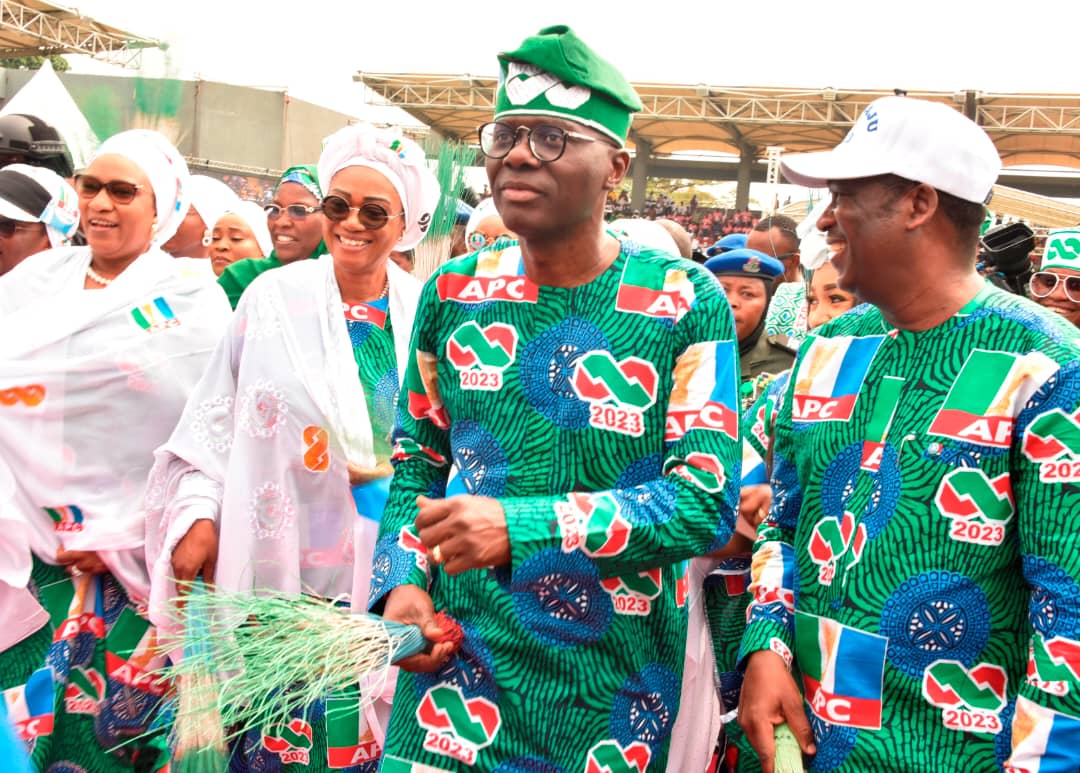 After the Yuletide break, All Progressives Congress (APC) in Lagos State returned to the campaign trail to drive support for the election of the party’s presidential candidate, Asiwaju Bola Ahmed Tinubu, and the re-election of Governor Babajide Sanwo-Olu.

The bubbling town literally stood still, as scores of artisans, youth groups, traders, students and community organisations trooped out in solidarity and joined the crowd of party supporters to receive Sanwo-Olu and his entourage for the campaign.

Lagos APC chairman, Hon. Cornelius Ojelabi, led the party’s senatorial leaders and candidates for legislative seats in the Badagry division to the rally.

At the political event, the Badagry residents had the opportunity to show their appreciation for the Federal Government’s approval of the construction of Badagry Deep Seaport – the effort which the Governor personally led.

Sanwo-Olu said the APC-led Government, in the last three and half years, had accorded priority to Babagry Division in infrastructural renewal and physical development, given the proximity of the area to international trade border.

The Governor said the ongoing construction work of Lagos-Badagry Expressway had progressed steadily without delay, noting that the project had moved beyond difficult terrain, especially in Okokomaiko where vehicular flyovers were being completed.

Sanwo-Olu said the design of the Lagos-Badagry road project had been reviewed to accommodate the proposed rail network along the axis. He assured residents that work would soon begin on the construction of Badagry Deep Seaport, which, the Governor said, would further catalyse economic growth on the axis.

He said: “Today, we have returned to Awori settlement in the Lagos West Senatorial District to render account of development activities we have brought to this area and use the opportunity to seek your support for APC in the coming presidential election and State Governorship election. Our party is fulfilling its promises and we’re ready to do more for our people on this corridor. We have visible evidence to support our achievements.

“In the last three and half years, we have delivered many projects in the Badagry Division, including a Mother and Child Hospital (MCC) and inner road projects in Badagry The General Hospital we are currently building in Ojo has progressed and we will be completing the project soon. Before we came in, there was only one university in this area. Now, residents can boast of two well-funded universities, which resulted from the upgrade the Adeniran Ogunsanya College of Education to a full-fledged University of Education.

“We have also delivered housing schemes in Badagry, just as we have accorded priority to the completion of Lagos-Badagry Expressway. This project is at the heart of our efforts to lessen the pain of transiting along the corridor. All bridges required for seamless traffic flow are being built on the corridor. We will be flagging off the second phase of the Blue Line from Mile 2 to Okokomaiko, which will be on a dedicated alignment already marked along the highway. We are set to energise a new economic hub in Badagry, with the securing of an approval for the construction of a new Deep Seaport.”

Sanwo-Olu assured the residents of his Government’s commitment to rehabilitate more arterial highways in the area. He disclosed that contracts for the construction of Ilufo-Mosafejo Road and Osideru-Adaleko-Era Road were on the verge of being awarded, adding that work had already started on Ijagemo axis, with some of the adjoining roads being comprehensively rehabilitated.

The Governor urged the residents to keep their faith with APC in the forthcoming federal and state elections, pledging that the party would reciprocate the support by bringing more democratic dividends to the area.

Sanwo-Olu said: “We are also not leaving out the youth in our planning and programmes. Our goal is to build young people and make them responsible citizens making a living in safe and secure neighbourhoods. Public transportation will be enhanced and health care services will be better than what it is. This is our commitment to you. When we come in again, we are ready to do more for the Badagry Division.”

Ojelabi, while addressing the crowd, said the faith of Awori ethnic stock in progressive party had yielded positive dividends, stressing that the Badagry division in Lagos had reaped many benefits of democracy.

The APC chairman, who hails from the area, cited establishment of two tertiary institutions within the division and approval of Deep Seaport development in the area, adding that APC-led Government had committed unprecedented attention to upgrade infrastructure, including reconstruction of Lagos-Badagry Highway.

He said: “Since the time of Chief Obafemi Awolowo, Awori people in Lagos have stood with the progressive party. Our faith in the progressive government has yielded positive change in the Badagry Division, where we now boast of two well-funded universities which have brought quality education to our doorstep.

“APC has evidently given a special attention to the Lagos-Badagry Expressway, which is now being reconstructed. This is a testament that APC is the party that understands people’s plight and is keeping its promises. There is an ongoing construction of a massive General Hospital project in the Ojo, which is going to be the first major healthcare facility in the Division.”

At the rally, thousands of supporters of Peoples Democratic Party (PDP) and Action Alliance (AA) decamped to the APC. The defectors were presented to the Governor by the Lagos APC chairman.