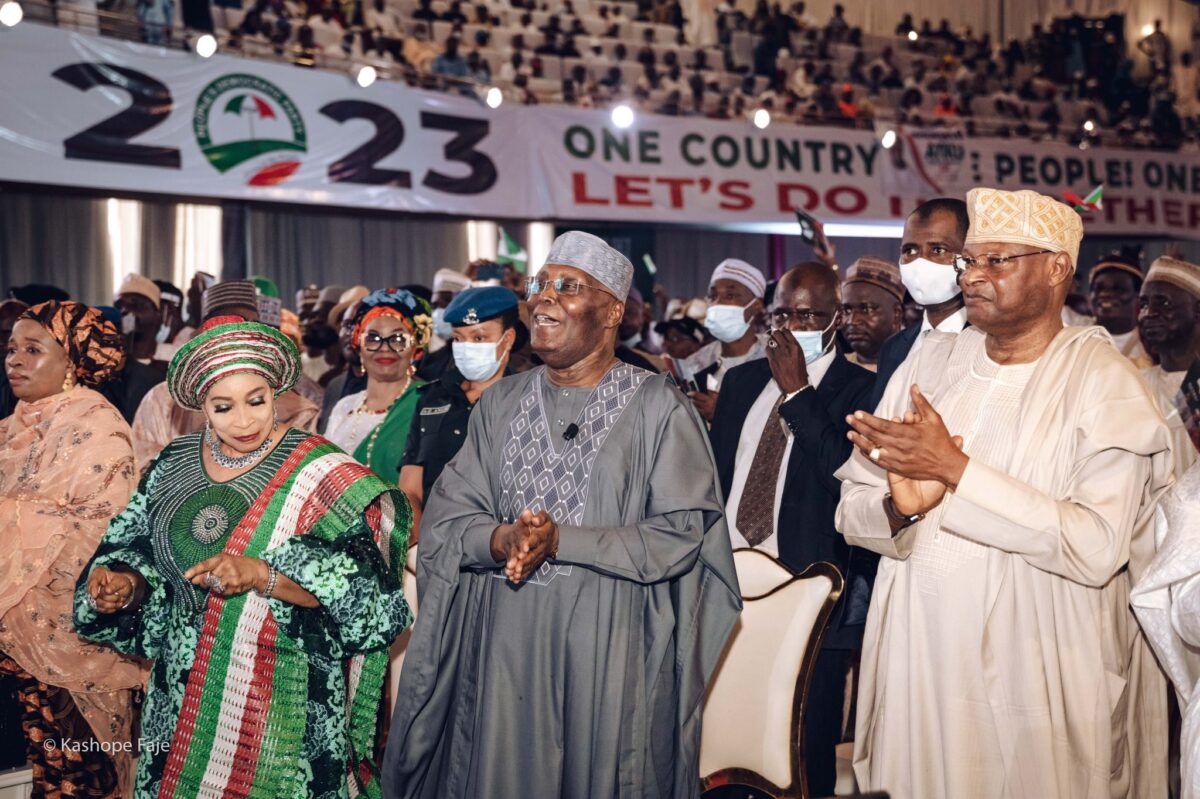 Alhaji Atiku Abubakar’s desperation for president of Nigeria, seems to be biting hard; even if the whole country perishes, he certainly doesn’t give a damn. All he wants is to be called President of the Federal Republic of Nigeria; even if it will hurt the very soul of the country’s attempt to build national cohesion and democratic stability. The desperation has gotten to a crescendo, that one would think Atiku has a magic wand to just wave, and bang, all our problems will be gone. He is clearly desperate, and it’s alarming. To see that his desperation has got to this unassailable level, such that he endorses anything; just anything, that he feels will be melody to the ears of the undiscerning. He declared without qualms that he will open all our borders; not minding the security implications. Politics can be played to certain levels, but not on certain issue like borders; porous borders and loose canons, spread across our geopolitical landscape. In the wake of insecurity, armed banditry and insurgency, declaring that all our borders would be open, is an invitation to worse national insecurity. It is unfathomable to contemplate playing politics on such a sensitive issue, knowing full well the carnage and destruction the country suffered in the hands of criminal elements who had been feasting on our porous borders in trans-national criminality. Our border with Niger Republic is porous. Our border with Benin Republic is also porous; ditto the Cameroun one and the Chad axis. With these borders closed to streamline operations around those areas, and reduce incidences of smuggling and proliferation of arms and ammunitions, some sanity was breathed into the system that was heavily compromised.

No discerning and well meaning presidential aspirant should play politics with our borders. Not at all. Atiku’s recent endorsements of so many proposals underscore, highlight and announce that we will be in serious trouble should he get unto the power rostrum (God forbid). He wants to privatise everything possible in Nigeria; to rehash his previous actions that messed up the Nigerian economy. His privatization idea destroyed landline telephony, and sent thousands of NITEL staff on compulsory retirement. They became impoverished by his wicked act of privatisation. NITEL became MTEL without a headway. Government bureaucracy became the order of the day. All the initial services that NITEL offered suddenly became moribund. As sophisticated as the UK is, they still maintain their landline services, which make room for other economic activities. When Atiku touched NITEL, he destroyed it abysmally leaving its carcass for impoverished staff to contend with. Additionally, he has been mentioning privatising NNPC to his friends and associates; persons who were part and parcel of the last profligacy. He talks about restructuring as if that is a passport to heaven. Also, he says he will end fuel queues as if there were no queues when he was Vice President. He raises the roof on so many issues, but once his tweet about Deborah comes into question, one sees the dubiety, that dubiety behind the open border plan of a heartless soul. He talks about solving unemployment challenges, but he hasn’t told us how. He talks about rebuilding our economy; with no clear-cut approach on ground. He is playing on our sensibilities.

Nigeria’s borders are not just porous but also heavily unmanned. When you visit some of these borders, you are most likely going to giggle at the sight of what we call “Border Post”; some crappy looking discrepit, make-shift tacky looking structure, with a handful of military presence. In some cases, you will see small trading around the borders and some overfed potbellied customs officials playing Ludo games or draft; to keep away boredom. Notoriously, Idiroko, Imeko, Badagry, and Borgu are often said to be busy with smuggling activities. Others are said to be just unmanned, expanse of land, which bandits have converted to their escape routes. Between Nigeria and Niger Republic, at the Zamfara and Sokoto ends, they are generously porous. Bandits find them attractive to operate in and ravage those areas as a result of this. When some of the borders were closed by the Buhari government, there was some respite; the benefit was felt. In the name of politics and trying to woo voters, declaring in such unfettered verbiage that the borders would be flung open as Atiku Abubakar has done, is an open invitation to more banditry and insurgency. It is irresponsible. Time and time again, security experts have stated that the porous nature of our borders have contributed in no small measure to the prevalence of bandits and insurgents who have strangulated our economy. To open up already porous borders, is double jeopardy.

Politicians must refrain from politicising serious issues that should define our nationhood; no matter how tempting. Atiku Abubakar’s desperation to answer a quick yes, to a lot of questions that require uncommon leadership and deep reflection to contend with, is a dangerous sign. Uncommon leaders are those who are prepared to take painful but well thought-out decisions in the interest of country. Sir, opening up the borders is an open invitation to bandits; a subtle genial way to tell bandits, “I will be nice to you”. That to me, is dangerous politicking at the height of desperation.
We must not allow Atiku Abubakar travel that route; of letting loose our doors to armed bandits and insurgents who have pillaged our nation for over a decade now. Even, his idea to privatise NNPC is not an attractive proposal if we are to follow the outcome of previous exercises carried out by Atiku Abubakar, when he was Vice President under Olusegun Obasanjo. The Aluminium Smelting Company in Ikot-Abasi, Akwa Ibom State is a ready example of how and why not to privatize a going concern. We haven’t heard any pleasant story about ALSCON since that exercise. Ditto others that suffered similar fate. We are suffering same fate with the power DISCOS across the country today. Cronies just assembled themselves and bought into enterprises they lacked the requisite basic knowledge of. Today, we are going round in circles as a result of that; power generation and distribution are still circling at a low ebb.

2023 is not a year for Atiku Abubakar. His aspiration offends the common sensibilities of a diverse nation like Nigeria. It will unearth several acrimonies and instabilities. Cries of marginalisation and exclusion will be heard from all corners. Excuse me if I sound superfluous, it bears repeating to state yet again, that balancing the power algorithm will serve our unity in diversity better than power domination by a particular part of the country. It is one thing to get power, but another to have the conducive atmosphere to use the power for the common good. In Nigeria, our diversities should be our strength; but recent happenings across the geopolitical zones seem to be pointing to something different for a country that is desirous of staying afloat, no matter the undercurrent and vibrations. With Atiku Abubakar, trying to play the spoiler role, he will railroad this country on the path of perfidy, just for his selfish gains. Balancing political power in Nigeria is an antidote to several cries of marginalisation and it would create the much needed conducive environment for robust national engagements, for our collective peace and prosperity. It bears repeating that after President Buhari’s eight solid years, power should come to the South for justice, equity and fairness. Politics and indeed DEMOCRACY are all about inclusion and representation. They are about getting more people involved in governance and ensuring that all key into what is at stake. The fragility and volatility in the Nigerian geopolitical space are hitting dangerous levels, making us more vulnerable to frictions, cracks and dissension. This is no time for a selfish man.

The free border economy plan of Alhaji Atiku Abubakar is an invitation to further chaos under an atmosphere that is heavily charged with criminalities. We cannot afford to open up all our borders at this time, when trans-national activities are fueling arms proliferation. We must deliberately and consciously put in place measures that would help up the game in this aspect of our national life. Nigeria is currently a challenged country, no doubt, with all manner of strangers and foreign nationals dominating the insecurity trade even at a time of border closure. Imagine the rate of criminality, if the borders were flung open as planned by Atiku Abubakar. One sure way to mitigate against the unholy activities of the insurgents and bandits is border closure, which has been proven to roll back quite a number of attacks under a system of growing insecurity concerns. An open border plan is cheap, hare-brained and unwitty. Alhaji Atiku Abubakar needs to think deeper and harder; there must be other solutions that will serve better. Needless to say that at this juncture, what Nigeria and Nigerians need is uncommon leadership and uncommon solutions; germane, fruit bearing actions for posterity. Asuwaju Bola Ahmed Tinubu has done it before; he will do it again. Let us all vote for him for a renewed Nigeria.