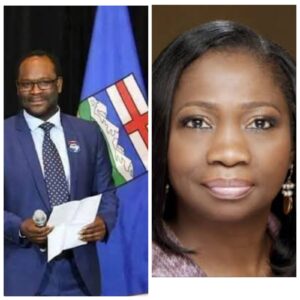 The Chairman/CEO, Nigerians in Diaspora Commission (NIDCOM) Hon. Abike Dabiri-Erewa has congratulated
Mr Kaycee Madu, a Nigerian based in Canada, on his appointment as the first black Minister of Justice and Solicitor General for the government of Alberta.

In a congratulatory message, Dabiri-Erewa expressed delight that Madu had proved his mettle which earned him the exalted position.

According to a statement by the Head of Media and Public Relations Abdul-rahman Balogun, the NIDCOM Boss said “We are so happy for Mr Madu on his well deserved appointment. This confirms our saying that our Diasporans are our greatest asset making us proud globally”

She advised Madu to continue to give his best in the administration of justice, urging others to emulate such an excellent behaviour.

Hon. Dabiri Erewa reiterated that the appointment of Madu as Minister of Justice was a reward of consistent hard work, dedication and determination to succeed in his chosen career irrespective of the fact that he was in the foreign land.

She prayed for his success in the new global assignment and canvassed for support and cooperation from all stakeholders to make him successful in his assignment.

In this role, Madu, as Minister of Justice will also be the Provincial Secretary and Keeper of the Great Seal of the Province of Alberta. 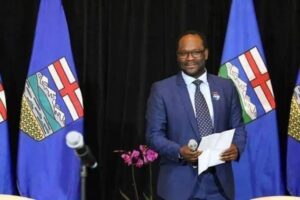 In 2019, Madu made history by becoming the first African-born provincial Minister in Canadian history.

In 2020, he makes history again as the first Black Justice Minister and Solicitor General in Canada.