Coys At The Mercy Of CAC For Public Procurement Engagement 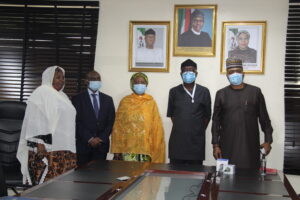 Abuja – The Registrar General of the Corporate Affairs Commission (CAC) Garba Abubakar, says the commission must play a part in the nation’s public procurement processes, to ensure that only companies deemed fit are engaged.

Abubakar, said this would checkmate identified abuses by introducing and adopting letters of good standing issued by CAC as part of the requirement for public procurements.

The RG, said this when the Ademola Seriki led CAC’s Board met with the Minister of Industry, Trade and Investment, Otumba Richard Adeniyi, as well as the Minister of State, Amb. Mariam Katagum in Abuja.

The RG, Said this would be the first review of the law and regulations of companies and allied matters in the last 20 years, noting that many countries have change their laws more than five times in this area.

He said the Commission would come up with regulations that will define certain transactions, particularly regulations of modern articles of association.

“We had the former law which was not extensive enough because various companies have been complaining and the provisions are not well encompassing.

“Now that we have the opportunity to come up with regulations on articles, it will go a long way in bringing a better governance structure for most of the companies and if we do well, companies don’t have to submit their own articles for registration”, Abubakar said.

On his part, Minister of Industry, Trade and Investment, Otumba Richard Adebayo, said the Companies and Allied Matters Act (CAMA) recently signed into law would transform the business environment.

The minister said the implementation of CAMA would help Nigeria move up the ladder of the World Bank’s Ease of Doing Business Index as the law would further dismantle bottlenecks in business registration.

Also speaking, Board Chairman of CAC, Ademola Seriki, said the country would witness an improved business environment in the area of Commerce and Industry as well as Financial/ Capital Market.