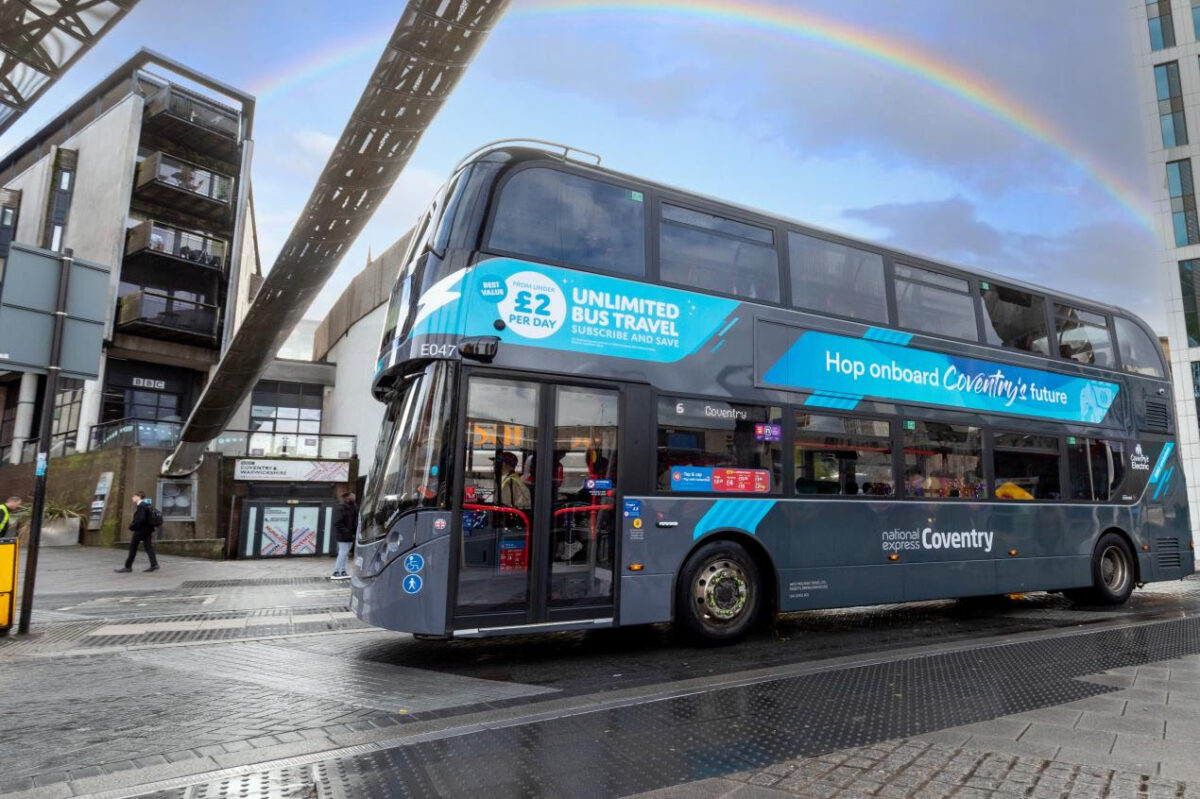 A £150 million project to create the UK’s first all-electric bus city by 2025 has taken a major step forward with 50 new greener buses on the streets of Coventry.

Transport for West Midlands (TfWM) has been working with Coventry City Council on the scheme and has secured £50 million Department for Transport funding to develop charging infrastructure and to top up the investment being made by bus operators in upgrading their fleets with electric vehicles.

This will include upgrades such as charge points at bus depots across Coventry and Warwickshire.

The 50 new National Express Coventry double-decker buses are the first of up to 300 new vehicles due to arrive over the next three years under the pollution busting ‘Coventry’s Electric’ programme. National Express has also invested over £60m, meaning over a third of its Coventry fleet is now electric, with another 80 committed for early 2023.

Coventry will see improved air quality and reduced greenhouse gases, and passengers will benefit from a fleet of brand new, comfortable and fully accessible buses. 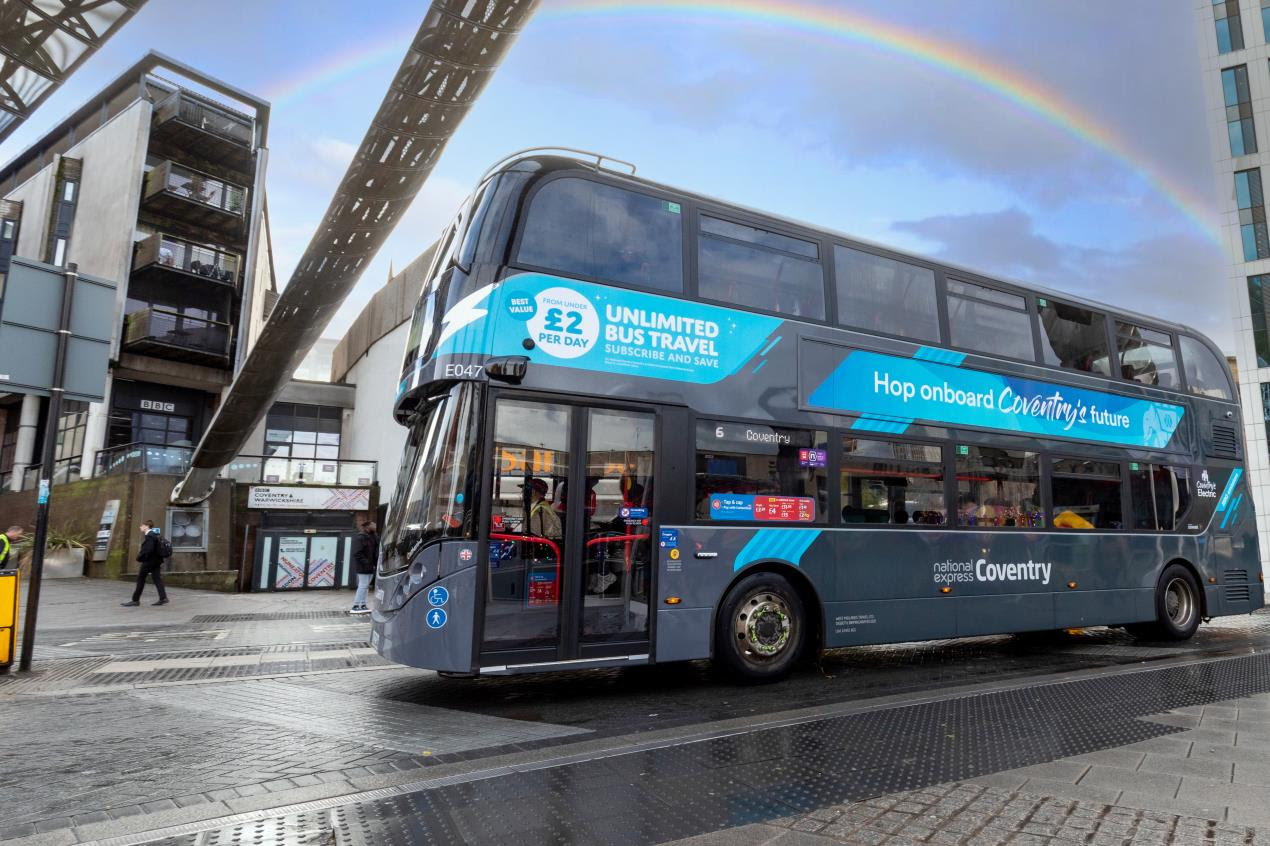 Andy Street, Mayor of the West Midlands, said: “Local people are now starting to see these wonderful buses on the streets of Coventry – offering them a quieter, smoother and more comfortable journey.

“As we seek to tackle the climate emergency and maintain our #WM2041 net zero commitment, these British made buses are saving energy, cutting fuel costs for operators and improving our air quality.

“I cannot wait to see even more electric buses arriving in the next few years as Coventry becomes a truly all-electric bus city.”

Tom Stables, CEO National Express UK, added: “Our vision is to become the UK’s most sustainable bus and coach company and it’s been great to see this month’s COP27 putting a real focus on how businesses can play their part in addressing climate change.

“We’re proud and excited to be leading the way in making Coventry all-electric and are actively recruiting new drivers to join us in the green revolution. Full training is provided and we have recently launched new pay rates of up to £29,500, or more with overtime.” 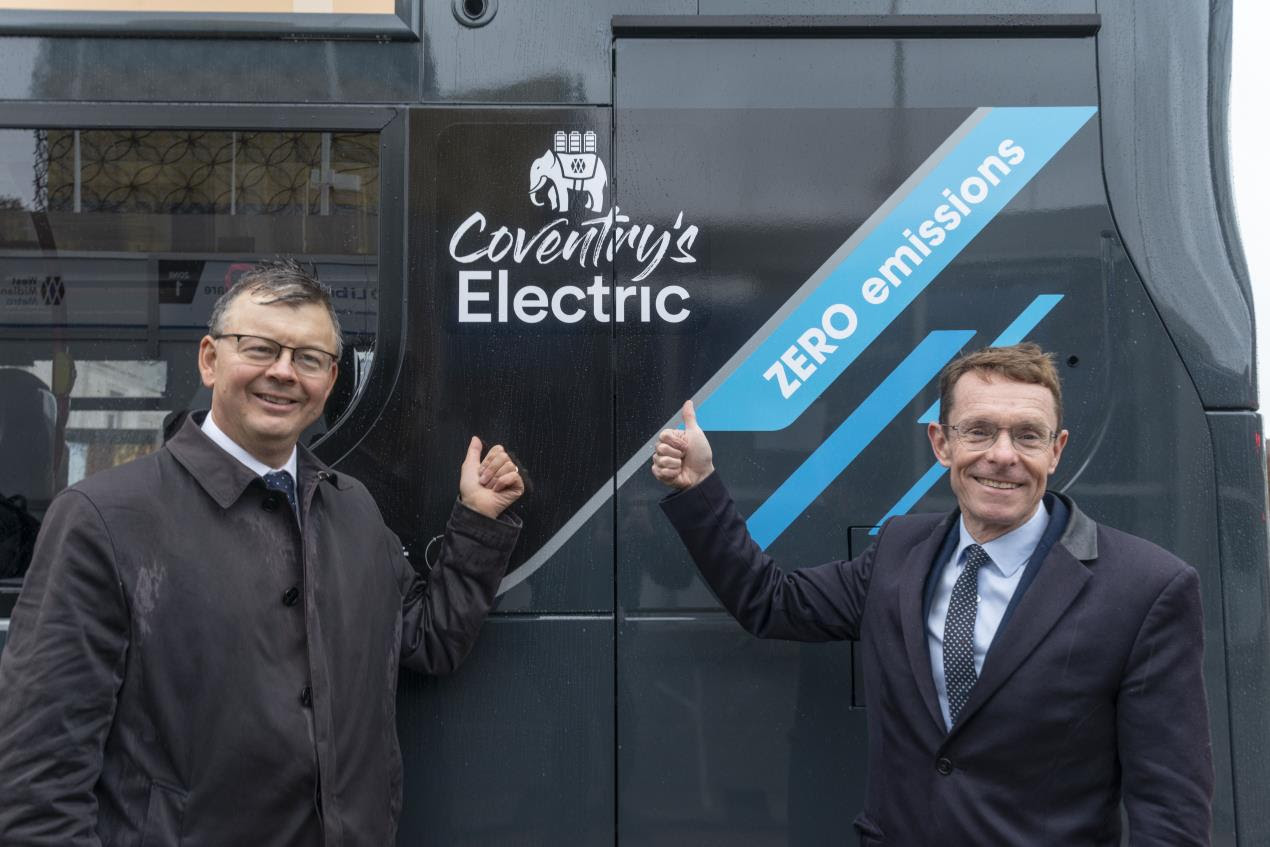 The city already had 10 all-electric buses operated by National Express so this brings the total number of buses in the city to 60.

Cllr Jim O’Boyle, Coventry City Council’s cabinet member for jobs, regeneration and climate change, said: “We put the bid together and convinced the government that Coventry is the right place to become an all-electric bus city.

“Hitting a milestone of 50 new all-electric vehicles is fantastic and the city is really gearing up to creating the right infrastructure for the increase in zero emission vehicles.

“A quarter of the council’s fleet are now all electric, and we have 607 charging points in the city – more than any other city outside of London.

“This is all part of our joint efforts to help lead on the green industrial revolution and cut our carbon footprint. There are a number of partners involved and it highlights the excellent joint working relations between the different organisations involved.

“We are very proud to say that Coventry will be the country’s first all-electric bus city.”

The electric bus fleet is just one part of TfWM’s plans with new rail, bus, tram and cycle routes being developed and new technology introduced to support the West Midlands in achieving its #WM2041 target and become a net-zero carbon region within the next two decades.

Not only will Coventry become the UK’s first all-electric bus city, but TfWM, which is part of the West Midlands Combined Authority (WMCA), has committed to a fully zero-emission region by 2030 in its Bus Service Improvement Plan.

“The introduction of additional new electric buses by National Express is another crucial milestone towards realising a zero emission bus fleet and level up green transport up and down the country.”

The new British buses, built in Falkirk by Alexander Dennis, are part of a total order by National Express Coventry of 130 ADL E400EVs on a BYD chassis.

Zenobē, EV fleet and battery storage specialist, is providing Electric Transport-as-a-Service (ETaaS) to National Express Coventry with its end-to-end solution. This includes on-board replacement batteries, the charging and grid infrastructure system at the depot, with

dedicated rapid chargers, and a software platform which helps monitor and optimise energy

use, as well as parts and operational support.

‘green’ energy thanks to solar panels, and a second-life battery installed at the depot by

Zenobē. They take four hours to charge and can run for up to 280 km depending on the time

As part of the West Midlands Bus Alliance, National Express Coventry, Stagecoach and other bus operators work closely with TfWM, Coventry City Council and Warwickshire County Council to provide reliable, affordable and green bus services to residents and visitors across the city.

Steven Meersman, co-founder and director at Zenobe, said: “We’re delighted to announce that50 of the 130 new e-buses and charging infrastructure have been delivered and integrated on-time and at pace, and are now out on the roads of Coventry.

“It’s a pleasure to work with innovative partners at Transport for West Midlands and National Express UK to deliver the first Electric Transport as a Service (ETaaS) contract in the electric bus sector, offering a ready to go electric bus fleet backed up by operational guarantees, so they can focus on their fantastic customer service and day to day operations.”

The announcement came as Chris Skidmore MP visited the region on behalf of the government as part of his national review of the UK’s net zero targets and plans. He heard how the region intends to build on its climate change action by seeking greater powers from central government and also met with business representatives from leading Black Country companies to discuss their decarbonisation challenges.