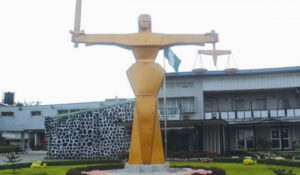 Justice Muslim Sule Hassan of the Federal High Court in Lagos has set aside an ex-parte order freezing the bank accounts of a member of the Board of the Nigerian Communications Commission (NCC), Mr. Clement Omeiza Baiye and two others companies, Verity Communications Limited and Verity Associates Limited.

Baiye was joined in the suit for being a Director of the Capital Consortium Limited (first defendant) when the facility was granted to the company by the defunct Intercontinental Bank while his companies were sued based on him being a substantial shareholder of the companies.

By the statement of claim, the above sum includes interest from the original loan of the sum of N49,282,127 which was later purchased by AMCON.

In his application, Osipitan argued that the interlocutory orders were unconstitutional and oppressive of the applicants given the circumstances of the case.

He submitted that the interlocutory orders were in violation of the applicants’ constitutional and fundamental rights and consequently irregularly granted and liable to be set aside.

He stated that there were no duly certified copies of relevant documents/exhibits attached in support of the application for ex-parte interlocutory orders granted by the court.

Osipitan further argued that the computer generated exhibits ACC4 attached to the ex-parte application which resulted in the interlocutory injunctive orders did not comply with Section 84 of the Evidence Act on computer generated evidence and therefore inadmissible.

Osipitan urged the court to grant the application and set aside the freezing order.

But, lawyer to AMCON, Chris Eze submitted that the defendants are not entitled to the reliefs sought on the grounds that the facts in support of the motion are incompetent for delving into the merits of the case vide an interlocutory application.

He argued that if the motion is granted, the accounts and assets of 3rd, 6th and 8th defendants shall be lost as a result of being pillaged there by foisting on the court a fait accompli.

He further submitted that the condition precedent was satisfied before the granting of the ex-parte order; and that AMCON’s matters are sui generis as enshrined and preserved by the constitution.

In his ruling, Justice Hassan held that the ex-parte order was obtained based on copies of public documents not certified and inadmissible in law.

“The law is trite that you cannot put something on nothing and expect it to stay there, it will collapse.

“Exhibits ACC1-5 are public documents which provided the platform for the grant of the ex-parte application were not certified contrary to the provisions of Sections 102, 104 and 105 of the Evidence Act. The instant application is meritorious and it is hereby granted,’’ the court held