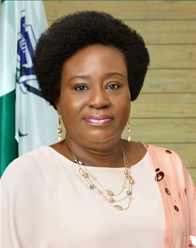 A Civil Societies Organisation under the aegies of Coalition of Civil Society For Equity, Justice and Good Governance has issued a five days ultimatum to the  Head of Civil service of the Federation Dr Folashade Yemi Esan to vacate her office over her gross misconduct in office.

The Group made the call in Abuja  during a peaceful protest at the expiration of the initial seven days  ultimatum given to the head of service to vacate office last week.

Co-Convener of the group, Danesi Momoh while addressing the newsmen alleges that the Head of service is approving massive secret recruitments while at the same time making Nigerians believe that there is an indefinite embargo on employment.

He also noted that circular in which the head of service used in placing embargo on employment is adversely affecting the nation’s tertiary institutions which are currently suffering dearth of qualified academic and non- academic manpower.

Speaking further, the Co-Convener said  that the response of the  head of service to the allegegations laid against her are not  substantiated with facts.

He submitted that the group will take more stringent actions if she fails to honorably resign or the Federal Government fails to sack her from office.

ECOWAS, AU, Should be more proactive to The Plight of Africans – Mabiaku.
Previous Post
SANWO-OLU FELICITATES OBASANJO AT 85