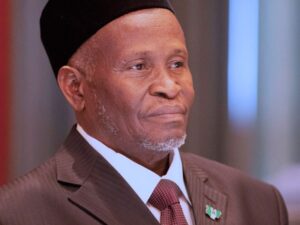 The Chief Justice of Nigeria (CJN), Justice Ibrahim Tanko Muhammad, over the weekend, led 18 Justices and senior officials of the Supreme Court on a condolence visit to the family of the late Justice Sylvester Ngwuta, who passed away on March 7, 2021.

A statement signed by the CJN’s media aide, Mr Ahuraka Isah, on Sunday noted that among the apex court officials on the entourage of the CJN was the Chief Registrar, Mrs Hadizatu Mustapha.

Isah further noted that the CJN and his brother Justices were received by Justice Ngwuta’s cousin, Chief Nwali; his brother, Stephen Ngwuta and his daughter, Chidera Ngwuta.

In a brief remark, the CJN described the late jurist as a complete gentleman who won’t hurt anyone.

‘’He was highly dedicated to his duty and would definitely be missed by many people. May His Lordship’s soul rest in peace and may God Almighty continue to protect and provide for the family he left behind,” the CJN said.

Responding on behalf of the family, Chief Nwali thanked the CJN and the Supreme Court for their support, saying the apex court has been taking care of the deceased from the day he fell sick, both physically and financially until his demise.

‘’Up till date, the court has been supportive of the family as regards arrangements leading to the burial of the deceased. We pray for the delegation, just as we will forever be grateful for the kindness and support extended by the court,’’ he said.

The CJN subsequently signed the condolence register on behalf of himself and his brother Justices.

His remains have been deposited at the National Hospital mortuary pending the conclusion of the arrangements for his burial.