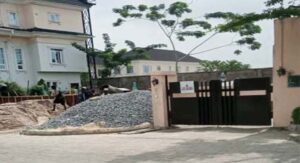 A businessman, Mr. Adedayo Mumuni Shittu, has recovered from an “unknown individual”, his plot of land at Block B Plot 2 Victory Park Estate Igbokushu, Lekki Phase I, Lagos, following a court order.

Shittu’s lawyer, Ojumetor Agha of Pistis Partners LLP, said the recovery, which occurred at the weekend, was in execution of a Lagos High Court injunction restraining a Receiver-Manager appointed by the Asset Management Corporation of Nigeria (AMCON) from encroaching on the land.

Justice Kudirat Jose had on October 24, 2019, dismissed AMCON’s notice of preliminary objection and granted an interlocutory injunction in favour of Shittu and More & S A More Limited authorising them to protect their interest in the property at Victory Park Estate.

But, on December 15, 2020, a three-man panel of the Court of Appeal with Appeal Court President, Justice Monica Dongban-Mensem presiding, dismissed AMCON’s appeal and affirmed Justice Jose’s grant of interlocutory injunction in Shittu’s favour.

Agha said following the discovery that an unknown individual was attempting to seize Shittu’s property, he petitioned the Deputy Inspector-General of Police, Force CID, Area 10 Garki, Abuja on March 28, 2021, inviting the police to investigate the ‘Flagrant disobedience of court orders, threat of violence, unlawful interference’.

According to the petition, sometime in September 2017, AMCON officials claimed ownership of plots in the estate and asked the occupants to repurchase their plots. But Shittu’s plot was spared.

He said Shittu discovered that the Receiver-Manager was appointed “to take over the company which was our client’s predecessor in title (Knight Rook Ltd) and its assets due to its indebtedness to some banks. The said debt had been assigned to AMCON.”

From August 2019, the Receiver-Manager required all owners of plots, including Shittu, to repurchase the various plots which they acquired in Victory Estate from Knight Rook Ltd.

Agha said: “Our client was constrained to commence a civil suit against the aforementioned Receiver Manager at the High Court of Lagos and subsequently obtained an order of injunction restraining him from encroaching on the land.

“The aforementioned order was also affirmed by the Court of Appeal in a judgment which was delivered on the 15th of December 2020.

“However, during a routine visit to the land on the 22 of March 2021, our client discovered that some unknown persons had encroached on the land and were about to commence construction work on a foundation for a building.

“Consequently, we filed a petition against the said persons at the Land Grabbers Task Force in Alausa on the March 23, 2021. After processing the Petition, a stop-work order was issued by the task force directing the person to report to their office for interrogation connected to our client’s pavilion.

“To our chagrin and utter dismay, the said persons have ignored the directive and have continued with the construction work. These persons also have some policemen stationed within the Estate who are aiding their unlawful actions.”

Following the petition, Agha said, the police intervened and Agha executed the court order and recovered possession of the property.