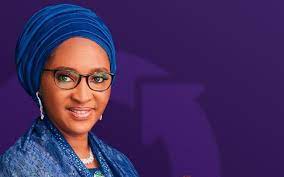 The Senate Monday gave the Minister of Finance, Budget and National Planning, Mrs Zainab Ahmed, clean bill of health on alleged insertions in budgetary provisions of some Ministries, Departments and Agencies (MDAs).

This is as it frowned at shoddy implementation of the National Social Investment Programme (NSIP) based on lack of records of verifiable beneficiaries.

Finance Minister got her clean bill of health on alleged series of paddings in the proposed N20.51trillion 2023 budget from the Senate Committee on Appropriation when she made clarifications on them.

She explained to the committee that the various sums some heads of agencies feigned ignorance of during their interface with relevant committees for budget defence , were approved by the Federal Executive Council ( FEC),  before budget presentation itself by President Muhammadu Buhari on Friday , October 7, 2022.

” Most of these sums are bilateral or multilateral loans captured in the budget of agencies selected for projects execution for sole purpose of transparency.

” The totality of such loans captured in the proposed budget of the relevant agencies is N1.771trillion.

” Had heads of the affected MDAs carried out thorough scrutinization of their approved budgetary proposals, the issue of insertion or budget padding wouldn’t have arisen at all, realization of which made the Minister of Defence , Bashir Magsshi to apologise after feigning ignorance of N8.6billion in his Ministry’s budget during interface with Senate Committee on Defence “, she said .

Satisfied by her submission, the Chairman of the Committee, Senator Jibrin Barau (APC Kano North), said the clarifications made by the Minister were well understood by all the committee members and commended her for ensuring transparency with capturing of such loans or grants in the budget.

Earlier at an interface with the Senate Ad – hoc committee on uneven disbursement of N500billion Development fund by the Development Bank of Nigeria (DBN), the Minister of Humanitarian Affairs, Hajiya Sadiya Umar Farouq, failed to supply the the committee with verifiable evidence of beneficiaries.

She said about 9.8million pupils nationwide are already benefiting from the School feeding programme on the rate of N100 per meal, aside beneficiaries of other clusters of the programme .

But the Chairman of the Committee, Senator Sani Musa and other members like Ayo Akinyekure , Uche Ekwunife , Mathew Urhoghide etc , told the Minister that her presentation and that of the Coordinator of the program , Dr Umar Bindir , were beautiful on paper but lacked substance .

The implementation of the program according to them, is a nullity.

Consequentlty, the Committee directed her to furnish it with names of beneficiaries of different clusters of the program, their contact address, telephone numbers on the basis of states, local government and wards within the week.