Women in the Niger Delta region on Wednesday praised Senator Godswill Akpabio for contributing immensely to the social, economic and political development of the country.

‘’The picture in the Niger Delta region is different. It has been thirty months of development and clear evidence of competence’’. 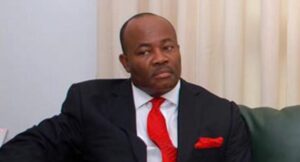 A statement issued in Port Harcourt by the spokesperson of the Niger Delta Women Reconstruction Group (NDWRC), Dr. Anitorufa Peremoboere commended the Minister of Niger Delta Affairs for his exceptional commitment and performance.

The statement hailed Akpabio for shouldering the heavy responsibility with calmness, giving his best for the good of the Niger Delta people and pursuing with vigour and determination the change agenda of the current administration.

The women applauded Akpabio for accelerating the growth of the region, strengthening administrative infrastructure, improving staff quality and efficiency and working in complete harmony with the National Assembly.

‘’No state is shut out in the ministry’s development agenda’’

They praised the former Akwa Ibom State governor for using his expertise and intellectual capacity to address long standing challenges in the region.

‘’We need Senator Godswill Akpabio in 2023. The former Akwa Ibom State governor will not run out of Nigeria. We’ll put pressure on him to take part in the 2023 election. His name will be on the All Progressives Congress (APC) presidential primary ballot’’

The women also commended him for raising the standard of living of the people through water and electrification schemes, road development, education and health-care delivery.

‘’We are most grateful to Senator Godswill Akpabio for the peace of the region, construction of roads and drainages and the well-being of the people’’

The women urged Akpabio’s critics to reckon with the realities, cease advertising ignorance and living in a fool’s paradise.’

‘’Akpabio’s critics do not believe in development for the Niger Delta region.

The statement also underscored the mad ambition of some politicians to mount the saddle of NDDC leadership and to share the resources to themselves and cronies.