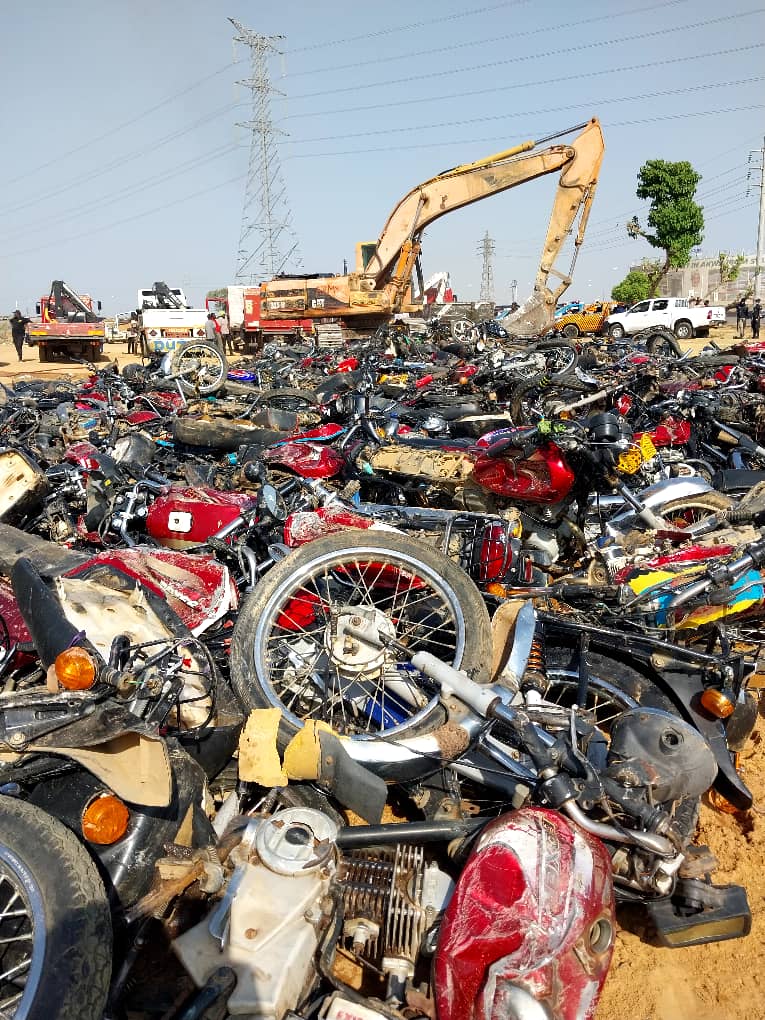 The Federal Capital Territory Administration Enforcement Team on Okada ban and other forms of Violations in the Nigeria capital on thursday crushed a total of 432 Motocycle along the Abuja Airport Road.

This is in Furtherance of the policy on immediate confiscation and crushing of commercial motorcycles otherwise known as Okada plying within the nation’s city centre and other prohibited places.

In particular, the team accompanied by operatives from Police, military and paramilitary stormed and ransacked Okada operators caught while operating in the area, thereafter, a total of 432 motorcycles were crushed.

Top officials of FCTA, and heads and representatives of various security agencies including paramilitary organisations domiciled in the FCT observed the crushing exercise, which took place inside an open space at Lugbe Car Wash, along the Airport road corridor.

Reacting to the development, Chairman taxi operators, Car Wash Bus Stop in the area, Adebola Oluomo, said without the exercise, the road will be closed, as there are a lot of obstructions due to the activities of the defaulting Okada operators.

In his words, “They are always on the expressway riding recklessly against the traffic, and nobody could control them, and if anyone talks to them , they will stab you with a knife.

“The taskforce are always coming around, but the Okada operators will be stoning them, as they believe that they are the owners of Abuja.

“So, the government should continue with the exercise, as if it is like that Abuja will be very clean and the road will be safe for all.”

Explaining the exercise, Secretary, FCT Transportation Secretariat, Abdullahi Adamu Candido, reiterated that the government will not relent on the reinvigorated effort to rid the city of the menace.

Candido warned the operators and owners of commercial motorcycles to keep off the major roads of Abuja, especially the city centres and the gateways into the FCT.

Also speaking, the Senior Special Assistant to the FCT Minister on Monitoring, Inspection and Enforcement, Ikharo Attah, the choice of the location for the signature exercise was in order to send a strong signal to the perpetrators in a different direction, adding that as long as they remain recalcitrant, the FCTA remain resolute to clamp down on them.

He said: “During the raid, we got okada totalling about 432 for today, and we are hoping that with the resolve of the DRTS, we will see more impounded.

“The Airport road is the gateway into Abuja, and what people see is what they describe as Abuja. Seeing Okadamen riding against traffic into the city, being so unruly and breaking the law at will paints Abuja in a very bad light. This is why the Minister of the FCT resolved that we must get them off the highways especially the Airport road and the Bill Clinton Drive.

Aviation Stakeholders has called for increase investment and collaboration on to the sector as part of the strategy to salvage the nation’s troubled economy.
Previous Post
DINGYADI URGES NIGERIANS TO SUPPORT NIGERIA LEGION.