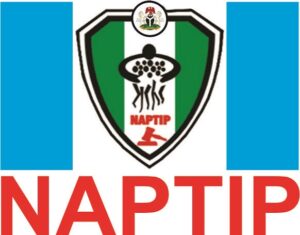 The National Agency for the Prohibition of trafficking in Persons (NAPTIP) has said that available records show that well over 70 percent Reported cases of human trafficking happens internally within the borders of Nigeria.

Speaking at the 37th session of the State House Briefing organised by the Presidential Communications Team at the Aso Rock Presidential Villa Abuja, The Director General of NAPTIP, Dr. Fatima Waziri – Azi said the agency is currently dealing with the surge in internal trafficking which has become a major concern for the Government.

In her words, “we have a surge in internal trafficking. And like I said in my presentation, most times, we spotlight issues on external trafficking; but I know, the data we have in NAPTIP, say three years old data now, the percentage was 75% across the state trafficking going on in Nigeria.”,

The NAPTIP Boss added that the reports show that those trafficked within states in Nigeria stands at 23%, while 2% of the cases are the ones across borders.

Speaking Further Dr. Fatima Waziri said “The truth is, when you talk about migration, it’s part of Africans, and because of the Economic situation, people tend to move. So in my presentation, I talked about socio economic situations that NAPTIP does not have control over.”

“And that has to do with issues of poverty, lack of educational opportunities, job opportunities, and also greed, you know, greed, people saying, oh, I want to go look for greener pastures, forgetting that the grass is only as green as you water it. So these are factors that we don’t have control over, and these are root causes of trafficking in persons as well as smuggling of migrants.”

Speaking on Funding for the Agency, the NAPTIP Boss said though “No matter the amount of money allocated to the agency or you  give anyone when you talk about trafficking in persons, It don’t think it will ever be enough, but the agency enjoys a lot of goodwill from other sister agencies, Donor Organizations, The Armed Forces and Nigerians.”

On the Mechanism put in place to prevent the Possibility of re-trafficking rescued victims Dr. Waziri-Azi said, “for us in NAPTIP, what we do obviously, we have a database of survivors that pass through the system. And we try to, check once in a while, then we’ll also offer a lot of rehabilitation and empowerment opportunities. And in my presentation, I also talked about NAPTIP, over the years, sponsoring 16 victims of human trafficking to university. And we do that just to enhance their employability.

Responding to the question on organ trafficking, the DG said “In terms of organ trafficking. Well, organ trafficking is, of course, one of the emerging trends. But this is an area that we still need to do research, real research. But last year, a report was released by Interpol and that report highlights Nigeria as an origin, transit and destination country for trafficking in persons for organ removals.

“And this is basically because there is a global shortage, for human for organs to be used for ethical transplants. We’re talking about demand and supply and that is what has driven that whole underground enterprise when it comes to to organ trafficking.

“ There is a report that was released by one of these UN agencies in the black market, a kidney goes for over 250,000 US dollars. So it is a thriving business. And there is an entire value chain that has to do with organ trafficking.

“Then the other part of it are people who get fished to donate the organs. People targeted for organ trafficking are mostly adults, because of course your organs are fully formed. So children are not being targeted. Then you have cases of people willingly agreeing to donate a kidney or donate a liver or donate part of your lung for a fee. And it thrives because of misinformation and disinformation.

“So you have traffickers who come up to you and tell you, ‘why are you suffering, you know, come and donate your kidney. After all, as an adult, you only need one kidney to survive.’ And it’s not true. They don’t tell you that. If you have pre-existing conditions, there is a possibility that if you donate one kidney the other kidney will not even last.

“And they also tell you that there’s a possibility that your kidney will regenerate that it would grow back; there is no scientific backing to that. So there’s a lot of misinformation and disinformation driving organ trafficking. So we need to keep churning out information about it because if an adult really wants to go donate his kidney, we can’t stop that person. But we can only give that person the kind of information that if that person has, the person definitely won’t board a plane to go donate their organs. So this is an area that we’re still researching.”