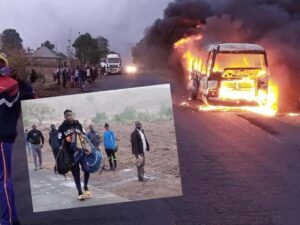 The players of Wikki Tourists Football Club of Bauchi State escaped death on Thursday morning as the bus conveying the team to Uyo, the capital of Akwa Ibom State for a match fixture with Dakada United of Akwa Ibom was involved in an accident. Secretary of the club, Abdullahi Ibrahim confirmed the incident, disclosing that the accident occurred at Hawan Kibo, Plateau State, this morning. “Yes one of the tires of the bus burst and the vehicle was engulfed by fire. Fotunately the vehicle did not somersault and all the players and other occupants were able to espcaope through the windows of the bus. No one was hurt but the players and the occupants are in shock. “Thank God no one is hurt but the players are in the shock because they all escaped out of the windows of bus but all their match kits, jerseys, boots were burnt to ashes. They are still at the scene of the accident waiting for help. We have spoken with Plateau United to assist us with a bus to convey our players home because they are in shock,” he said. The Secretary of the club said he did not know whether the scheduled match with Dakada will be postponed or not, saying he is in communication with Abuja for further action. “The match was to be played this Saturday and was supposed to be a live match but now with this accident we don’t know. We don’t know for now because even if they are to play the match, will they play barefooted? “There was nothing that was removed from the bus. We have yet to ascertain the extent of loss but all their bags, items, kits , jerseys were all burnt. The items are usually gathered at one corner in the bus whenever they are travelling,” he added.