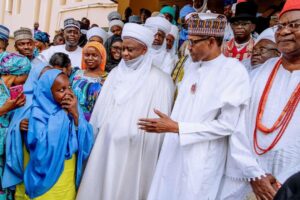 The Sultan of Sokoto, Alhaji Muhammed Sa’ad Abubakar III, at the weekend charged Nigerians to embrace inter-religious harmony to ensure peace in the country.
He has also directed Muslims to look out for the crescent (moon) of Ramadan from today.

Abubakar, at the inauguration of a 1,800-seat capacity Anyigba Central Mosque built by a former Governor of Kogi State, Alhaji Ibrahim Idris, also prayed that the excellent relationship between Muslims and Christians in the state would continue to be strengthened to ensure peace not only in Kogi but the entire country.
He thanked the people of Kogi State for the inter-religious harmony in the state and urged other Nigerians to emulate it.

The sultan, who is the head of the Muslims in Nigeria, called on Muslims to see the building of mosques as a way of moulding spiritual characters of the upcoming generations.

He said: “I am very happy to see the mutual relationship between Muslims and Christians in Kogi State because for a leadership of Christians community to be in attendance when a mosque is being commissioned clearly shows the understanding, love and togetherness that has bound them in the state.
“This has shown what we should do as one community created by God Almighty and it is high time we learnt from the relationship that exists in Anyigba between the Christians and the Muslims faith.

“We prayed that this relationship will continue to strengthen so that we can have peace not only in Kogi but the entire country at large.”
The sultan commended Idris for building the mosque, saying that it attested to the fact that the edifice must have been conceived over time and not an idea that began now.

Earlier, Idris had said his charity and community development projects were part of his way of showing appreciation to God for His love and blessings.
He stated that his involvement was not because he had too much money but because “God has been good to me all through my life. I know I cannot pay Him for his superlative mercies to me”.

Also speaking during the occasion, the Bishop of Idah Catholic Diocese, Most Rev. Anthony Adaji, who led the clergymen drawn from all Christian denominations across Kogi East Senatorial District, commended the former governor for his decision to advance the worship of God.

He tasked Nigerians to always see themselves as brothers and sisters, saying part of the reasons, why crises and insecurity continued to linger in Nigeria, is the high level of indoctrination in places of worship.
The ultra-modern Anyigba Mosque in Dekina Local Government Area of Kogi has an auditorium, offices, as well as 30 male and 50 female toilets. It also has a school and was built on a 1.3-hectare of land.
Meanwhile, the sultan has directed Muslims to look out for the crescent (moon) to herald the commencement of Ramadan from today.

Abubakar, in a statement yesterday by the Chairman, Advisory Committee on Religious Affairs, Sultanate Council, Sokoto, Prof. Sambo Junaidu, said: “This is to inform the Muslim Ummah that Monday, April 12, which is equivalent to the 29th day of Sha’aban 1442AH shall be the day to look for the new moon of Ramadan 1442AH.

“Muslims are, therefore, requested to start looking for the crescent moon on Monday and report its sighting to the nearest district or village head for onward communication to the sultan.’’
Junaidu gave telephone numbers that could be used directly to report the sighting of the new moon to the committee to include 08037157100, 07067416900, 08066303077, 08036149757, 08035965322 and 08035945903.
The News Agency of Nigeria (NAN) reported that Ramadan is the ninth month of the Islamic calendar observed by Muslims worldwide as a month for fasting, prayer, reflection and assisting the needy.