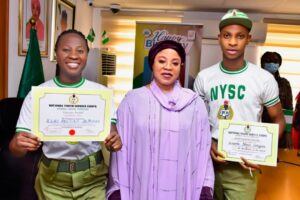 In it’s continued efforts to reward hard work and selflessness for Corps members observing their one year mandatory Youth Service in the Nation’s Capital, the Federal Capital Territory Administration has given Automatic employment to two corps members of batch B 2019, Miss Ilori Ayotola Deborah, batch number FCT/19B/5861 and Mr. Ilozumba Patrick Chiagozie, batch number FC/19B/6140, for their outstanding performance during their one year mandatory youth service in the territory.
The corps members also bagged ministerial award in recognition of their immense contributions to rural communities especially during the peak of COVID-19 pandemic.
Presenting the award to the deserving corps members, FCT Minister of State, Dr. Ramatu Tijjani Aliyu, commended them for exhibiting what she described as “consciousness and selflessness” during their one year mandatory service.
According to a statement signed by her media aide Austin Elemue, the minister used the occasion to pledge that the FCT Administration would continue to appreciate those who have worked hard to promote the unity of this country especially during service year, stressing that the NYSC scheme has continued to foster unity among different ethnic nationalities in Nigeria.
In her words, “Today marks another milestone in the history of our younger ones especially the two outstanding corps members. During the processes of growth, we all look forward to a time when we will be appreciated, a period where someone will tap you on the shoulder and say you have done well.
“Today happens to be the day for these young lads. You will get so many awards and laurels with the way you are going and with your antecedent, the sky is the limit for both of you. From your citations, you have exhibited consciousness and selflessness in service.
“Nobody will hear about you if you choose to carry out your normal duties, but you must do extraordinary things to be treated extraordinary. The Governing Board finds you worthy for this honour, and I have no doubt in my mind that you deserves this award after listening to your citations.
“You are indeed outstanding. When I listened to the citation of Ilori Ayotola Deborah, I was really proud of a young beautiful lady who is selfless and committed to duty. The administration will therefore continue to appreciate those who have worked harder to promote the unity of this country. The period of youth service, ushers you into a completely new environment, new culture, new faces to cohabit with and understand and learn from each other.
“Once again, we appreciate you for your outstanding performance and to inform you that there is always a space for you in the FCT Administration. We are waiting for your response because you must make FCT proud and I will be the happiest person to see you among those that will be receiving the presidential award. The two corps members, if interested should be engaged in the services of FCT Administration and I believe that it will encourage other corps members to stand-out”. 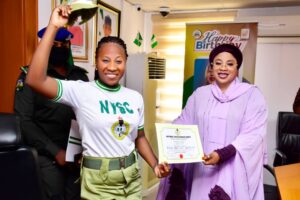 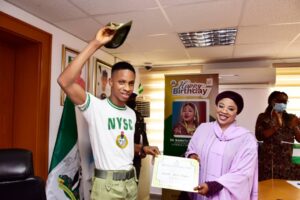 While corps member, Ilozumba Patrick Chiagozie, who hails from Anambra state graduated from Nnamdi Azikwe University, Awka where he obtained a degree in Fine and Applied Art and passed out with a Second Class Upper. He was deployed to the Federal Capital Territory for his youth service and posted to Federal Inland Revenue Service for his primary assignment. He served as a Federal Engagement and Enlightenment Tax Team Officer.

EDO 2020: I’m Supporting Ize-Iyamu for the Betterment of Edo State – Captain Hosa Okunbo
Previous Post
HOW TO GET PAID MORE THAN YOUR BOSS: 7 Strategic Steps to Secure That Dream Job By Teju Chosen