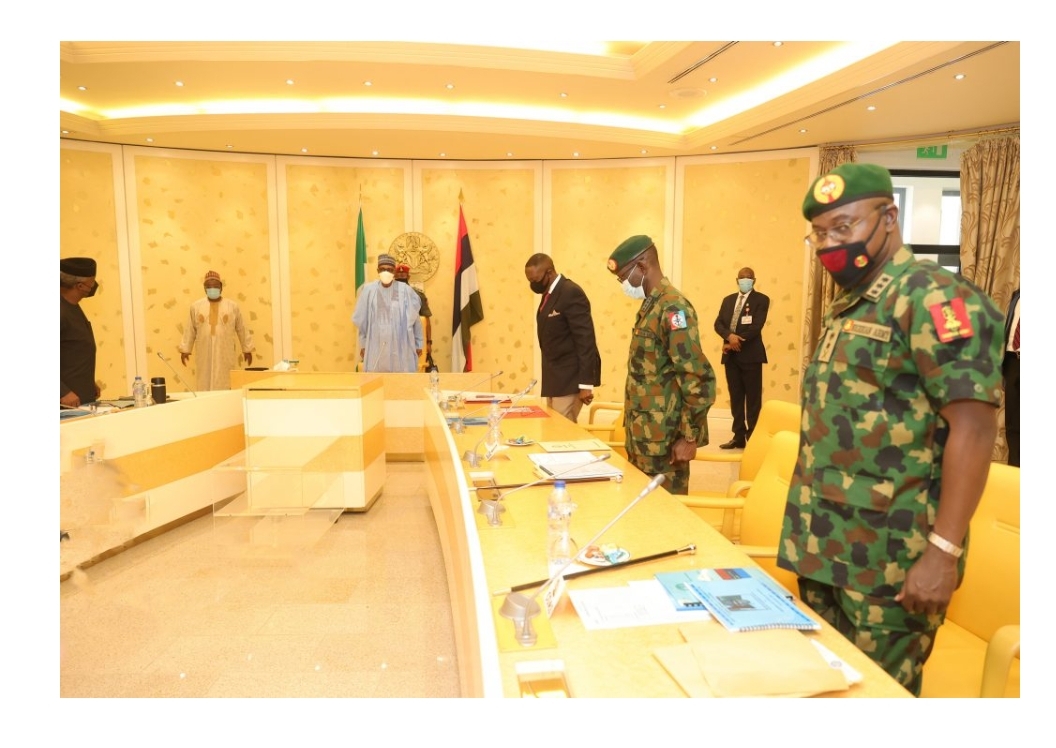 SECURITY: We Are In A Difficult Situation, FG Admits.

The Nigeria Federal Government on Thursday admitted that the country is actually in a difficult situation that needs everyone to cooperate with the armed forces of Nigeria for a long lasting solution to the security challenges facing the country.

Speaking to State House Correspondents after the Third Security Council meeting within a month chaired by President Buhari, National Security Adviser Brig. Gen. Babagana Monguno said council consider it necessary to inform the general public, that fighting this type of asymmetric conflict is a collective effort and not something that should be confined to only the security, intelligence and law enforcement agencies.

In his words ” We are in a very difficult situation. And Council understands, Mr. President understands people’s concerns about the growing insecurity. But I can assure you that there’s no straight cut and dried method of dealing with this thing unless all of us embrace each other.

” When we keep saying the whole of society approach, whole of government approach, to get a whole of nation approach, what it means is that everybody has to partake in this enterprise. The truth is that no country can ever overcome the difficulties of an asymmetric conflict by virtue of the fact that the enemy of the state is embedded within the population within the wider society.

“It is true that the local people are averse, they’re scared, they’re worried and there’s no confidence. That is understandable. But without their support without the cooperation in terms of giving information, it makes it very hard for the operational elements.

” I know people are weary, people are tired, people are beginning to gravitate to other places for self help. The truth is that help is rooted in everyone working for the other person.

“A few days ago, troops of the guards brigade were ambushed and decimated. Had there been a collective effort by way of just snippets of information we might have averted that incident, that is not to say that the responsibility is for those outside the security domain. It’s a collective responsibility.”

While decrying the role of the media in rumours and other negative news the NSA said ” Furthermore, council is also concerned about the nature of media reporting incidents with regards to insecurity. It is important for the media to understand that certain reports being generated by the media, either way, the manner in which they report can also aggravate this delicate situation.

” So Council is urging the media to be very careful in whatever it reports, whatever gets out to the public space, can have a debilitating effect on the population. Equally, the political elite is also urged to take into account the consequences of utterances, especially from people who have established a reputation, people who are considered leaders of thought, people who are considered to have some kind of influence in society, whatever goes out, may be harmful, not just to the government, if that is the intention, which I doubt may not be a deliberate thing, but at the end of the day, it will affect the wider society.”

Again, the members of the armed forces have also made a commitment that in the coming weeks, they have already started working on a new strategy to deal with these snippets of violence. And they’ve given their word their commitment to the President, that there will be a change in momentum, regardless of the fact that there might be certain institutional limitations which they face. But the understood the enormity of the responsibilities that they have.

” Again, Council is in the process of winding up the special investigative panel on the Kuje incident. And the idea is to come up with recommendations, hold those who are supposed to be held accountable for their deeds and to ensure that this type of thing never ever, ever happens again in this country.

” The armed forces have also made a commitment that in the coming weeks, they have already started working on a new strategy to deal with these snippets of violence. And they’ve given their word their commitment to the President, that there will be a change in momentum, regardless of the fact that there might be certain institutional limitations which they face. But they understood the enormity of the responsibilities that they have.”