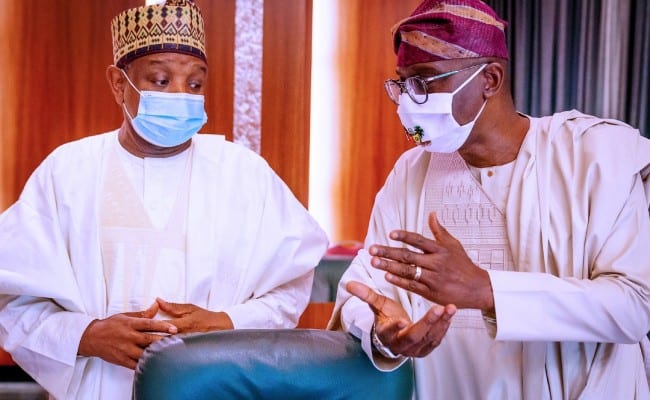 The chairman of the Progressives Governors Forum (PGF) and Kebbi State Governor, Senator Atiku Bagudu on Thursday commended his Lagos State counterpart, Mr. Babajide Sanwo-Olu, saying his achievements in the past two years are commendable and appreciable.

Governor Bagudu, who spoke virtually during the meeting, held at Lagos House, Ikeja, on Thursday, commended Governor Sanwo-Olu’s role as the Chairman of the APC National Campaign Council for the October 10, 2020 governorship election in Ondo State.

He said: “Last two weeks, the Governor of Lagos State hosted Mr. President and during that visit, what the APC story was built on was told because we saw a Governor whose records in the last two years are quite commendable and appreciable. Despite all the challenges that he had faced, he is unveiling projects that cut across infrastructure, economy and providing for security, which is one of the hallmark of APC campaign. And this couldn’t have been possible without accountability and better utilisation of government resources.

“We will communicate with them (Nigerians) on what we have been doing to continue to earn their trust, as we have been earning because the Governor of Lagos State last year led us in Ondo State to return Governor Rotimi Akeredolu to office in a hotly contested election where he performed creditably well.

“The Governor of Lagos led us and the people of Ondo State once more reinstated their acceptance of the All Progressives Congress and equally thereafter some governors – the Governor of Ebonyi and Governor of Cross Rivers joined APC, which is a testament to the fact that Nigerians believe and still appreciate APC. Despite the challenges of a smaller economy, which we have been facing, APC has been doing well at both federal and state levels to continue to earn their trust and confidence. We will certainly continue to do so.”

Mohammed called for synergy among APC information managers in all strata of the government at federal and state levels in projecting the governing party and government in good light.

“We, the information and communication managers of our party and government, must create enough synergy to enable us work together so we can achieve more. We must also ensure better funding of the information sector at all levels,” he advised.

“The mantra of APC is premised on Change, which is security, infrastructure development and economic growth. These are some of the things that have been driving initiatives in almost all of the states. We believe that economic growth and infrastructure is what will bring our people closer to one another.

“In the last one year, COVID has slowed down some of the initiatives that we started. Some of the things we have rolled out are like 12 months slowed down given what COVID has shown us. We are now coming out of it gradually. So, I believe that in terms of what APC was meant to do, is still what they are doing,” he said.

In his goodwill message, the Chairman of the APC Caretaker and Extraordinary Convention Planning Committee (CECPC) and Yobe State Governor, Mai Mala Buni, who was represented by a member of the Committee, Ismail Ahmed, advocated the need for strategic communication to push the government’s programmes and project it in good light.

“The APC is doing well but there is an avalanche of misinformation and mischief against the government. It is very difficult for the government to sell itself. This is why all APC-governed states should have a common denominator and semblance which would sell them. The states should be able to counter wrong narratives against each other and the Federal Government,” he said.