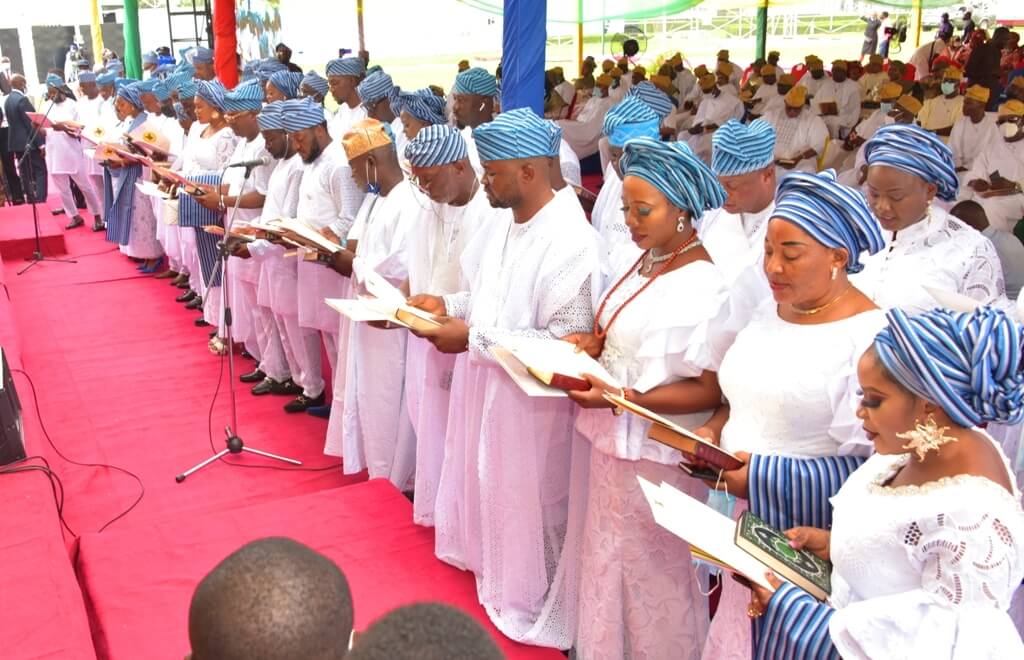 Governor Lagos State, Governor Babajide Sanwo-Olu, has said the administrative and financial autonomy being enjoyed by Local Government Areas (LGAs) and Local Council Development Areas (LCDAs) in the State for almost two decades is not granted for nothing, but given to achieve a bottom-up growth model for the acceleration of coordinated development across the State.

The Governor said local councils, as the closest tier of Government to the people, must justify their autonomy by initiating people-oriented policies and programmes, which must focus on improving the lives and livelihood of citizens at the grassroots.

Sanwo-Olu gave the advice, on Tuesday, at the swearing-in of LGAs and LCDAs chairmen elected in the State’s council elections conducted last Saturday. The chairmen and their vice chairmen took the oath at a ceremony held in the State House, Alausa.

The ruling All Progressives Congress (APC) swept all the chairmanship seats across the 57 local councils.
The party’s overwhelming victory at the polls, Sanwo-Olu pointed out, yet again demonstrated Lagosians’ faith in APC, urging the council chairmen to uphold the people’s confidence and reciprocate the trust by prioritising the welfare of their citizens in decision making.
Since the inception of the fourth republic, he said Lagos had not created any vacuum in local government administration.

The Governor advised the chairmen not to take position as an opportunity to eliminate their political opponents, but use their energy to work for the people.

He said: “Today, we are witnessing the dawn of a new era in Local Government administration in Lagos State. A resounding statement has been made, once again, that Lagos is APC, and that the people of Lagos continue to regard our party as the most viable and most credible political choice for the most populous State and biggest subnational economy in the country. We consider this overwhelming support as a vote of confidence in our administration and our great party, and it will never be taken for granted.

“I congratulate the newly elected chairmen and vice chairmen across all the LGAs and LCDAs. Your victory is an affirmation of trust in your competence, capacity and capability to discharge the responsibility of the Office you are stepping into. Being the closest tier of Government to the people, any gap or shortcoming in administration will be keenly felt by the people. As a result, your policies and programmes must be people-oriented, focusing on how to improve the lives and livelihood of the people at the grassroots.”

Sanwo-Olu reminded the council helmsmen that they came at a challenging time when the Coronavirus (COVID-19) pandemic had disrupted jobs, livelihoods and businesses across the State, noting that residents expected nothing short of good governance and policies that would enable their administrative areas navigate the difficult times and stand on a solid socio-economic footing.

This, he said, is part of their responsibilities and burdens as elected leaders, charging them to live up to their expectations. He reminded them that their tenure as council administrators was time-bound, urging them to build their legacies from the first day on office.

“More than ever before, councils require cooperation among all levels and arms of Government. It is expected that you will work in unity with other tiers of Government to bring dividend of democracy to the people in all the relevant areas, such as construction and maintenance of inner roads, waste management, primary education, healthcare, security, and so on,” Sanwo-Olu said.

The Governor extolled the leadership virtues of the National Leader of APC, Asiwaju Bola Ahmed Tinubu, expressing gratitude to former Lagos Governor for his “unflinching dedication” to the party’s continued victory at all levels.

Sanwo-Olu also praised members of the APC Local Government Election Committee, led by the Deputy Governor, Dr. Obafemi Hamzat, and the party executive members, led by State Chairman, Hon. Tunde Balogun, for delivering on the mandate entrusted to them.

Commending the Lagos State Independent Electoral Commission (LASIEC), led by Justice Ayotunde Philips (Rtd), the Governor said the umpire had continued to live up to its responsibility and duties as enshrined in the law establishing it.

He said: “My commendation also goes to all our people, the civic-minded people of Lagos State, who conducted themselves peacefully and responsibly, before, during and after the elections. I want to particularly thank you all for keeping faith with our great party.”

Commissioner for Local
Government and Community Affairs, Dr. Wale Ahmed, said the robust support received by the chairmen showed systemic dynamism and entrenched political understanding in APC, stressing that the party always emerged stronger and more united after every contest in the State.

“It is important to remember that politicians derive their popularity and grassroots support from performance and constant delivery of dividends of democracy. The task ahead of you, as council chairmen, is to sustain and even surpass the tempo of performance of previous administrations in your respective areas, the Commissioner said.

Executive Chairman of Igbogbo-Baiyeku LCDA, Hon. Sesan Daini, who moved the vote of acceptance on behalf of the council chairmen, pledged total loyalty to the party’s manifesto and development blueprint of the Sanwo-Olu administration.

LAGOS ISSUES 3-DAY REMOVAL NOTICE TO OWNERS OF ILLEGAL STRUCTURES IN LEKKI
Previous Post
JAMB WITHHOLDS RESULTS OF 93 CANDIDATES, RELEASES 14,620 RESULTS UNDER INVESTIGATION
Next Post
You May Also Like