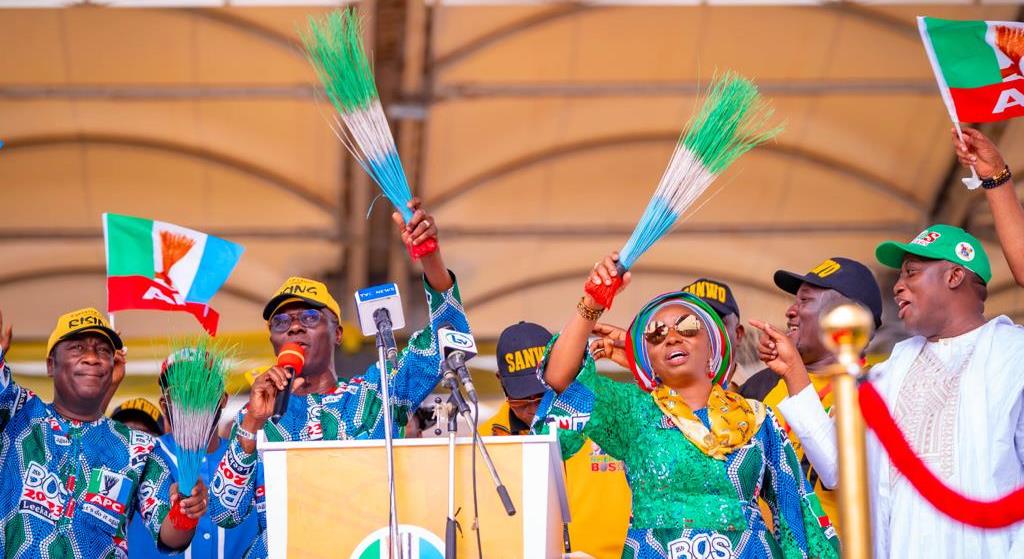 A mammoth crowd of Lagos State residents, on Saturday, converged on Onikan – a cultured neighborhood in the heart of Lagos Island – for an All-Progressives Congress (APC) rally.

Clad in branded yellow shirts and Ankara brocade, the crowd dominated the city Centre with pockets of political carnival. Thousands of ordinary citizens and party stalwarts trooped to Mobolaji Johnson Pavilion, the venue of the inaugural rally flagging off the party’s governorship campaign in Lagos.

The 10,000-capacity stadium brimmed with APC supporters. They carried banners and chanted slogans to receive the party chieftains and members of the Governorship Campaign Council.

Reacting to the massive turnout, Sanwo-Olu said the vast attendance further confirmed the strength of APC as the only party of choice in Lagos.

The Governor mounted the rostrum to seek the mandate of Lagosians for another term in office, saying the “Greater Lagos” he promised at the inception of his government could now be visualized, given the achievements recorded during his first term.

Sanwo-Olu said the last three and half years had been challenging for his administration, pointing out that his government traversed difficult terrains to deliver on its development objectives.

He said: “It has been an interesting and challenging journey for us in the last three and half years. Our administration has traversed difficult terrains and witnessed major disruption occasioned by global pandemic. Lagos had its fair share in the attendant socio-economic meltdown, but we provided strong leadership that protected the people and made the State come out better and stronger.

“Now, we can say ‘Greater Lagos Rising’ because our State is rising on all of our modest achievements through the THEMES agenda. In Transportation and Traffic Management, Lagosians are now living with the reality of the delivery of two intracity Rail Mass Transit projects that are on the verge of completion. These projects will be handed over in the coming weeks.

“We have also scaled up infrastructure in public transportation services by improving BRT services, injecting new taxi scheme and energizing traffic management agency for efficiency. People have seen the construction and commission of Lekki Deep Seaport, and massive road construction projects in the Eti Osa and Epe corridors.

We have delivered and are still constructing more new roads in Ikorodu, Victoria Island, Ikoyi, Alimosho, Ajeromi-Ifelodun, Somolu and other areas.”

Sanwo-Olu said activities of his administration, since inception, had been about purposeful governance. He added that his government had delivered new hospitals in Badagry, Epe, and Eti-Osa, pointing out that construction of new hospitals were currently being undertaken in Ikorodu, Ojo and Lagos Island.

In the environment, the Governor said the State was currently constructing 210 new drainage channels to address the issue of flooding in vulnerable communities. He said his Government had also raised the level of infrastructure in emergency response agencies, mentioning the recently completed four fire stations, recruitment of new fire fighters and provision of firefighting equipment.

The Governor said: “Lagosians can testify to our feats in education. Over 1,000 new classrooms have been added to public schools and we completed over 1,097 projects in schools. We trained our teachers in modern teaching techniques through Eko EXCEL and handed over tablets to them for teaching. Overall performance of Lagos students in WAEC has improved from 42 per cent to over 83 per cent.”

Sanwo-Olu said there had been laudable progress recorded across his Government’s development blueprint, noting that the State had become a model for good governance and development.

The Governor thanked residents for standing by his administration, pledging that he would not take their support for granted.

He urged party members to take back the Government’s achievements back to their communities and engage in door-to-door campaign to ensure APC candidates are elected in the general elections.

Director General of Lagos APC Campaign Council, Sen. Ganiyu Solomon, said the party would have no problem taking its campaign to the electorate, given the “exceptional” performance of the party’s governorship candidate.

Solomon said the second coming of Sanwo-Olu and Hamzat would bring the State to new heights of development and prosperity.

Leader of the Governance Advisory Council (GAC), Prince Tajudeen Olusi, said: “The combination of Sanwo-Olu and Hamzat are the best a democratic society can get in delivering results of good governance. Anyone who wants the development of Lagos to continue, Sanwo-Olu must be allowed to continue the good work he started.”