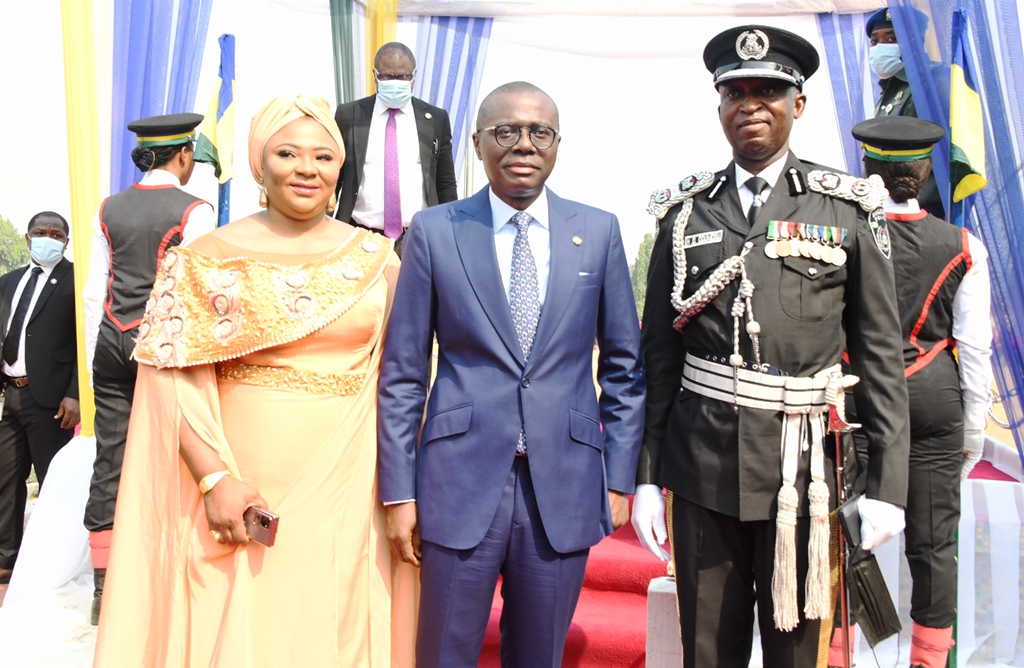 • ‘Eliminating bank robbery part of my legacy in Lagos’ – Odumosu

The immediate past Commissioner of Police in Lagos State, Assistant Inspector General (AIG) Hakeem Odumosu, on Tuesday, inspected the final parade as a cop, taking a bow out of the Police Force.

Governor Babajide Sanwo-Olu, in his note of commendation, said Odumosu served Lagos and the country with every mental and physical strength he is endowed with, saying it was time for the star crime buster to drop off the uniform for a post-service life.

Odumosu’s retirement from the Force followed his recent attainment of the rank of AIG, after which the statutory retirement age set in. He was enlisted in the police on March 3, 1990 and served for 32 years.

The AIG took a bow at the Pull-out Parade and Valedictory Ceremony organised in his honour by the Lagos State Government at the Police Training Ground in Ikeja.

The event was attended by members of the State Executive Council, representative of the Inspector General of Police (IGP), former IGP, Alhaji Musiliu Smith (rtd), Oba of Lagos, Alayeluwa Rilwan Akiolu, wife of the Minister of Works and Housing, Dame Abimbola Fashola, Commissioners of Police from Southwest states, Committee of Wives of Lagos State Officials and family members of the retiring officer.

Odumosu, an astute law enforcement officer nicknamed “Tango One” for his exceptional skill in flushing out criminals, served as first chairman of Lagos State Environmental and Special Offences Enforcement Unit (Taskforce) and also the Commander of the State-funded Rapid Response Squad (RRS).

Sanwo-Olu described Odumosu as “nemesis” of criminally-minded elements, noting that the ex-Lagos Commissioner of Police had a deep knowledge of the nooks and crannies of the State.

The Governor thanked the outgoing AIG for his service to Lagos during which the State recorded receding crime rate. The Governor said Odumosu attended to his constitutional duties with vigour, courage and without giving excuses, adding that he led officers serving in the State’s Police Command from the front throughout his tenure as Commissioner.

The Governor said: “Hakeem Odumosu’s appointment in November 2019 as Commissioner of Police in Lagos came with much expectation, as it was believed that his arrival would bring the long-sought succour which many Lagosians yearned given the security challenges facing the State then. These expectations came as a result of his very deep knowledge and understanding of what security architecture of Lagos should be.

“Tango One, as we all call him, came with wealth of experience, and new approaches to pursue effective policing. Those approaches led to an improvement in security of lives and property in Lagos. He came, he saw and he is bequeathing a well-informed and motivated police command to officers serving in Lagos. He discharged his duties with diligence and emerged as outstanding police officer. I am happy to be at this occasion, which is a deserving farewell to AIG Hakeem Odumosu out of the Nigeria Police Force.”

Sanwo-Olu said Odumosu led the police in Lagos at challenging periods, pointing out that his stewardship brought back discipline and deepened character across hierarchies in the Command, especially the rank and file.

The Governor said Odumosu was leaving a big shoe in the Command, given his meritorious accomplishment as crime buster. He charged the new Commissioner of Police, Abiodun Alabi, to take up the gauntlet and build on the structure laid by his predecessor.

“It would be a disservice to AIG Odumosu if the level of policing in Lagos goes down after this moment. The least we can do is to ensure the labour of Odumosu is not in vain. I charge the new Commissioner of Police and all officers serving in Lagos Command to show renewed commitment to fight crimes and ensure security of lives is raised to the level where the State would be the envy of others in the country,” Sanwo-Olu said.

Deputy Inspector General (DIG) in charge of Southwest operations, Johnson Kokumo, who represented the IGP Usman Alkali Baba, said Odumosu, throughout his years of service, did not fit into the description of “mercantile police officer” – term used to portray unethical officers, stressing that the AIG was leaving a legacy of diligence, hard work and strictness in the Force.

Smith, who is chairman of Police Service Commission, said it was time for Odumosu to take a rest after an accomplishing career in the police and settle down as a family man.

In his valedictory speech, Odumosu, accompanied by his wife, Alhaja Nafisat, said he was not leaving the Force out of tiredness, but quitting to experience civil life, having attained mandatory retirement age.

He noted that his decision to join the police was not out of joblessness but his desire to serve his fatherland after his first degree in Arts at Ahmadu Bello University (ABU) in Zaria, Kaduna State.

Odumosu, who also holds a Law degree, two Master’s degrees and Diploma certificates, advised young officers to embrace discipline, which he described as the “bedrock of the Force”.

He said: “I want to make it known that, despite challenges I faced in the course of my career, I have no regret joining the Force. The police properly groomed me to become a professional law enforcement officer that can stand tall among his peers anywhere in the world.

“As Lagos RRS Commander, the job toughened me to frontally confront daredevil armed criminals whose passion was robbing banks. Since then, bank robbery incidents in Lagos nosedived. Today, I am proud to say that there was no single bank robbery throughout my tenure as Commissioner of Police in Lagos.

“It is time for me to quit the state and continue my journey into civil life. I have played my role and delivered my line. I am retiring today, but I am not tired. Nigeria Police Force will continue to be my constituency.”

Odumosu thanked the All Progressives Congress leader, Asiwaju Bola Ahmed Tinubu, Governor Sanwo-Olu and Minister of Works and Housing, Mr. Babatunde Fashola for being pillars of support throughout his service years in Lagos.