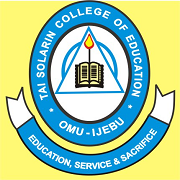 The Ogun State Governor, Prince Dapo Abiodun has been asked by the Concerned Academic Staff Union of the Tai Solarin College of Education (TASCE), Omu-Ijebu, to immediately relieve the Provost of the institution, Dr. Lukman Adeola Kiadese of his duties.

The embattled Provost had always escaped from the wrath of the Union in the past, however, this time the Union finally passed a vote of no confidence on him and said his removal would be the major solution to the crisis currently bedeviling the institution.

The Union, headed by Mr. Ade Balogun said the Union could no longer entrust the institution to him since he has proven his inability to manage the institution, noting that no meaningful contribution to the institution since his inception of office as the Provost of the College.

“His removal will usher in a new regime that will see to the plight of the lecturers and urgent standardization of the institution, it will also see to the removal of all those he recruited through the back door”, the Union said

He alleged that Lecturers in the institution were always scared to tell him the truth for fear of being victimized, noting that his mode of frustrating those he does not like, including forcing them to resign on trumped up changes.

He added that he held down their promotion and never supported the idea of financially encouraging those who wished to go for their doctorate despite the fact that he put an embargo on promotion pending when the Lecturers received their PhD.

He also implored the Governing Council to ask the Provost to drop all trump up charges against the five staff of TASCE, demanding for withdrawal of their letters of suspension and direct TASCE management to stop all forms of vindictive acts, witch-hunting, arrest, intimidations, harrasment, assaults, victimizations of TASCE staff Unions leaders.

“We are begging the institution management to remit our pension fund deductions and Cooperatives, also setting modalities in place on how other burning issues that can be resolved without further delay”, they said

Balogun further urged the government to recall seven TASCE staff whose appointment were terminated in June 2020 on the ground that they work in the institution as NCE holders, noting that implementation of the institution staff promotion exercise from 2015 till date was also imperative and germane to them.

“We say ‘No’ to Dr. Lukman Adeola Kiadese’s illegal second term bid, the Governing Council must follow the procedures as entrenched in TASCE Enabling Law of 2008 for the appointment of new Provost.

He now implored the Provost to reverse all politically motivated dismissal, removal, demotion, redeployment and transfers of staff of the institution illegally.