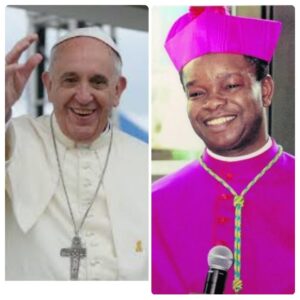 Pope Francis has appointed a Nigerian Priest of the Catholic Diocese of Abia Abia State And Apostolic Nuncio to the Antilles, Archbishop Fortunatus Nwachukwu as the Permanent Observer of the Holy See, that is the vatican to the United Nations Office and Specialized Institutions in Geneva.

Pope Francis Also appointed Archbishop Nwachukwu as permanent Observer to the World Trade Organization, WTO and the Representative of the Vatican to the International Migrations
Organization(1OM).

The appointment is contained in a press release by the Office of the Antilles Episcopal Conference Secretariat, Port of Spain, Trinidad and Tobbago on friday December 17, 2021, where Archbishop Nwachukwu is currently serving as Apostolic Nuncio.

Until his appointment, Archbishop Nwachukwu was transferred from Nicaragua to the current Mission in Trinidad and Tobago on 4 November 2017, and assume office on 19 March 2018.

Accirding to the new appointment, Archbishop Nwachukwu will still remain in charge of the Mission in Trinidad and Tobago, the Caribbean and
Antilles, until he departs for the new mission at the United Nations at the beginning of March 2022.

In January 1972, he was admitted into Immaculate Conception Semary, Ahiaeke Umuahia, at the age of 11. Three years later, in 1975, he and some of his classmates were allowed to sit the last London GCE, before the West African Examination Council (WAEC) took over the organization of the secondary school final examinations. His result was excellent.

He then taught Mathematics and Latin in the same seminary until 1977, when he was sent to continue his priestly formation at the newly opened Philosophy Faculty of the Bigard Memorial Seminary at Ikot Ekpene.

After his priestly ordination, Fr. Fortunatus worked as teacher and later as vice-rector of the Immaculate Conception Seminary, Umuahia, as well as parochial vicar and administrator of the St Anne’s Parish, Ibeku (1984-1986). Concurrently, he served as the Diocesan vocations’ director, as well as the chaplain of the Federal College of Agriculture and the Umuahia Campus of Alvan Ikoku College of Education, both in Umudike-Umuahia.

In 1986, he was sent to Rome for specialization studies. He studied Scriptures at the Pontifical Biblical Institute in Rome, the Hebrew University in Jerusalem and the Philosophisch-Theologische Hochschule, Sankt Georgen, in Frankfurt, Germany. He also studied Dogmatic Theology at the Pontifical Urbaniana University, as well as Canon Law at the St Thomas Aquinas University, Angelicum, both in Rome. At the Biblical Institute, he obtained a Licentiate degree in Sacred Scriptures and successfully completed the lectio for the doctorate degree, before transferring to Sankt Georgen, Frankfurt, for specialization in the textual criticism of the Old Testament under Prof. Norbert Lohfink, s.i.

In 1992, Fr Fortunatus was called to the Pontifical Ecclesiastical (Diplomatic) Academy. After two years of formation in pontifical diplomacy and international relations, he joined the diplomatic service of the Holy See in July 1994. He then served in the Apostolic Nunciatures in Ghana, Togo and Benin (1994-1996), Paraguay (1996-1999), Algeria and Tunisia (1999-2002), and the Permanent Mission of the Holy See to the United Nations and International Organizations at Geneva (2002-2006). In 2006, he was called to the Vatican to take charge of the Human Rights Desk in the Second Section of the Secretariat of State.

On 4 September 2007, he was named Chief of Protocol of the Secretariat of State and, five years later, on 12 November 2012 he was appointed Titular Archbishop of Aquaviva and Apostolic Nuncio to Nicaragua.

He received the Episcopal ordination on 6 January 2013 from the hands of Pope Benedict XIV, and so became one of the last four archbishops ordained by the Pope emeritus before he retired from office. His episcopal motto is “Solvere Calceamenta” (Take of your shoes). Archbishop Fortunatus Nwachukwu took office in Managua, Nicaragua, on 18 February 2013. On 4 November 2018, Pope Francis named him Apostolic Nuncio to Trinidad and Tobago, Antigua and Barbuda, Bahamas, Barbados, Belize, Dominica, Grenada, Guyana, Jamaica, St. Kitts and Nevis, St. Lucia, St. Vincent and the Grenadines, Suriname and CARICOM, and Apostolic Delegate to the Antilles.
Archbishop Nwachukwu has been honoured by various Governments with the national decorations.

In the United States of America he has been honoured as Honorary Citizen respectively by the State of Nebraska and the City of Lincoln (2008). The President of Italy named him “Official” of the Order of Merit of the Italian Republic (2007), that of Chile decorated him as Gran Oficial of the Order of Bernado O’Higgins (2009); the Head of State Argentina awarded him the high honour of Gran Cruz of the Orden de Mayo (2011), that of the Dominican Republic awarded him the special decoration of Grand Oficial of the Heraldic Order of Christopher Columbus (2012) and, more recently, the President of Nicaragua awarded him the high decoration of Grand Cruz of the Order of José de Marcoleta (2018).

In Nigeria, in 2012 the Eziaba Agbani Community of Enugu State decorated him with the title of “Chief Nwanne Di Na Mba 1 of Eziaba Agbani” in recognition of the immense help he rendered to a son of that community while in Europe.

It should be mentioned that Archbishop Nwachukwu has always worked for good relations between persons of different origins and has been a fervent fighter against ethnocentric and similar prejudices and discriminations. In this regard, he created in 2013 the Fortune Aquaviva Foundation, with the aim of keeping on the table discussions around the theme of social friendship and the dangers of ethnic and racial prejudices and discrimination. A year later, to pursue further the goals of the Aquaviva Foundation and prodded on by the former Bishop of Aba, Most Rev. Dr. Vincent Valentine Ezeonyia, C.S.Sp., of blessed memory, he founded the Pious Association of Marian Missionaries Ad Regnum Dei. The charism of the Association is mainly to fight ethnic and related prejudices and discriminations in the Church and society, as well as assisting the victims of such ills.

Archbishop Nwachukwu speaks and understands several languages, beyond his mother tongue, Igbo, including English, Italian, German, French, Spanish, modern Hebrew and a bit of Arabic, as well as some ancient languages of Biblical research namely, Latin, Hebrew, Greek and Aramaic.

DELTA 2023: The State I’ll Run If Elected — Frontline Aspirant, Fmr Minister
Previous Post
One man to pay 30 percent of Nigeria’s budget and more 60 of other nations as tax