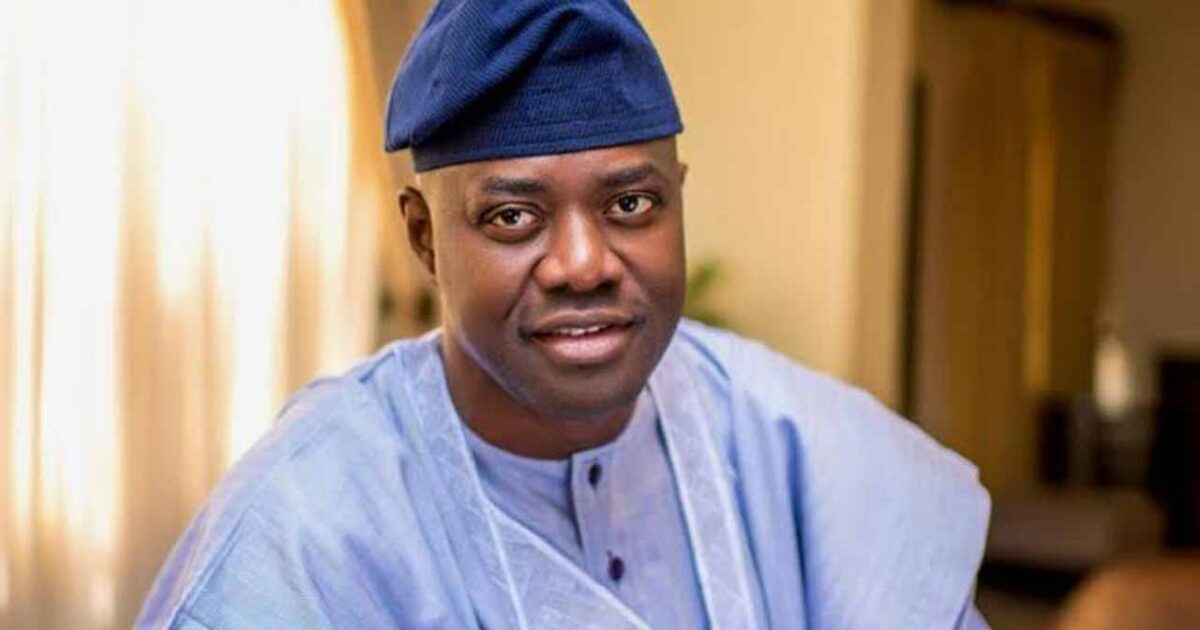 *To meet ALGON on infrastructure devt at the grassroots

Oyo State Governor, ‘Seyi Makinde, on Monday, swore-in 10 commissioners and the President of the Customary Court of Appeal, Justice Moshood Abass, charging them to hit the ground running and to remain on the path of engendering justice and sustainable development in the state.
The governor, while speaking at the twin swearing-in ceremonies held at the Executive Council Chamber of the Governor’s Office, Secretariat, Agodi, Ibadan, urged the commissioners to play their parts in the realisation of his vision for the good people of the state.
He equally tasked them to synergise efforts for the continued growth and an integrated approach to governance, with a view to attaining economic prosperity in the state.
A statement by the Chief Press Secretary to the governor, Mr Taiwo Adisa, indicated that the governor promised to facilitate a marked improvement in infrastructure across the 33 local governments of the state, noting that the state government will soon engage local government chairmen on how to make that possible.
Makinde said: “We are here today for the swearing-in ceremony of the remaining 10 commissioners that will complete the Oyo State Executive Council (ExCo).
“For those of you who are returning commissioners, we are happy to have you back as part of the Exco. “We believe you are determined to put in even more effort as we continue to engineer a new Oyo State and move our people to prosperity.
“We have also brought in some new faces that we know will play important roles in the realisation of our vision for the good people of Oyo State.
“I am sure that if you pay attention, you will see that the things that our people are asking for are not things that are beyond us. Our people yearn for growth and development. They want good roads and quality infrastructure, even as they are asking for employment opportunities and economic prosperity.”
The newly sworn-in commissioners are: Mr. Seun Fakorede (Ministry of Youth and Sports), Mr. Adeniyi Adebisi (Ministry of Agriculture), Mr. Olasunkanmi Olaleye (Ministry of Trade, Investment and Commerce), Dr. Wasiu Olatunbosun (Ministry of Information, Culture and Tourism), Mr. Abdulrahman Abdulraheem (Ministry of Education, Science and Technology).
Others are: Mr. Abiodun Oni (Ministry of Environment and Natural Resources), Professor Misbau Babatunde (Ministry of Budget and Planning), Mr. Segun Olayiwola (Ministry of Lands and Housing), Dr. Bode Ladipo (Ministry of Health) and Alhaja Kafilat Omolabake Olayiwola (Ministry of Women Affairs).
Speaking further, Governor Makinde used the occasion to assure residents of the state that there will be significant improvements in infrastructural facilities across the state, saying that the government has been pushing investments to the local governments because it knows the importance of grassroots development.
He added that the administration’s integrated approach to governance has begun to yield positive results and is already bringing developments.
He stated that the implementation of the World Bank-backed Rural Access and Agricultural Marketing Project (RAAMP) will ensure that the rehabilitation of rural roads will soon kick off.
He said: “We know the importance of development at the grassroots; this is why we keep pushing for investments to go to local government areas. Just last week, we were in France and the Commissioner for Local Government and Chieftaincy Matters, Chief Bayo Lawal, was there, having meetings with investors willing to come and collaborate with us.
“After our youths receive training on technology-driven food systems under the Youth Entrepreneurship in Agribusiness Project (YEAP), they will need to practice and some of them will need jobs. “Some of them will need to come together to form alliances.
“For example, we have been receiving several reports of people complaining about roads. Some have even gone as far as saying that the state government is starving the local government authorities of funds.
“Local government funds from FAAC go directly into the Joint Allocation Accounts Committee (JAAC) account. But after they have drawn first-line charges such as salaries for primary school teachers and local government workers and expenses for primary healthcare centres, what is left is meagre. Also, local government authorities are in charge of all the funds from their internally generated revenue.
“When we came in as an administration, we had 11 local government councils with a backlog of salaries and we had to pay the backlogs. And we don’t want to walk that route again.
“Everybody seems to be looking at the money we have saved so far.
“When we came in, we started building the local government, especially those periods when we were using HLAs to run the local council areas, we were saving an average of 1billion Naira every month. Yes, we have built it up to about 12 -14billion Naira but they cannot share it.
“We will use it as a stabilisation fund for them, not for us. The state is not interested in spending their money or telling them how to spend their money but the state will not also sit by and let workers in those local government areas be denied their salaries at the end of the month.
“So, we will engage with the leadership of ALGON and I believe the people of Oyo State will see a marked improvement in infrastructure, especially the road,” the governor concluded.
Signed
Taiwo Adisa
Chief Press Secretary to Governor Seyi Makinde