Ever since losing the July 16 governorship election in Osun state, the erstwhile ruling party in the state had descended into what many observed as a tough relationship with the truth, building hope of returning to power on pure falsehood. At the centre of it all are men of yesterday still swimming in the ocean of lies, propaganda and fake news.

Those who have followed the Osun governorship Tribunal closely will observe a pattern of deliberate misinformation and far-fetched conspiracies as part of efforts to manipulate thoughts and confuse the public on the matter. The regime of fake news failed Mr Oyetola yesterday and it will forever consign him in the dustbin of histroy. 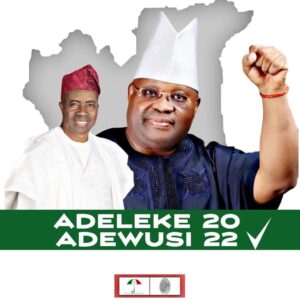 In his latest article titled ‘Osun Tribunal and PDP’s Panicky Response To Reality’, Ismail Omipidan, one of those men of yesterday tried so hard to distort the facts of the case, especially when he pushed so hard, however, unsuccessfully, in presenting Governor Ademola Adeleke as not qualified for the seat. This is all part of a long-established pattern to mislead the public, and in this case, the judiciary. It was a rehearsal of the 2018 campaign of lies against Governor Adeleke, all of which failed to stick.

It is first a sign of defeat to rely on 2018 matters for a 2022 case. Abandoning the current space for a matter of more than four years confirm that the petitioner is holding unto a straw. Let us affirm here that all the fillings of Governor Adeleke meet the requirements of the law and he is more than qualified to contest the last and previous elections.

For a start, the question of Governor Adeleke’s eligibility has been answered by several courts. In fact, the West Africa Examination Council (WAEC) had testified before one of the courts that Adeleke sat for the 1981 exam conducted by it. This was supported by an affidavit deposed by Mr. Osindeinde Henry Sunday Adewumi, the Deputy Registrar/Head of School Examination on 11th of September, 2018, while responding to a subpoena from a Bwari High Court in Abuja.

In paragraph (3i) of the affidavit, the WAEC specifically noted that “The said Candidate named in the suit known as Ademola Adeleke with Centre Number 19645 and Candidate Number 149 indeed sat for the Senior Secondary School Certificate Examination in May/June 1981 conducted by the Council at Ede Muslim High School situate at P.O. Box 6 Yidi Road, Ede, State of Osun.”

Similarly, the Principal of Ede Muslim High School, Mr. Khalid Adejare Abass deposed to an affidavit at the High Court of Justice, Federal Capital Territory Abuja, that the TESTIMONIAL and STATEMENT of RESULT tendered and submitted to INEC by SENATOR ADEMOLA ADELEKE were issued by the authority of Ede Muslim High School-1, Ede. He went a step further in paragraphs 3, 4, and 5 “I know as a fact that the Candidate named in this suit known as Ademola Adeleke with centre 19645 and candidate number 149 indeed sat for the West Africa School Certificate Examination (WASC) in MAY/JUNE 1981 conducted by West African Examination Council, That copy of Result Listing (Ledger) containing the result of all the Candidates (001-221) who sat for the Secondary School Certificate Examination at Ede Muslim Grammar School, That the register of admission, which included progress and withdrawal of Ede Muslim Grammar School, PO Box 6, Yidi Road, Ede, Osun State within 1976-1981.”

All of these go to dispute the suggestion that Governor Adeleke forged the credentials he filed with the INEC in 2018 as being advanced by the APC given that the concerned authorities have affirmed the authenticity of the documents. It is a settled law that only the maker of a document can prove that a document is valid or otherwise, not people who are neither staff nor have any relationship with the maker of the document in question.

This is not so different from Omipidan’s narrative on over-voting. In his article, he tried to create the impression that the witnesses called by his party could substantiate the baseless claims of over-voting but that was not the true picture of what transpired in the courtroom. Just as I had raised before now, Omipidan and the APC appeared more interested in a media trial than actually proving their exaggerated claims before the panel.

None of the two witnesses called by the petitioner so far have been able to corroborate any of the claims raised in the petition before the Tribunal. It is from one inconsistency to the other to the point of the witnesses entertaining people in the court with their untenable positions.

For instance, the star witness of the petitioner, Isiaka Olanrewaju admitted to making an error in his sworn affidavit to the Tribunal as he had claimed to work for the 2nd respondent. He also conceded to the fact that the BVAS report, which the petitioner is relying on for its case, is a secondary source of evidence, and by inference, can not be superior to the data on the BVAS machines, being the primary source of evidence of accreditation data for the election.

And more, the petitioner star witness admitted to failing to compare form EC8A with the ticking of voter’s register in the contested polling units just as he told the panel that he did not use form ECG40(1,3) and ECG40 in his analysis, raising serious questions on the integrity of the data he relied on because the forms in question contain vital data on the election. And to make matter worse, the so-called star witness has 762 polling units in his table of claim of over-voting but the units raised by the petitioner in the petition was 749. It was a mess and no judicial process will allow such inconsistency to stand.

The experience was no different with Rasak Adeosun, who though, was called as a witness by the petition to corroborate the claim of forgery against Governor Adeleke, relied on his opinion, rather than presenting the facts before the panel. Adeosun admitted that he was neither staff nor a representative of any of the schools that issued the academic documents filed by Governor Adeleke with the INEC for the 2022 governorship election and one wonders how he was able to come to the conclusion that the documents were forged.

Omipidan and the APC should come out of the illusion that it will twist the fact of the matter, and manipulate the judiciary to foist itself on Osun people like it did in 2018. Osun people will not watch the mandate they wilfully gave to Governor Adeleke be stolen again, and so, the mandate usurper should stay away.

As the Tribunal commences sitting, more twisted falsehood will emerge from the desk of fake news merchants in desperate pursuance of media trial. Neither the public nor any discerning stakeholder will succumb to the rantings of little liars.

• Sarafa Ibrahim is a Member of Adeleke Media. He can be reached via email: neyoclass09@gmail.com or Twitter @SarafaNgr