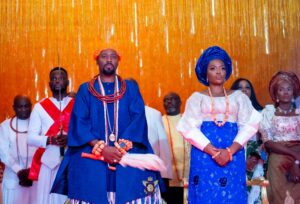 The Olu of Warri, His Majesty, Ogiame Atuwatse III, Thursday was entertained to the melodious classic songs by the Royal Iwere Choir as part of activities to his one year anniversary on the exalted throne of his forefathers.

This is the first time the Royal Iwere musical group as put together will perform before the Warri king at the Anniversary to admiration of the people. Ogiame blessed them saying “You will Perform in Lagos, You will Perform in Abuja, you will grace the continent of Africa and you will be heard in Europe, America and the rest of the world.

The monarch also urged the people of the Kingdom who have documented work or publications that reflects on the origin, culture, tradition, challenges and prospects of Itsekiri people to come up with such for proper preserved at Royal Iwere Society. 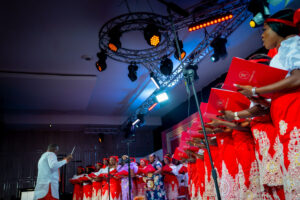 While emphasizing on the value of honour, loyalty and respect , Ogiame also indicated his interest to chair the Royal Iwere Society and noted that it will be the hub where the Itsekiri society can evolves.

The Paint Ball competition was part of the numerous programmes lined up to mark the 1st Coronation Anniversary of the king.

The game was organized among some of the chiefs in the palace.

Team Amatserunleghe defeated team Eyitemi Diden to lift the trophy in the keenly contested game played at the Palace ground of the Olu of Warri.

The king was flanked by his wife, Queen (Olori Atuwatse 111), palace chiefs and hundreds of Itsekiri sons and daughters who gathered at the palace to watch the game.

Cultural dance by the Omadino Community also added glamour to the competition.

Responding, Ogiame Atuwatse 111 said, “I am happy to see a successful competition by our royal chiefs”.
Ogiame also use the opportunity to attend the Iwere Music Concert where he unveiled Royal Iwere Society.