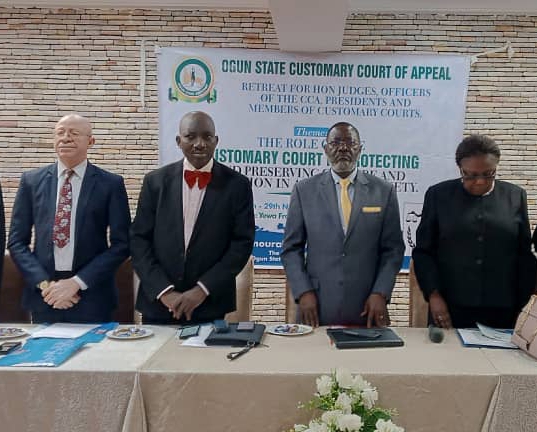 The President, Ogun State Customary Court of Appeal, Hon. Justice Mobolaji Ojo has disclosed that the essence of the customary court is to ensure that justice is available to all in the state.

Justice Ojo, who disclosed this at the opening of a three-day annual retreat for Judges, Officers of the CCA, Presidents and members of Customary Courts, with the theme “The role of the Customary Court in Protecting and Preserving Culture and Tradition in a Modern Society”, held at Yewa Frontier Hotel, Ilaro, Ogun State.

He said that it was imperative that more courts are established and effectively administered to make justice accessible across all social strata for any given society.

He added that Customary courts generally have unlimited jurisdiction to determine questions of customary laws, which has conduit that its not limited to settlement of disputes alone, but right to recognize and establish, customary law principles that were restated, declarations and made in the direction of promoting and preserving native laws and customary law practices.

Speaking further, he noted that the theme of the retreat is apt, highlighting the reforms that have taken place within the customary courts system of Ogun State with a view to enhancing administration of justice across the the metropolis and touching the lives of the common man as it was.

According to him, “The administration of justice is indeed a broad term, and within that general rubric, the state strives within its enabling laws and institutions to achieve fairness, ensuring justice and impartiality according to the rule of law. The rules applicable to the administration of justice are extensive and refer to, amongst other concepts, fair trial, and presumption of innocence, independence and impartiality of the court or tribunal, and the right to appropriate remedy”.

While noting that the main vehicle for the protection of human rights at all levels of the system of administration of justice is necessary for the peace and stability of the State, he informed the participants that an equitable and effective system of administration of justice is essential for protecting minority rights, which is also important to ensure a flourishing of an inclusive democracy.

“Indeed, the essence of this retreat is essentially to broaden the horizon of participants and thus, enhance their performance and productivity, and the quality of the justice system at the Customary Court level will have been raised appreciably”, he said

Justice Ojo reiterated that in order to promote the administration of justice in Customary Courts, it is essential that the Presidents and Members of the Courts were acquainted with the provisions of the enabling law, that is, the Ogun State Customary Court Law (as amended) hence the need for the workshop and retreat.

One of the guest lecturers/Speakers, a retired Osun State Customary Court of Appeal, President, Hon. Justice Oladejo Wasiu Akanbi, stated that the law simply means that things must be done according to and in conformity with the law, noting that there is no room for arbitrary action by government or any person in a community where the pulse of law is held sacred.

“In fact, the principles in the rule as slated by Dicey are three; first, is the absolute supremacy of the law as opposed to the exercise of arbitrary power, second, is the equality of all persons before the law, while third, is that the constitution is the result of the ordinary law of the land as interpreted by the courts”, Akanbi said

Also, Hon  Justice, Anthony Araba, in his presentation, said that Customary Courts Law of the State, 2006, section 19, to be precise (as set out in thr second schedule of the law) gave Customary Courts in the State jurisdiction to try criminal cases involving offences against public health, simple assaults, offences relating to animals.

He said the courts was set up to do substantial justice to the parties without recourse to the rigours and technicalities of the common law, saying the present Customary Courts have their origin in what was known then as “Native Courts”.

Earlier in his address, the Hon. Justice Idowu Adebiyi Odugbesan, disclosed that the retreat is the very second of its kind to be organized for the Presidents and Members of Customary Courts, noting that the retreat has proved to be very essential due to the need to ensure that the Presidents and Members of Customary Courts are well informed and trained for effective and proper discharge of their duties.