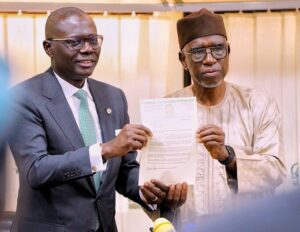 Executive Secretary of NUC, Prof. Abubakar Rasheed, made this known on Tuesday in Abuja while presenting operational licences for two new universities to Governor Babajide Sanwo-Olu of Lagos State.

The NUC boss, who said Nigeria before now could only boast of 203 universities, said the two additional ones has raised the number to 205, but still not enough when compared to the over 200 million people in the country.

He said despite the increasing number of private universities in the country as against state and federal universities, they could only account for 5.06 percent of students in the nation’s ivory towers, leaving the remaining 94percent in public universities.

“We still find it difficult when state governments approach us and said, we want new universities. What we do at NUC is to quickly check the antecedent of the state,what they do to existing institutions in their state. Most cases what we found out is very sad…., but it was a different case when Lagos approached us.

“Lagos State is the largest, the most cosmopolitan, has the largest assembly of most educated people, Lagos State has only one university in the past 39 years,” he said.

The NUC boss revealed that with the approval of the two new universities, letters would be forwarded to the Joint Admissions and Matriculation Board (JAMB), Tertiary Education Trust Fund (TETFund) and National Youth Service Corps (NYSC) for necessary action.

On his part, Governor Sanwo-Olu, who expressed delight over the coming on board of the new institutions, said the University of Education was an upgrade and merging of Adeniran Ogunsanya College of Education (AOCOED), Ijanikin and Michael Otedola College of Primary Education (MOCPED), while the Lagos State Polytechnic (LASPOTECH) was converted to the University of Science and Technology.

The governor said the new universities would provide massive opportunity for individuals seeking university education in the state.

“Record has shown every year, even with our best efforts, we still find it difficult to meet the demands of our teeming youths who are craving for higher education, who are the future leaders. who want to be a reference point not only for themselves, not only for their family but for our nation,” he said.

While assuring of the readiness of the government to support the new universities to deliver on their mandate, Sanwo-Olu said one of the new institutions already has about 60 Doctor of Philosophy (PhD) holders, adding that Nigerians should expect the best from the new institutions as they are located in centre of excellence.