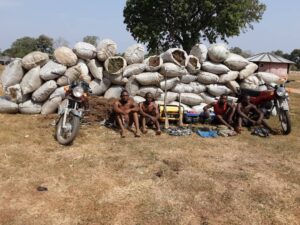 Major General John Enenche in a press statement said The gallant troops stormed the camps, engaged and overwhelmed the criminals with aggressive firepower, forcing them to flee in disarray. The undaunted troops however pursued the fleeing criminals and effectively neutralized 3 of them while several others fled with fatal gunshot injuries.
General Enenche said Troops however successfully apprehended 4 of the fleeing bandits. Furthermore, troops recovered 2 locally made rifles, 1 locally made pistol, 16 rounds of 7.62mm special ammunition, 2 motorcycles, 3 generators, 2 pairs of military camouflage uniforms, a large quantity of substances suspected to Indian Hemp, amongst other items. 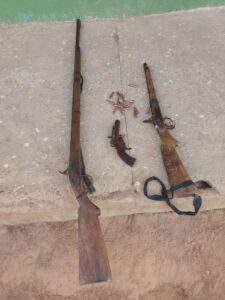 The gallant troops are presently dominating the area with aggressive patrols and are equally on the trail of the fleeing bandits in order to locate and neutralize them. Members of the general public are hereby requested to continue to provide credible information to the troops operating within their localities. General Enenche said.