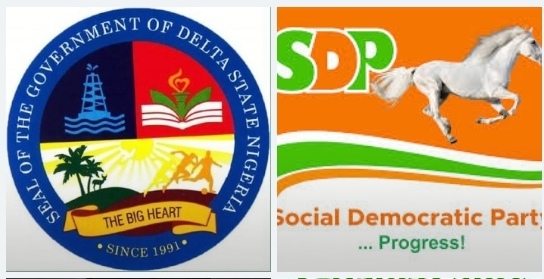 A former Minister of Education, Barrister Honourable Kenneth Gbagi of Delta State, SDP Saturday received his flag of office from the National Executives of the Party led by the National Chairman, Mallam Shehu Gaban.

Olorogun Gbagi at a well attended ceremony was received by supporters and thousand of New voters into the party.

The SDP candidate pleaded with Deltans and stakeholders especially new members of voting age to get their, PVC, Permanent Voter Cards and take back the covers not provided by other parties as well sweep the bad governance away from the state. He also shared other relevant information as excerpt below.

As the governorship candidate of the Social Democratic Party (SDP), how prepared is your party, which is believed not to have a structure strong enough to wrest power from your former party, the ruling Peoples Democratic Party (PDP), for the 2023 election?

The 2023 election is not going to be won on the basis of structure. Market women, teachers, pensioners and churchgoers will vote and they don’t have any structure. It is an election where you are supposed to pick somebody that you believe can guarantee the future of your children and children yet unborn. I am a Deltan and I am proud to say I am such a person. The choice is yours to make among us, governorship candidates. If you want to pick somebody who will make the state weaker than it is, it is your business. If you want the state to develop where you can sit down in your house and get your salary as and when due after doing your job, get your pension as and when due, it is your business, provided you will not complain after the 29th of May, 2023, if you sold your vote for a pack of seasoning or rice.

I have decided to work with the youths, teachers, pensioners, doctors and everybody that mean well for Delta State. So, the issue of structure has nothing to do with it. You don’t need to have a structure. Everybody knows me in Delta State already and they know what I stand for. So, if you know I can do the work, vote for me.

I am running under SDP and, for your information, this is the first time in my life I am standing election with any political party. There have been lots of lies. People who don’t know what they are doing are saying what they like. I have never contested an election before. This is the first time I am going to be on the ballot and I can assure that I will win the election.

It was said that you were exempted from a meeting held at the Government House, Asaba, before the PDP primaries. What really happened at that meeting?

All of you will agree that I am the closest person, as a junior brother, to [Ifeanyi] Okowa, the governor. His father, our father, sent for me and asked me to assist his son. His sister came to my house and asked me to go see their father who said he had adopted me as the second son after the governor for all that I did for the governor. The governor cannot change that adoption. Unfortunately, the father has died and only he could redo that arrangement.

By virtue of what the father, our father, had done, he is my senior brother. Now that I decided to leave the PDP with tears in my eyes, because that was a house I built, let me be on the ballot and let God decide my fate. If I am not on the ballot and I just agreed that what had happened had happened, it means I am not a man. But I am a competent man and Okowa can tell all of you that. That is why I want to prove my competency at the ballot next year.

I can tell you that whatever happened at the Government House that day gave me a better understanding of my decision to run for the governorship on the platform of the SDP.

With the way things are between you and Okowa, will you support him as the vice presidential candidate of the PDP in the 2023 election?

Take it or leave it, among all these gladiators that you see today that are telling stories of being the governor and what have you, I am their senior brother in politics. I am the only one who has served this country at the federal level as a minister of the Federal Republic of Nigeria. What have they done that compares to what I have done? You will recall that I fought for [former President] Jonathan under the Gbagi Foundation. With all the hiccups, I fought hard for Jonathan to be president. I will support a presidential candidate from the South because I am from the South. So, let us not waste time because I don’t know how to pretend.

There are insinuations that you went to the SDP because of the governor, to divide the votes in Delta Central. Are these insinuations anything to go by?

I have told you that Okowa is a brother and he remains so. On principle, Okowa cannot do anything to me. Nobody in this world can use me to do anything except God. In fact, one of the reasons why Okowa, after seven years of agreement, decided to do what he is doing now is that he said I could not be controlled. How can you control me? What am I looking for that you want to control me for? Nobody can buy my conscience in this world.

Are you on the same page with the Southern and Middle Belt Leaders Forum (SMBLF) on Okowa accepting to be running mate to Atiku Abubakar, a northerner?

E.K. Clark, as you all know, is my father. He is not my biological father but in every other sense, he is my father. He told me five years ago that Okowa was lying to me. I told him that I was ready to part ways with him because of Okowa. But today, Okowa has proven E.K. Clark right. What I am saying is that I am a southerner. I ask all southerners and everybody that has any understanding of life to support southerners. If you do not support power shift from the North to the South, your children’s children will die as slaves. We all own this country. We believe in this country. I don’t hate northerners. We must bring governance to the South for eight years and take it back to the North for another eight years. That is the most equitable thing I want done. Anything contrary is dead on arrival. Nobody will support that.

Who do you blame for your opting out of the PDP governorship primary subsequent defection from the party? Is it Okowa or is it that you could not withstand the pressure?

That question is very interesting but you appear to not understand the process. I am too wise, too senior a politician and lawyer to be stupid.

Some of you here came to ask me not to appear before DC 2023 and I told them that I would appear because there is nothing the DC ‘23 wants to say about me. Who do they have? They don’t have any candidate. Forget all of the patching. I went there as a lone ranger. I didn’t have any godfather to support me but my documents, my personality, my finances spoke for me and I turned out to be number one in that process. That’s when the DC ‘23 dissolved their process. It was dissolved after that report. First and second reports, screened to five, then screened to three and I am among the three. So, we came to a political arrangement. As a lawyer, one of the first things I did before the Electoral Act was passed was to look at it and scan it. The Electoral Act is very clear. I believe I complied with the terms of the Act. I believe that I did what was right and my statement as to why I would not participate in what I considered it was was why I left. And that is why I am legally in a position to have gone to the SDP.

What you should rather be doing is to commend me for my smartness, because if I wasn’t smart, they would have caught me in that web of people who went into an election and walked into a trap. I walked out of that trap and I am a free man. If you truly want your industries to be revived which I can do, I am the man to vote for. If you want your schools revived, teachers’ salaries paid, your hospitals equipped, if you want pensioners who are dying without their pensions rescued, if you want transparency in governance, I am the one to vote for.

If you want your industries revived, give me one year in office and come and interview me again so that I will list out the things that have been done. This state is the richest state in Africa, richer than about 34 countries in the world. I believe with all that is available here, I will place this state on the path of glory.

Being a founding member of the PDP in Delta State, what was the reaction of the national secretariat of the party to your defection?

Whoever God is going to make great, He prepares the bed for him. I must confess to you that the national officials of the PDP are good people, to some extent. A number of governors have called me to say they saw what happened and understood my position. They know I am going to win the election.

What is your take on the allegation that Okowa spent Delta State’s money to run for the vice president position?

Put it this way, this is not the first time we would see madness at play. But the instrument of governance, by law, is rested on Okowa. If he believes that these loans he is taking now, the grandchildren of Deltans must pay whether they like it or not, it is for you people to agree that loans are being taken on your behalf and you are going to pay because some of you will die before the loan is paid and your children will take over. As a stakeholder in this party, I am not aware that loans are being taken and for what they are taken for. I am not going to challenge the loans because I don’t have the power constitutionally to do so. But at the appropriate time, you people are the ones to find out what is going on with the loans.

The flagoff was well attended by former ministers, members of legislatures, business leaders among others.