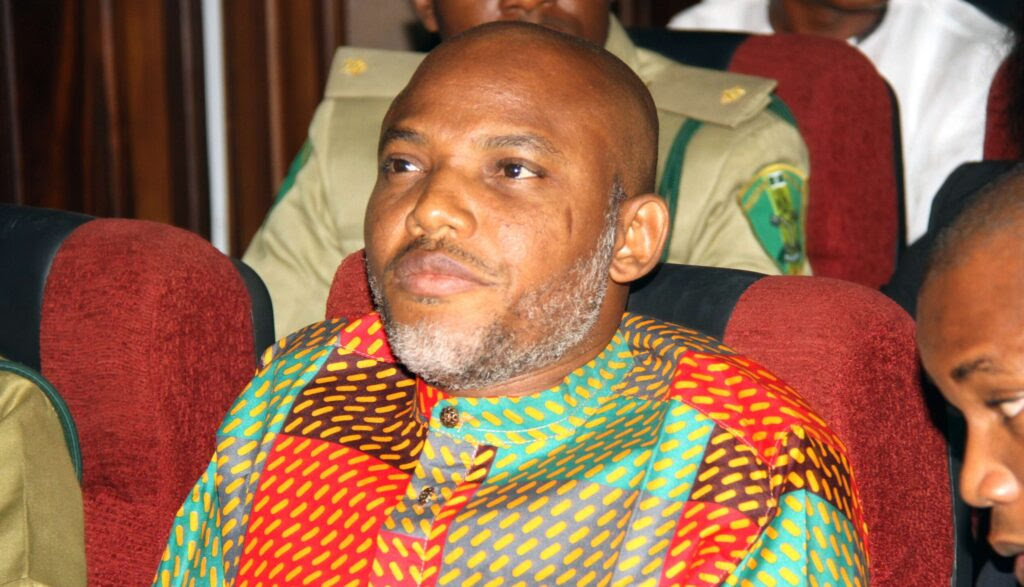 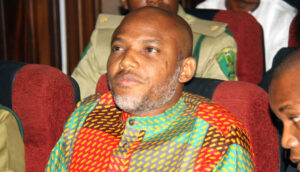 Nnamdi Kanu ordered us to bury Ikonso with 2,000 human heads, but we got only 30— ESN Commander

The arrested IPOB Leader by the Nigerian government, Mazi Nnamdi Kanu ordered us to bury Ikonso with 2,000 human heads, but we got only 30 according to one of the ESN Commanders.

The picked up and now seeking mercy Mr. Emeoyiri Uzorma Benjamin, alias Onye Army shared this with the security team of Nigeria.

Onye Army who is 28-year-old and a  Commander of the Eastern Security Network, ESN, which is the armed wing of the Indigenous People of Biafra, IPOB, that has been fingered and accused of pertaking in the killing of security agents as well as destroying private and government property in the South East and South South regions of the country by operatives of the Force Intelligence Response Team, IRT especially in Imo State who also confessed to some of the attacks on security operatives on the alleged instruction of IPOB supreme leader, Mazi Nnamdi Kanu.

His confessions in addition to Vanguard are mind blowing. He also confessed that he was part of the group that attacked the Owerri Correctional Center and freed the inmates and the attack on the country home of the Imo State Governor, Hope Uzordima, in retaliation to the killing of Ikonso, who he described as his top commander

“I am Emeoyiri Uzorma Benjamin also known as Onye Army, I am from Uzombe Town in Uguta 2 Local Government Area of Imo State, I am 28-year-old and I only attended secondary school. But I left school without writing my SSCE exams in 2014 because my father had no money.

“So, I started doing menial jobs and buying Nigeria Army forms and that of the Nigerian Navy, but I was not recruited because I was using my brother’s result. I had the intention of writing my own exam and get my own result when I get recruited into the army.

“I also went to Lagos where I secured a job as a security guard with a company that dealt in building materials. I did that job until 2017 when I relocated to my village where I engaged in carpentry jobs.

“While I was in the village one John, who is from my town met me and told me he knew I was trying to join the military but advised me to join IPOB in 2019 so I started attending IPOB meetings in Orlu every Sunday. We used to have the meetings in a building close to the Teaching Hospital.

“I attended the meeting until November 2020 when Mazi Nnamdi Kanu, formed the ESN and said he didn’t want any security agents in the South East and that all he wanted was just ESN operatives providing Security in the South East.

“I volunteered to join the ESN and I was trained in a camp close to the Niger Bridge, but I don’t know the name of the village. I spent two weeks in that camp with several other people who came for ESN training from several parts of the country.

“Some people had been in the camp before I joined them but I spent just two weeks in the camp. Before I went to the camp however, I was at a Sabbath Church in Orlu owned by one Alewa Nnwachuku, in Okporo area of Orlu.

“While at the camp, we were given military training and our phones were taken from us. We were not talking to Nnamdi Kanu directly but we were receiving his instructions from the leaders of our camp. After our training we were given boots and uniforms and were asked to go back to our state commanders.

“My state commander was late Ikonso, who was in charge of Imo State before his death. We were not given any money, we returned to our commanders with just the uniforms and the boots. When we got back to Imo State I reported back to the Sabbath Church which served as one of our camps at that time.

“Then Nnamdi Kanu ordered that he didn’t want to see any police or military check point in the South East. The order was given through radio and all the ESN State Commanders asked their fighters to comply with the orders.

“Nnamdi Kanu said we should dismantle all checkpoints and even kill the security agents manning the checkpoints because they were killing Igbo people. I believed him and obeyed the order because I had taken an oath to obey Nnamdi Kanu, who is the supreme leader of IPOB.

“During our first attack, Ikonso brought two AK47 rifles while two of our members brought two locally made guns which we used to attack a police check point in Orlu where we killed a police officer.

“Two of our members were also killed but the police officers ran away abandoning their vehicle which we burnt and took away one of the police rifles. After the operation, we all returned to the Sabbath church owned by Alewa but the police came and attacked the place.

“We then relocated to a farm belonging to one of our members in Eele area of Awidemili, Anambra State. From there we attacked several other police stations and checkpoints.

“Then Ikonso, Engineer Mike and Temple organized the attack at the Owerri Prison and Imo State Police Command, where several inmates were freed and more than 50 police rifles were carted away on the instruction of Mazi Nnamdi Kanu, because he said no body deserved to be in the prison

“We came with over 100 fighters, but on our way back to our base, some soldiers attacked us and many of our fighters were killed at Ukorji area of Imo State. We carried out other attacks on security formations in Imo and Anambra states before Ikonso was killed. I was in his residence on the night he was attacked by security agents. I fought with my own Ak47 rifle, but I abandoned it and escaped through the back gate when I expended all the bullets in the rifle.

“After the death of Ikonso we went and burnt the governor’s house and killed a security man in the house in retaliation. It was Engr Mike that led us. I was part of those that shot at the gate.

“We also burnt a house in Amowmama, belonging to someone who was believed to have given the security agents information on Ikonso. Engr Mike then took us to his village in Awedemili where we attacked a house belonging to someone he said was against our struggle and we killed two persons there.

“Mazi Nnamdi Kanu also directed us to bury Ikonso with 2,000 human heads but we have killed only 30 so far. I then relocated to Temple’s camp and Mazi Nnamdi Kanu ordered us to attack Orlu Police Division and free our fighters who were arrested and detained there.

“We went in 10 vehicles, over 50 fighters and we had over 30 rifles with us. I was in a white sienna and late Dragon was in a red colored car, but before we got to the police station we did a shooting display that was circulated on the social media on the day we went to attack Orlu police station.

“The white and red cloths we tied on our bodies in the video were charms which we call local bullet proof and we prepared charms with the heads of 10 young girls.

“Before we proceeded to attack the Orlu Police Station, Temple and Mike brought the suggestion that we should get the girls we used for the charms and we got them here in Imo State. But before we got to the Orlu police station, a police armored vehicle attacked us and killed 12 of our fighters and injured four.

“After we escaped from that attack, we went to our camp at Idiato to relax waiting for further directives. They are not paying us any money, they said we are freedom fighters.

“Most of the police officers I killed were also Igbo people. I am happy that Nnamdi has been arrested. But I am begging for amnesty from the Federal Government.”