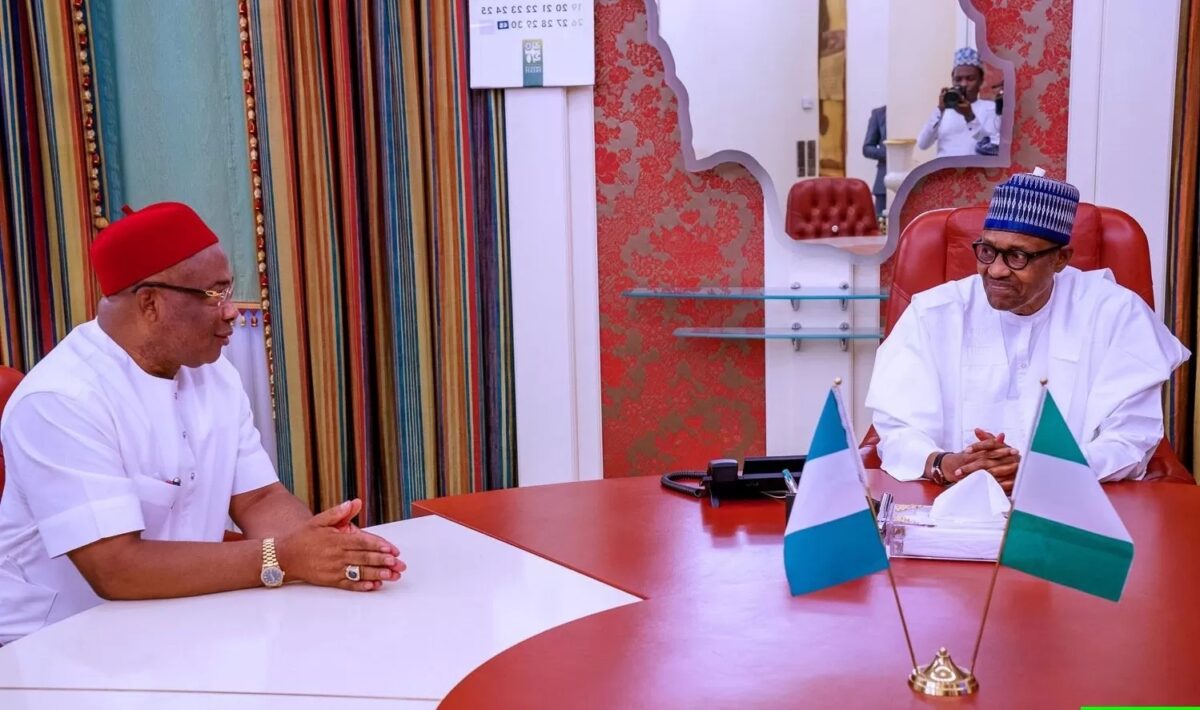 President Muhammadu Buhari on Tuesday approved the deployment of advance technology to tackle security challenges in the southeastern part of Nigeria.

Speaking on his mission to the seat of Power, Uzodinma said he had come to see President Buhari in order to appeal to him to approve technology deployment to enable the region deal effectively with the rising cases of insecurity and other violent Crimes.

According to him, ” with the president’s approval, advanced surveillance equipment will soon be delivered to the region that will enhance the fight against insecurity without collateral damage.”

He said he was also at the Presidential Villa to thanked the president for what he has done for the region including the recent conversion of the Federal Medical Center Owerri to a university teaching hospital for the Federal University of Technology, and the approval that converted Alvan Ikoku College of Education to a federal college of education.

In his words, “The approval to convert Federal Medical Center Owerri to a university teaching hospital for the Federal University of Technology, the approval that converted Alvan Ikoku College of Education to a federal college of education amongst other things is something to be proud of in the region.

” Only two weeks ago, Igbos that came home from Lagos and outside South East enjoyed the benefit of the second Niger Bridge something that is worthy of of commendation.

“I also appealed to him for further support, to support us with some technological deployments, we have planned to be able to do an advanced kind of security control in the South East. And he has also given his approval to that.

“And any moment from now, we’ll be getting some surveillance equipment and some modern technologies that will help us manage security so that we can fight crime with little or no collateral damage to the environment.”

On assurance for Imo State in the New Year, he stated: “Well, my people are enthusiastic and committed Nigerians and we believe in the unity of the country. And we believe that for us to grow as a people, we need the support and cooperation of federal government, and that I’ve always stood for. So, going forward, I know 2023 will be better than 2022. And the level of development, we witnessed from 2020 to 2022 will be improved upon.

“ my people have seen a lot of thing. If you go to South East, in imo State for instance, we got approval of Mr. President, that has now enabling the government imo partnering with the Nigerian navy to dredge oguta river to orashi River to the sea, that is opening up that maritime route, then if there is a naval base, that we will now manage and control, pipelines vandalism, crude oil theft, and all forms of criminality that besieged that area for a very long time. And the crime is has gone down tremendously, since the Navel base was established.

“So I think we have hope for a better Nigeria. The road that we just completed that was commissioned by Mr president, the Owerri to orlu, dualised expressway, Mr President has approved that imo state government be refunded.

“The good news is every day I come to Mr president, one positive approval or the other. So our people are happy, we’re committed, we’re happy, we have never had it so good. So and that is why I continue to tell you, that the party to beat in my state is APC. Those who are fighting me in my state are not saying we’re not working. They’re not saying we’re not developing the place. They are not accusing us of corruption. All they are saying is that they are contriving, instigating insecurity out of desperation, and then blaming the security on a government.

“I’ve seen at the sub national that critical security measures are managed and controlled by federal government. So I cannot be blamed for insecurity, because you cannot single out imo state. national security is about the 36 states of the Federation and FCT inclusive.

“So, I think we’ve done so well. And I’m happy by the grace of God, as soon as we’re able to bring the security to naught, we’ll have an environment that we will all celebrate and be happy with.

“During this season, we had relative peace in imo state, and Christmas is a very critical period for us and new year is also very critical. And apart from a few scratches in the hinterland we are on top of the security situation now in Imo state.” he concluded .