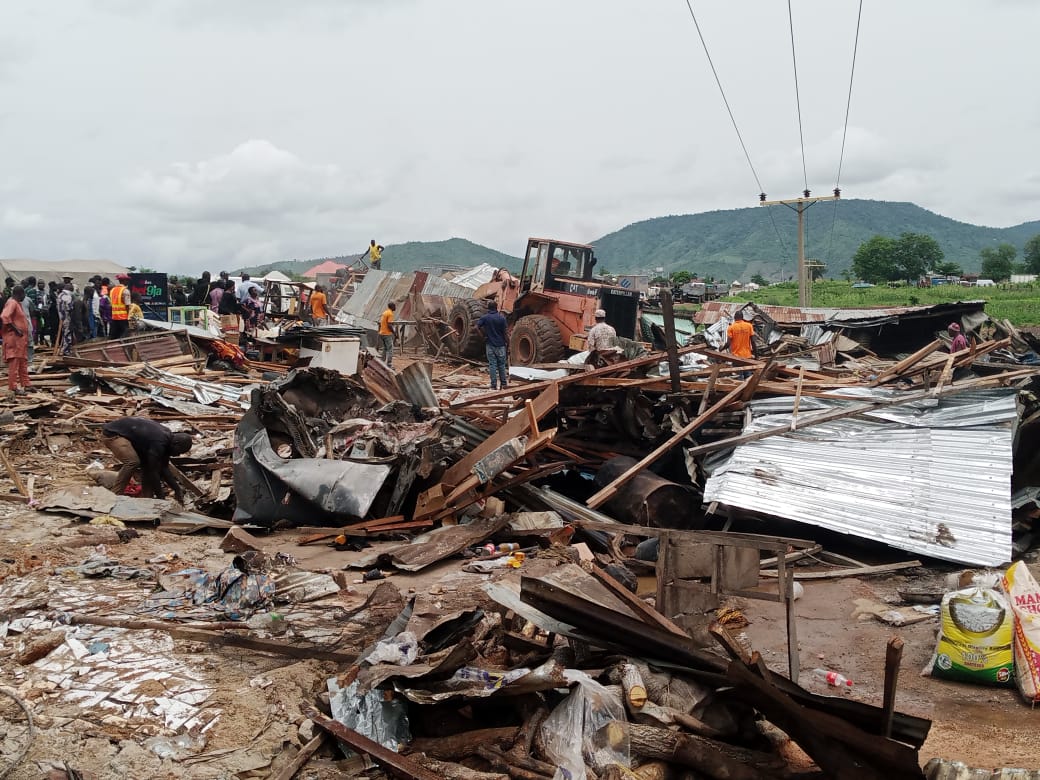 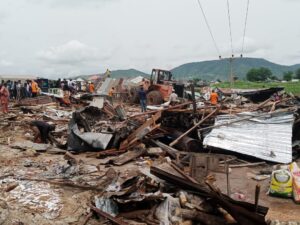 In continuation with its intensive clampdown on environmental nuisances posing serious security threats to lives and property around the Nigeria Capital, The Federal Capital Territory Administration (FCTA) City Sanitation Team has stormed and cleared notorious hotspots
beside and adjacent Federal Government College, in Kwali Area Council of the Territory.

Others affected were makeshift structures and clusters of kiosks erected by artisans, POS operators and petty traders inside the premises of uncompleted shopping plaza along the corridors of Kwali axis of the Abuja-Lokoja express way.

Explaining the exercise, Senior Special Assistant on Monitoring, Inspection and Enforcement to the FCT Minister, Ikharo Attah, who led the enforcement team, said the place in recent time became a serious security concern to the government, as several criminal activities were traceable there.

Attah said it was discovered that these shanties were heavily harbouring criminals, leaving the government with no other choice than to come and clear them.

He said: “What informs the decision to storm Kwali, an area which I think we haven’t visited in several decades is the fact that we have security concerns here.

“Three months ago, we had an extremely ugly incident, as this particular dangerous spot, where the police and other security agencies had tried to come in, to carry out a raid against criminals, they had exchange of gun fire with some persons here.

“Although they made massive arrests, but we discovered that these shanties are heavily harbouring criminals. Because they are illegal structures, we had to come and clear them.

“There are several issues here about safety of lives and property, as whatever built here just directly under the power high tension cable amidst several other illegalities.”

On whether the dislodged persons were duly notified, Attah said: ” You could see removal notices and markings on walls, as we marked everything three weeks ago, and we came and remarked again last week before returning this week for the actual removal.

According to him : “What the FCTA is sending out as a message to everyone is that our coming to Kwali, we are hoping to reach Abaji, Gwagwalada, Kuje and Bwari Area Councils, is that the entire 7,315 square kilo meter of the FCT are all areas where enforcement can take place.

“The enforcement is not just limited to AMAC and Bwari alone, but to the entire FCT . So we are going to every single area, and we will be cleaning and removing all shanties and kiosks especially those that are harbouring criminals that are wrecking havoc on this city.”

Reacting to the development, one of the affected persons, Ayuba Aliyu, a dealing in POS and Phone accessories in the place, said it has dislodged about five hundred people living and trading there, free of charge.

He however, appealed for the government to provide succour to the affected persons, who are mainly youth, so as to prevent them from taking into any form of crime, given the prevailing insecurity situation.

Giving the exercise a human face, it was observed that the affected occupants were allowed time to remove their wares and belongings, before the bulldozer cleared the structures.