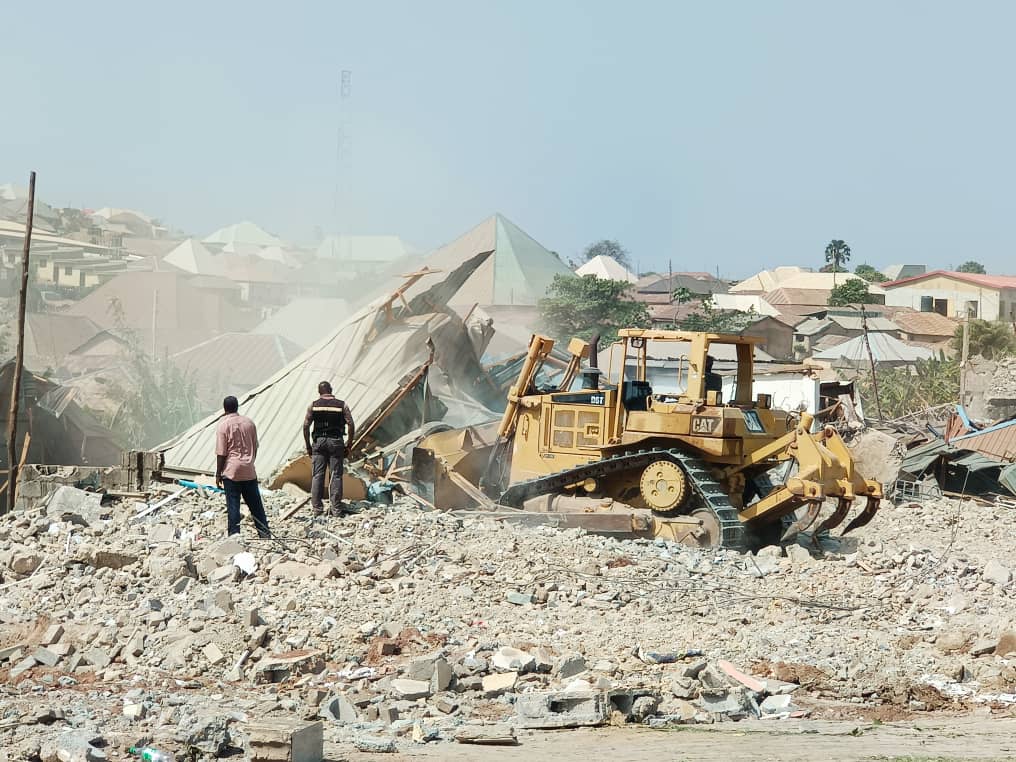 Natives of Abuja the Nigeria Capital have been assured of the safety of their homes and properties as the ongoing mass demolition exercise to make Abuja free of criminal hideouts is not targeted at them.

The Federal Capital Territory Administration (FCTA) on Thursday clarified that the ongoing demolition of illegal structures at Guzape and other parts of the territory are not targeted at the Abuja natives.

Mr Ikharo Attah, Senior Special Assistant on Monitoring, Inspection and Enforcement to the FCT Minister, made the clarification while answering question from newsmen at the scene of the demolition, on Thursday in Abuja.

The minister’s aide explained that the FCT Minister, Malam Muhammad Bello has strong love and regards for the 17 Graded Chiefs and all the original inhabitants or natives of the nation’s capital.

According to him, ” It is false and misleading for anybody to think or insinuates that the ongoing demolition of illegal structures at Kpaduma II village in Guzape and other part of the Federal Capital Territory is target at the Abuja natives.

” The Abuja natives are very peace loving people and the FCT Minister, Malam Muhammad Bello has strong love for the Abuja natives. If you observed the minister and the 17 graded FCT Chiefs are very close. From the Ona of Abaji to the Sapeyi of Garki and several others are all very close to him.

” Therefore, the efforts of the FCT Administration in trying to rid the territory of environmental nuisances and illegality are not and never target at the Abuja natives.”

Attah said most of the people that were affected by the exercise are those who bought land from the natives.

” And that is the irony. Take a look at all of these places is not an area for the natives. If it were the native houses you will have seen them gathered because they will have nowhere to go

” But up there you could see the village and it is not touched because the villagers have right to resettlement and compensation.

” So, the minister has ask us to remove all the squatters who bought land from the natives in contravention of the law, while the natives have to be respected and be allowed for possible reintegration and resettlement depending on what the FCT Administration intend to do.”

On his part, Mr Kaka Bello, the Head of Monitoring and Enforcement, Abuja Environmental Protection Board (AEPB), also said that the area was earmarked for school but some people decided to defiled the plan on the land and allocated it for illegal commercial activities.

” If you look around you will see a timber shade, you can see blocks making factories and you can see bamboo sale spots there. All these illegal commercial activities are not supposed to be here.

” And that is why we are here to remove all these illegalities to ensure that the proper lan use designated as a school can be in place,” Bello said.

Reacting to the demolition, one of the occupants of the affected structures, Mr Matthew Igba, appealed to the FCT Administration to ensure constructive engagement with the people when embarking on such exercise.

He alleged that the structure were he was living with his family was not marked for demolition, ” but we only see bulldozers coming to demolish our structures.

Also, Mr James Ibekwe, who sells building materials, said “everything that has happened has happened. This is where we do our business and get out daily income.

” All of a sudden we just see something like this. The FCT Administration only gives us three days notice and before we know what is happening our business place is gone.” he noted.