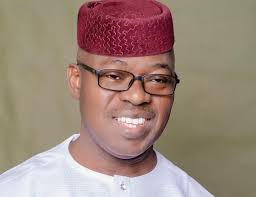 Am Still in the race, Segun Oni Declares

Our attention has been drawn to yet another wicked and senseless rumour sponsored by the sinking All Progressives Congress (APC) that the leading candidate in next Saturday’s governorship election in Ekiti, Chief Segun Oni is planning to step down.
It went further to allege that Oni has met with the Presidential candidate of the APC, Asiwaju Bola Tinubu and President Muhammadu Buhari on the matter.

This is another lame propaganda from the rumour mill of the leprous APC-led government of Governor Kayode Fayemi and his band of desperate power mongers who have long lost touch with the people of Ekiti.
Segun Oni at a press conference earlier today (Wednesday) had debunked the wild rumour, saying “those conceiving such idea need to have their heads examined” adding that there is no iota of truth in this, just as in every other falsehood being churned out by the APC to confuse the unsuspecting public.
“Have you ever seen a sane man withdrawing from a contest he is divinely destined to win? He asked.
According to Oni, he has never met with the President, Asiwaju Tinubu or any member of the APC for any reason whatsoever in the last few years adding that he is fully in this race and poised to win, armed with the massive support of Ekiti people, home and abroad.