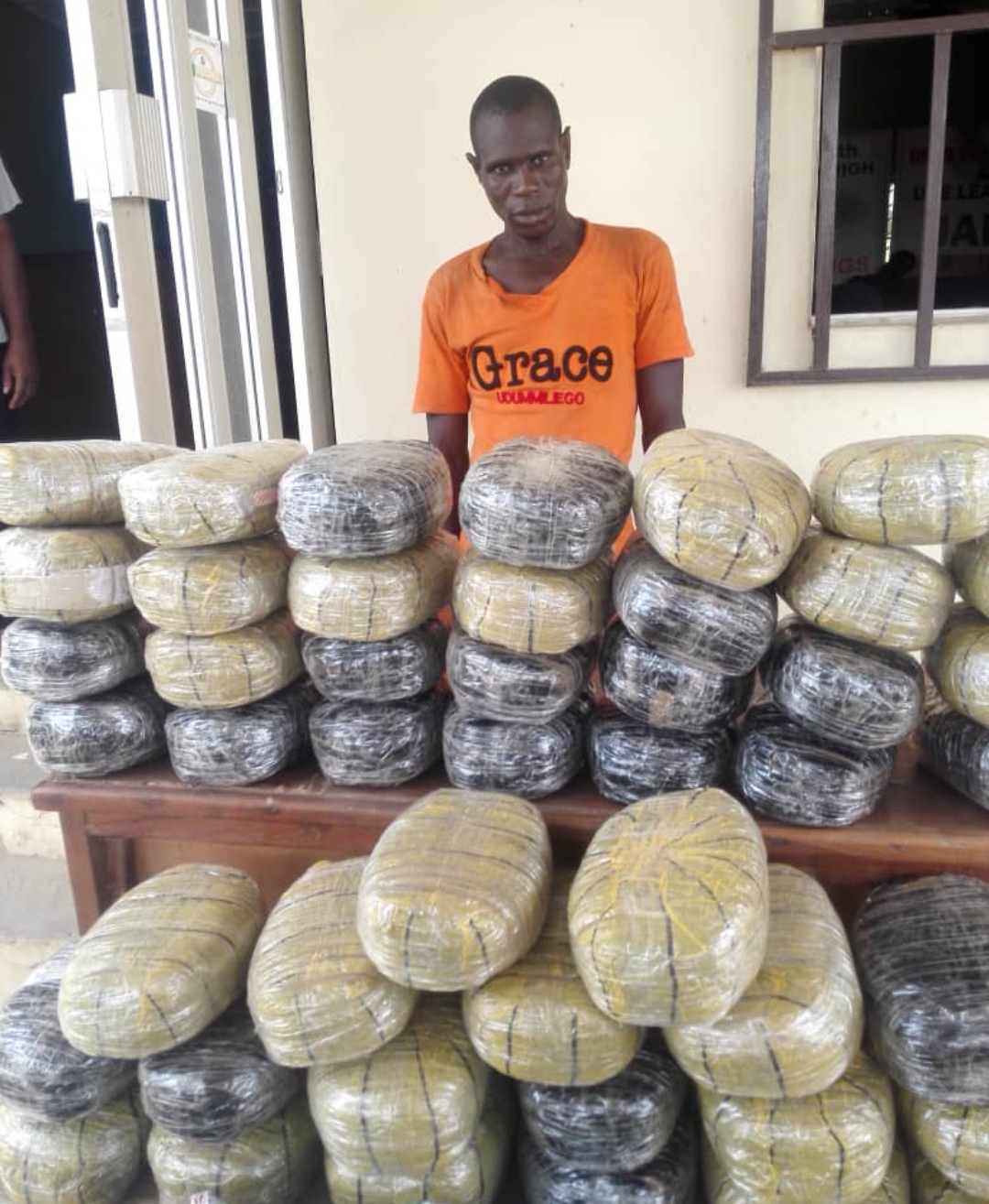 A major drug baron nabbed and skunk confiscated by NDLEA

It was indeed a bleak Easter for the most wanted drug baron in Nasarawa state, Sami Ashoko as he did not only spend the festive season in custody, his warehouse filled with skunk was also raided and 100 bags of the illicit drug weighing 1,095.3kg seized. 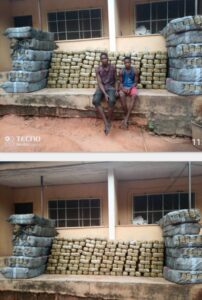 Same fate also befell members of another cartel who were arrested in Iyamho, Etsako West Local Government area of Edo state and their illicit consignment weighing 1,330kg meant for Bauchi state equally seized. Both syndicates were busted on Friday while trying to distribute their illegal substances for the Easter sales.
In Nasarawa, Ashoko, 39, who hails from Ibilo in Akoko Edo area of Edo state, was arrested in Shinge, Lafia based on actionable intelligence. A team of operatives had stormed his warehouse in Lafia and recovered 100 bags of cannabis weighing about 1.1 tons or 1095.3 kg. 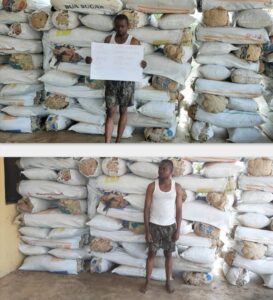 According to the Commander, Nasarawa state Command of the NDLEA, Justice Arinze, “Sami Ashoko is the most wanted drug baron who has been on our watch list in Nasarawa state. This seizure has beaten the previous record of 45 bags weighing about half ton recovered in January 2021 as the highest singular seizure of cannabis since the inception of the Command in 1999. The seized consignment was meant for Easter sales, and which he expects to sell out in two weeks.”

In a related development, two members of another drug cartel, Adamu Badamasi and Adamu Abba were also arrested same day in Edo state while trying to move
950 compressed blocks of cannabis weighing 1,330kg, procured from Uzeba, Owan West Local Government area of the state to Bauchi state for Easter sales.
Commander of the Edo state Command of the anti-drug law enforcement agency, Buba Wakawa disclosed that the arrest and seizure disrupted the Easter sales plan of the cartel, which tried to escape arrest through hinterland routes in their white colour Peugeot J5 space bus with registration number Lagos JJJ 722 XC.
In the same vein, another trafficker who supplies drugs to some notorious drug joints in Abuja was at the weekend arrested along Gwagwalada expressway, FCT while bringing 46 compressed blocks of cannabis for drug dealers in Mabushi and Banex areas of the capital city. The Commander, FCT Command of the Agency, Mohammed Salami Sokoto said the notorious drug supplier has confessed being a major supplier of illicit substances to major drug joints in Abuja.

Chairman/Chief Executive of the NDLEA, Brig.General Mohamed Buba Marwa (Retd) has in his reaction to the Easter weekend operations commended officers and men of Nasarawa, Edo and FCT Commands of the Agency for their efforts, adding that the skunk seized is certainly less illicit substances available on the streets.