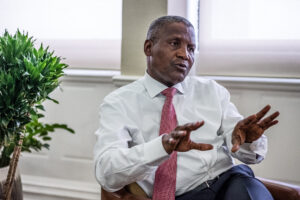 Africa’s richest man and Chairman of Dangote Industries Limited, Alhaji Aliko Dangote, and the Chairman of Flour Mills of Nigeria Plc, Mr. John Coumantaros, have said the establishment of a new sugar refinery plant in the country by BUA Group posed a threat to the attainment of the National Sugar Master Plan (NSMP) as well as sustainability of Nigeria’s local sugar industry.

They argued that the country currently has enough refining capacity to meet national demand.
In a joint petition to the Minister of Industry, Trade and Investment, Chief Niyi Adebayo, dated January 28, 2021, the duo protested the recent commissioning of a sugar refinery in Port Harcourt, Rivers State, by BUA International, one of the operators in the sugar industry.

But in a swift response, Chairman of BUA Group, Alhaji Abdulsamad Rabiu, said the company took serious exception to what he described as the ludicrous claims by his two major competitors, pointing out that his sugar export-focused project in Port Harcourt, would not affect in any way, the backward integration programme, stressing that “the only way it will affect Nigerians is that Nigerians will pay lower prices for sugar.”

However, in the ensuing row among the major players in the industry, Chairman, BUA Group, Alhaji Abdulsamad Rabiu, said its investment in Port Harcourt does not in any way pose a threat to the country’s sugar policy, adding that it will rather checkmate arbitrary price increase by the major players among other benefits to the country.

Adebayo yesterday confirmed the rancour among the operators while reacting to the news teams enquiry.
But, he declined further comments on the matter.
The minister said: “Unfortunately, I’m unable to comment as the matter is already subjudice. Thank you very much for your understanding.”

However, in the letter to the minister, Dangote and his counterpart, argued that they had in 2019, warned about the risk of establishing a new refinery, adding that they got assurances that in line with the federal government’s policy on Backward Integration Programme (BIP), “no new refinery will be allowed to operate in Nigeria.”

They also pointed out that a tremendous amount of work was required by all stakeholders to achieve the intended objective behind the sugar policy, which is to among other things, encourage backward integration to ultimately attain self-sufficiency in local sugar production.

They specifically urged Adebayo, to prevail on the Nigeria Customs Service (NCS) and the Central Bank of Nigeria (CBN) to ensure that the provisions of the NSMP are enforced and that no additional allocation of quota should be given for raw, VHP, or refined sugar for the sugar refinery in Port Harcourt for local market production.

Among other recommendations, they said no allocations should be issued or applications considered for quota intended for re-export of sugar as this would be difficult to monitor and may be open to abuse.
The petition added that, “an investigation should be conducted to determine the quantity of raw sugar imported by the refinery in Port Harcourt and the appropriate penalty in terms of duty (60 per cent) and levy (10 per cent) be levied on the company.”

It added that the customs should be mandated to comply strictly with the authorised quota allocations in clearing cargoes and administering levy and duty and that the CBN be requested to monitor the registration of “Form Ms” in line with the quota allocation.

In the petition, they recalled that under the revised guidelines released by the National Sugar Development Council (NSDC), it was made absolutely clear that the allocation of quotas henceforth shall be on quantitative and verifiable improvements in the BIP of operators in the industry.
They maintained that key performance indicators for assessing and scoring performance had been clearly spelt out and communicated to all players in the industry.

The petition alleged that the midterm assessment conducted by the NSDC had concluded that BUA had “failed to invest substantially in local production or comply with its undertakings under its BIP.
“Even before its surreptitious investment in additional refining capacity, Nigeria already has enough refining capacity to satisfy demand today well into the future,” they said.

The petitioners maintained that the business logic behind the investment in the new refinery was clearly defective adding that, “BUA intend only on importing and refining raw sugar whilst claiming to be investing in developing sugar plantations in order to qualify for quotas to import raw sugar.”
They further alleged that the Port Harcourt refinery was clearly undertaken to deliberately undermine the federal government’s sugar policy.

“We are particularly surprised by the brazenness as we believe that the choice of location and the publicity campaign behind the investment has been deliberately engineered to provoke public sentiment and pit the federal government against its people,” the petition added.
It said unless the ministry of industry, trade and investment plays an effective policing role of the NSMP, the country’s dream of becoming self-sufficient and indeed a net exporter of sugar would be defeated.

“The impunity with which BUA has contravened the provisions of the NSMP has placed the other players who are abiding by the regulations, not only at a significant disadvantage but has discouraged them from undertaking the huge investments that would deliver the desired objective of 100 per cent local production of sugar, unless, of course, the ministry wades in and addresses the situation,” they added.

Consequently, in a letter issued by Adebayo, dated February 10, 2021, which was addressed to the Chairman of BUA Group, Rabiu, following the petition by Dangote, the minister had requested for detailed information on the BUA Sugar Refinery in Port Harcourt, particularly the company’s plan to service the Nigerian and export markets from its refineries.

BUA, in its reaction to the minister, dated February 11, 2021, which it forwarded to the news team however, took “serious exception to the ludicrous claims by its two major competitors that it aims to circumvent the BIP of the sugar industry.”

The company pointed out in its five-page response, that it was unreasonable for it to be working against the backward integration policy of the industry, having invested billions of naira in the initiative, which is almost nearing completion.

Rabiu, specifically assured the minister that the company’s sugar-export focused project in Port Harcourt, would not affect in any way, the backward integration programme adding that “the only way it will affect Nigerians is that Nigerians will pay lower prices for sugar”.

He explained that though the Port Harcourt refinery is mainly for exports, BUA is allowed under the Nigeria Export Processing Zones Authority (NEPZA) Act and current approvals/rules to intervene locally in order to stabilise sugar price, “where it is absolutely necessary- in the face of arbitrary price increases and collusion to force scarcity of the product locally.”

He said: “The same NEPZA Act upon, which this project is based, gives the permission to process, add value, and export at the same time. Companies under this act are allowed to process and if they so wish, sell 100 per cent of their production in Nigeria with payment of duties based on the current raw materials tariff.
“As a matter of fact, Aliko Dangote of Dangote Industries, who is one of the complainants alleging and attacking this approval has also applied and obtained the same approval for his refinery project in Lekki, Lagos State where he is currently enjoying the same benefits of being in an Export Processing Zone (EPZ).”
He added: “What BUA sugar is doing is legal and within the confines of the law. We have not done nor are we doing anything wrong.”

Rabiu further explained that the EPZ under which its Port Harcourt sugar project is sited went through a rigorous two-year review process before being forwarded to the ministry for approval of President Muhammadu Buhari, adding that only the president alone is constitutionally empowered to approve an EPZ license.”

According to the BUA Group Chairman: “Anything that is done to attack this project in any way, form or any guise attacks Mr. President’s approval and we will do everything to ensure our rights are not trampled upon.”
He said BUA’s Lafiagi BIP is on track to be completed by the end of the year as well as commence production by the end of 2022.

Rabiu also warned that any action that tampers with the current approval is capable of eroding investors’ confidence under the EPZ.
He disclosed that the company had spent over $250 million on the Port Harcourt project, which currently employs over 1,000 Nigerians and has a significant economic impact.

He said: “To try to shut it down or stifle its operations will cost jobs and lost economic impact.”
He added that BUA remained the only company of the three dominant players, spending serious money and seeking to complete its BIP project by 2022, stressing that,” we need to start asking firm, hard questions of the two other players.”

The letter, however, urged the minister to remain firm and resolute in the discharge of his duties as he had always done, adding that BUA remained committed to its obligations regarding the BIP and the NSMP, adding that “we believe that time has come to call all players to true account.”

Meanwhile, Dangote Sugar Refinery PLC (DSR) has denied engagement in price-fixing, saying it is strongly committed to BIP.
It said in a statement by its Group Managing Director, Mr. Ravindra Singhvi, last night: “DSR wishes to vehemently refute the allegations and assertions in their entirety as the false allegations are geared at tarnishing the good name and brand of Dangote Sugar Refinery Plc and Dangote Industries Limited.

It also added that the company is socially responsible and considers price-fixing to be unethical.
“Such allegation is highly mischievous and a calculated attempt to smear the reputation of DSR. DSR can only sadly conclude that the online publication is mischievous and geared at creating some form of undue advantage to some Industry players, it said.

It explained that the company began its BIP with a 10-year sugar development plan, to produce 1.5 million MT per annum of sugar from locally grown sugarcane. The Project commenced with the acquisition of a large expanse of land in strategic locations in Taraba State, Adamawa State and Nasarawa State.

To this end, it added, three (3) BIP sugar companies; Dangote Taraba Sugar Limited, Dangote Adamawa Sugar Limited, Nasarawa Sugar Company Limited were incorporated.
The company, it explained further, had commenced rehabilitation and expansion of its sugar factory at Numan, while sugarcane planting had also commenced in the two other BIP locations.

“DSR has a responsibility to the government, the good people of Nigeria and the Sugar Industry and all other stakeholders to protect the integrity of the Sugar industry and wishes to assure its stakeholders as follows: It will do all that is necessary to vehemently protect the integrity of the Sugar Industry, it is not engaged in price-fixing and it encourages healthy competition amongst the players,” the company said.

It said it had notified the Minister of Industry, Trade & Investments through a letter dated January 28, 2021, asking the minister to investigate the matter.
“We believe our action is in line with our responsibility as a major stakeholder to alert the supervising Ministry on activities that would derail the plan of the Federal Government in its drive to self -sufficiency in Sugar under the NSMP,” DSR said.