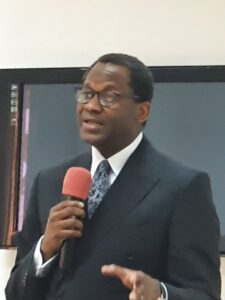 Mr Babatunde Irukera, Executive Vice Chairman of the Federal Competition and Consumer Protection Commission (FCCPC) has said that the Commission is working towards making estimated billing unattractive for power holding companies so as to enable them make prepaid meters available for consumers.

Irukera who said this during an interaction with journalists on Tuesday in Abuja, wondered why power distribution companies should issue exorbitant estimated billings to consumers when they have not given light for a while.

He lamented the difficulties in procuring pre-paid meters, describing some billings as arbitrary.

He said, “How can you be billing people who you have not given light for a while?

“We are working towards making estimated billing unattractive for Discos to enable them to see reasons to make prepaid meters available for consumers”.

Speaking on the recent raids on loan sharks, Irukera, said no fewer than 30 bank accounts operated by illegal loan organisations.

He said that the Commission was currently engaging some major loan companies affected by the Commission’s raid, saying that the move is to ensure sanity in the sector and prevent abuse of consumer rights.

Irukera said: “The day we conducted the raid, we have some limited information about the bank accounts that some of the loan companies operated.

“Between the time we raided and now, we have discovered additional 30 accounts and all have been frozen and we will continue to freeze as we discover them.

“I am certain that with the actions that we have taken and the nature of the engagement we are having with the loan companies, at least three of the major ones that their businesses have been severely affected by either our search or the account closure, they are modifying.

“It will take some time but I can assure you that the space is changing now”.

He said that the Commission had engaged Google and Apple Stores to take down some loan applications from their stores, noting that there were certain processes required for that to happen.