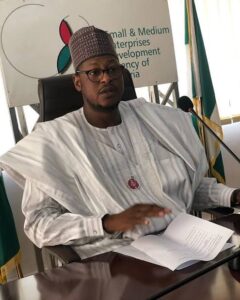 The Small and Medium Enterprises Development Agency, SMEDAN, has announced the death of one of it’s board member Chief Egwu Nnachi Chima.

Chief Chima died in a medical facility in Abuja on Friday after a brief illness.

A statement from the Corporate Affairs Unit of the Agency stated that the late Chief Chima who hails from Ebonyi state represented the South East geo political zone on the board.

In a condolence message to the family of the deceased, the Director General and Chief Executive Officer of the Small and Medium Enterprises Development Agency of Nigeria, SMEDAN, Dr. Dikko Umaru Radda described the death of the board member as a shock, and a great loss to the Agency.
Radda, said the late Chief Chima would be remembered for his services to the Agency, particularly his passionate love for the development of MSMEs in Nigeria.

He said Chief Chima as the Board Member representing South East geo political zone has within his stay projected the image of the Agency very well and would be remembered for his friendly dispositions and vibrant contributions during board meetings. He extends his deepest sympathies to the family and prayed for the repose of the deceased.

Similarly, the Chairman of the Governing Board of SMEDAN, Otunba Femi Pedro in his condolence message to the family of the deceased said he was heartbroken and saddened by the sudden demise of the Board member.

He described the late Chima as a wonderful person with so many memories of him making useful contributions towards the progress of the Agency and fighting for the welfare of the people of Ebonyi state.

Otunba Pedro recalled that Chief Chima was a truly extra ordinary man, humorous, charming and widely admired and respected by all members of the Board. He will sorely be missed, and will never be forgotten, he prayed God to grant him eternal rest.