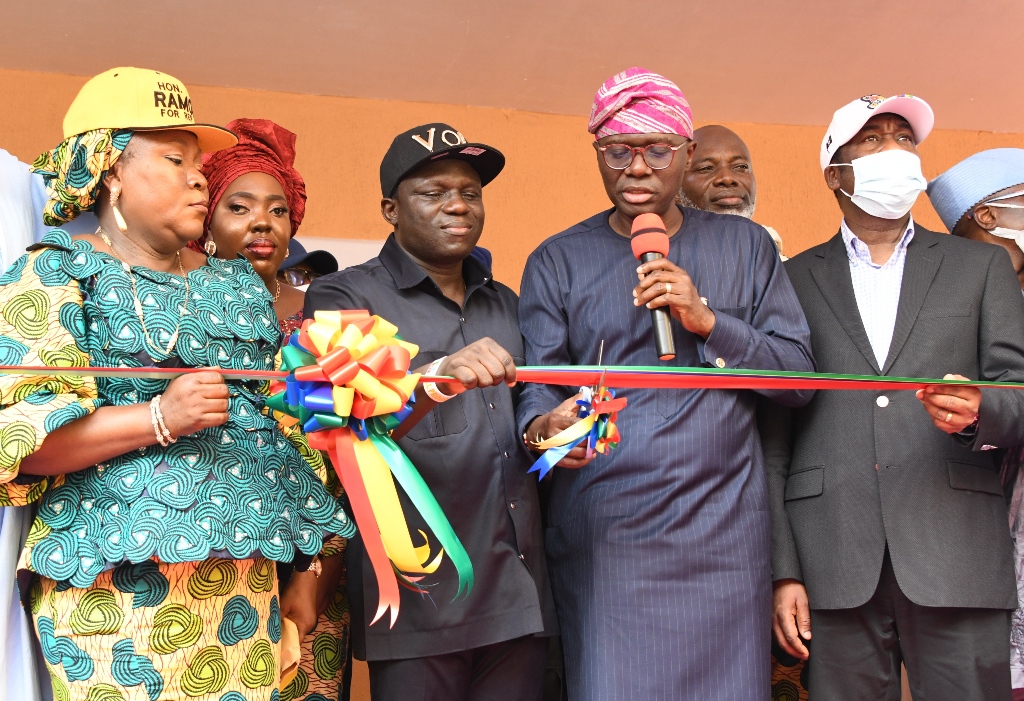 •‘Your second coming not in doubt’, Residents tell Sanwo-Olu

A working visit by Lagos State Governor Babajide Sanwo-Olu to Amuwo Odofin area of the State, on Wednesday, grew to become a political carnival, as residents trooped out in their numbers to give the Governor a rousing welcome into their community.

The Governor, in company of his deputy, Dr. Obafemi Hamzat, and cabinet members, also carried out a first-hand assessment the State Government’s ongoing projects and familiarised himself with the needs of residents in the axis.

Sanwo-Olu described Amuwo-Odofin as “a strategic base” of assets critical to the actualisation of the economic potentials of the State. Apart from connecting Lagos to an international border, he said the council also showcased the success of the State Government’s inter modal transportation system.

Amuwo-Odofin is a major beneficiary of Sanwo-Olu administration’s infrastructural renewal and expansion programme, which cuts across various sectors, including transportation, road and education, among others. The State’s Blue Rail Line project, which will be completed by last quarter of this year, traverses Amuwo-Odofin.

The Governor reiterated his administration’s full commitment to delivering more dividends of democracy to Amuwo-Odofin residents, adding that the State Government was committing more investment in critical infrastructure projects that will be of benefit to the people.

He said: “It is a great delight and honour to formally commission the newly constructed Primary Health Centre named after our mother and mentor, Senator Oluremi Tinubu, as part of my scheduled activities during my working visit to Amuwo Odofin Local Government Area and Oriade Local Council Development Area. The completion of this health centre is a commendable achievement that perfectly aligns with our administration’s T.H.E.M.E.S Agenda to prioritise provision of quality healthcare for our residents.

“Lagos has always been a worthy model for the rest of the country in the delivery of quality and people-oriented governance at the local level. The idea of a Local Council Development Area (LCDA) system co-existing with the Local Governments, as pioneered by our leader, Asiwaju Bola Ahmed Tinubu, has not only been a hugely successful political innovation in Lagos, it has also seen enthusiastic replication in other parts of the country.

“The vision is reaping the dividends as seen in the quality of people-oriented projects being delivered to the people of Amuwo-Odofin by the chairman. The modern healthcare facility is what our vision for infrastructural renewal of our State looks like. With high-impact projects that cut across many communities and improves quality of life and the ability to earn a legitimate living, Amuwo-Odofin’s landscape is changing for good.”

Speaking on the infrastructure projects initiated by his administration in Amuwo-Odofin, Sanwo-Olu said there would be a huge relief for residents along Lagos-Badagry Expressway, as the stretch from Iganmu to Okokomaiko being handled by the State Government would be delivered by the middle of the year.

The bridge components of the Expressway, Sanwo-Olu said, are scheduled for completion by the end of this year, including the Iyana-Iba Interchange Bridge initiated to resolve perennial traffic gridlock on the axis.

In line with his Government’s focus on inter-modal transportation, the Governor said the State was simultaneously constructing four jetties in Amuwo-Odofin and Oriade LCDA, which would boost waterways transport. He added that two vital roads connecting the jetties were currently being rehabilitated, including the Buba Marwa Road, which provides access to Ijegun-Egba Jetty and tank farms in the area.

He said: “With regards to road infrastructure, I am pleased to note that we have started the reconstruction and upgrade of Navy Town Road, which connects Old Ojo Road to the Central Bank Estate/Training School and the Nigerian Navy Installations in the area. I know how important that road is to the people of Amuwo, and I want you to know that by this time next year, you will be commuting on a brand-new road.

“In education, we are completing construction of new classrooms in Festac Senior Grammar School, we have added new classrooms to Festac Junior Grammar School, new blocks of classrooms to Ijegun-Egba Primary School, in Agbowo Senior Secondary School and in Agboju Primary School. These are some of our interventions in expanding access to basic education. Only yesterday (Tuesday), I received the certificates for two brand-new universities to complete the one that we have in Ojo.”

Sanwo-Olu, who also had an open interaction with the residents, took note of some of their complaints and list of expectations. The Governor promised he would “appropriately address” issues raised in the feedbacks, adding outcomes would be communicated to the community.

Buraimoh said Sanwo-Olu became the first Governor to pay a working visit to the area and commission council projects.

The council boss said the new healthcare centre was built to bolster quality care, given the inadequacy of the existing facility to cope with overwhelming demands.

Braimoh said although the project was conceived as a Primary Health Centre, the design and capacity of the facility were upgraded to provide a semi-secondary healthcare services.

He said: “The PHC is named after Senator Oluremi Tinubu in recognition of her contribution to child health development in Lagos and several health-focused initiatives she is championing. The council administration under my leadership has been purpose-driven. With committed lieutenants, we have pursued the delivery of several infrastructure projects that will serve the people.”

“This administration prioritises people’s welfare and their security. We have strengthened our local security formations and make necessary equipment. We have donated operation vehicles for the police and created monthly allowance for the police to support their duty.”

Former Speaker of the House of Assembly, Rt. Hon. Abayomi Kiyomi, who spoke on behalf of Amuwo-Odofin residents, praised Sanwo-Olu for according priority to expansion of public infrastructure in the area, noting that the Governor’s second coming was not in doubt and would be more rewarding in service delivery.