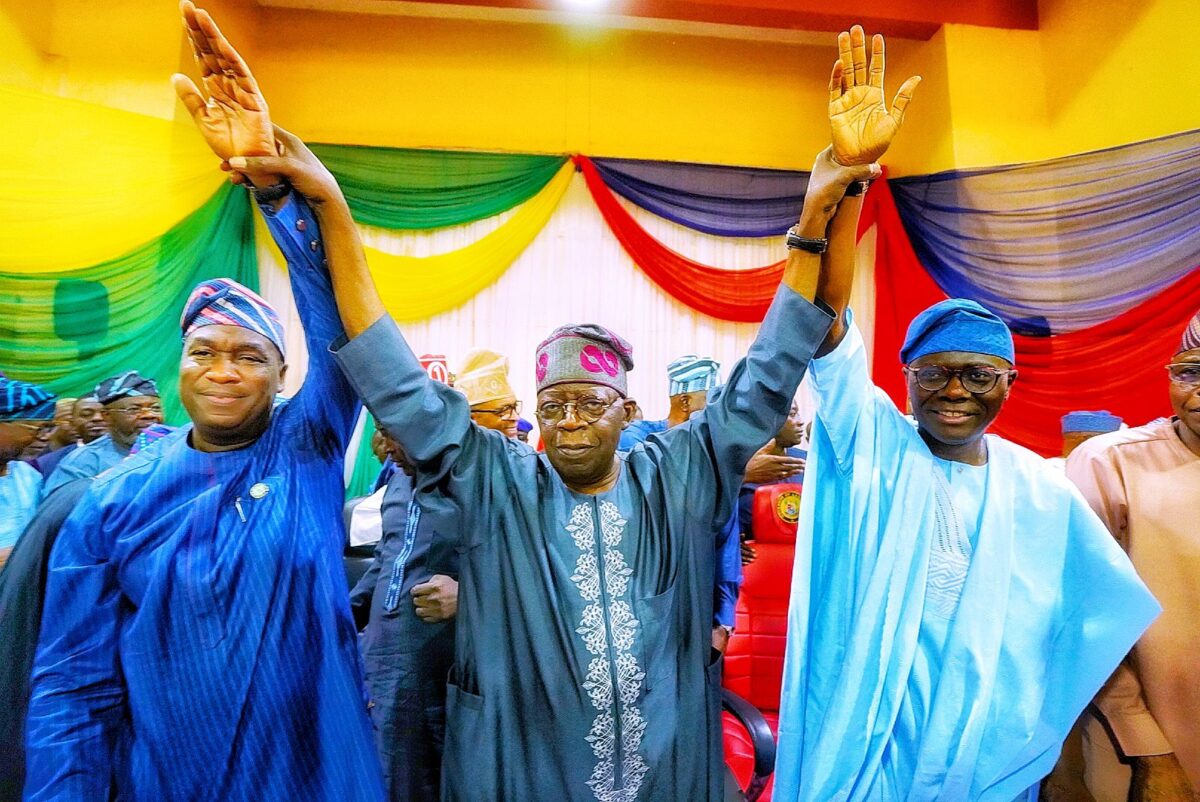 SANWO-OLU GETS CLEAN BILL TO RUN FOR 2ND TERM, AS TINUBU RAISES GOVERNOR’S HAND IN ENDORSEMENT

Will Governor Babajide Sanwo-Olu be the standard bearer of All Progressives Congress (APC) in the 2023 gubernatorial election in Lagos State? This question has finally been answered by an open endorsement of the Governor and his Deputy, Dr. Obafemi Hamzat, for a second term in office by the APC National Leader, Asiwaju Bola Ahmed Tinubu and the entire members of the Lagos State chapter of the APC.

At the party’s stakeholders’ meeting held at Adeyemi Bero Auditorium in Alausa on Friday, Tinubu physically raised the hands of Sanwo-Olu and Hamzat in approval of their bid to continue in office beyond 2023.

This development puts all rumours surrounding the recent endorsement of Sanwo-Olu for a second term by the Governance Advisory Council (GAC) to rest.

Tinubu’s endorsement of Sanwo-Olu and Hamzat has also laid to rest the speculations in some quarters, especially some online news platforms few days ago that the APC National Leader dumped Sanwo-Olu for a former Permanent Secretary in the Lagos State Civil Service, Mustapha Olorunfemi.

Tinubu said the Governor and his deputy have built an unbreakable team to raise the bar of excellence in governance and service delivery in the State, with visible achievements and progress to show for their efforts. This, the APC National Leader said, earned the duo the opportunity to return for second term, and not a blank endorsement which many politicians sought.

Tinubu, a leading presidential hopeful on APC platform, said Lagos under Sanwo-Olu’s leadership had remained a State of pride for residents and other Nigerians who crave responsive governance and progress.

He said: “We have a brilliant Governor at the helm of affairs, who is supported by his deputy to build an unbreakable team that has raised the bar of excellence in governance in Lagos. I specially thank Dr. Hamzat, who has been a very good assistant and a pillar of support to the Governor.

“Sanwo-Olu with Hamzat has raised an impenetrable team. I commend both of you and all members of the cabinet. You have all done wonderfully well and I must say that I am very proud of you.”

The raising of Sanwo-Olu’s hand by Tinubu was preceded by a motion moved by the Vice Chairman of APC (Lagos East), Hon. Saidat Oladunjoye, for open endorsement of the Governor by the party’s leadership. The motion was seconded by a member representing Alimosho Constituency in the House of Assembly, Hon. Kehinde Joseph. This attracted a resounding approval from all stakeholders in attendance.

The APC National Leader, however, said the party in Lagos would not prevent any aspirant vying for any position from testing their strength at the primaries, noting that all candidates that would be fielded by the party across elective positions must go through a delegate electoral system.

Tinubu said: “Aspirants who are showing interest in positions from House of Assembly to governorship, go and get your forms; you are going to contest primaries. There will not be any favouritism in the primaries.

“We want you to contest and test your popularity. Nobody will ask to step down for another aspirant. Let all aspirants mobilise their supporters; if you win, you win. If you lose, there will not be a refund of the nomination form.”

Tinubu charged all leaders holding the party structure at the local government level to rise above their challenges and work with the community leaders in their respective councils to mobilise for the APC victory at the general election.

He directed the resolution of all grievances and disagreements causing disaffection among party members ahead of the primaries, stressing that division would not bring any good to party candidates standing for election.

Speaking during the stakeholders meeting, Governor Sanwo-Olu disclosed that Asiwaju Tinubu paid the N50million fee for APC Expression of Interest and Nomination forms for his second term bid.

“Asiwaju Tinubu is a generous man and he is doing a lot for people. He paid for my APC nomination and expression of interest forms to run for the second term,” he said.

Sanwo-Olu expressed appreciation to Tinubu for his guidance and thanked the GAC leaders for standing by his government despite personal attacks they suffered from those the Governor referred to as “wayward children” who turned against the party elders after benefiting from them.

The Governor said it was time for the party members across levels to foster cohesion and work for the APC’s success in the State and at the federal level.

Sanwo-Olu, who described Tinubu as a “priceless symbol” of Lagos, said all hands must be on deck to ensure the State was not robbed of the presidential ticket of APC at the national primaries of the party.

He said: “It is time to come together as determined party members and show genuine love towards our National Leader, who is our priceless symbol and pride in Lagos. We are taking him national and we must ensure his house is fully united.“

The stakeholders’ meeting, convened at the instance of Tinubu, was attended by Lagos APC chairman, Pastor Cornelius Ojelabi, party executive members, GAC members, senatorial leaders and stalwarts across all local councils in the State.