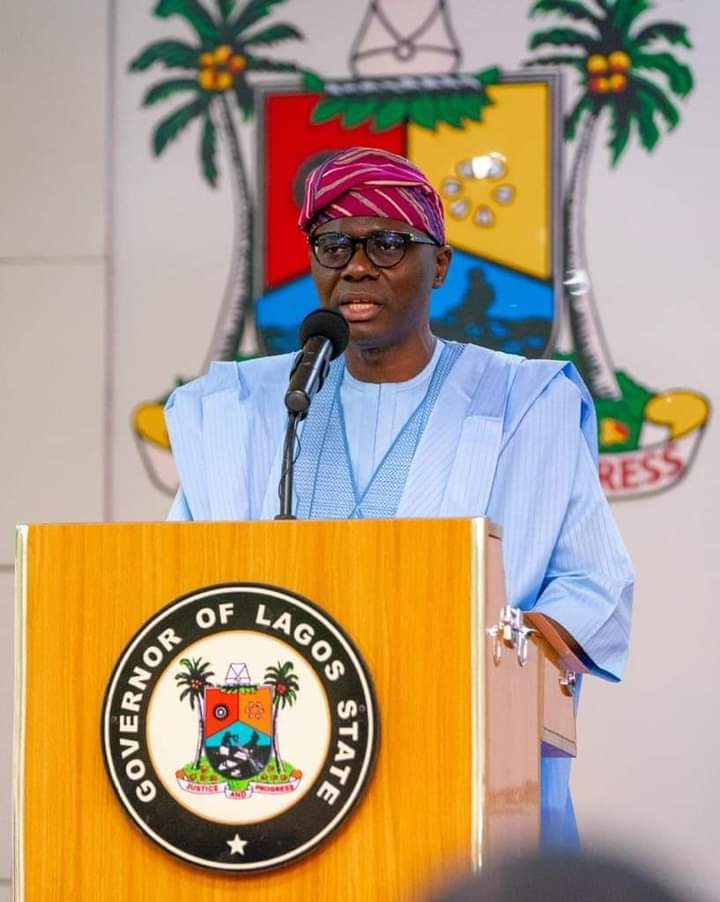 • Governor Flags Off Reconstruction of Another Set of Roads

Heavy flow of traffic associated with the perennial flooding in Ikoyi-Obalende area of Lagos State is now past, with the complete regeneration of four arterial roads network in the axis by Governor Babajide Sanwo-Olu.

The Governor, on Friday, commissioned the newly rehabilitated Thompson Avenue, Milverton Road, McDonald Road and Lateef Jakande Road, which are all in Ikoyi, Eti Osa Constituency 2.

The roads, which have a combined length of 3.75km, were in deplorable conditions, following the failure of the aligning drainage channels.
Last year February, Sanwo-Olu awarded the rehabilitation project to Julius Berger Nigeria Plc, with the aim of solving the persistent flooding on the roads and upgrading their designs for durability.

The projects brought relief to Ikoyi-Obalende residents, who turned out in fanfare to receive the Governor for the formal handover of the rehabilitated roads.

Sanwo-Olu said the delivery of the projects was a testament to his administration’s resolve to improve people’s living conditions through well-thought-out policies and programmes.

He said: “Our administration is cognizant of the fact that strategic investment in infrastructure is the foundation for long-term growth. We equally understand that, provision of adequate road infrastructure will generate a strong economic base for improved productivity and standard of living.

“Given the economic importance of Ikoyi as the real estate hub of Lagos and to address the perennial flooding issues peculiar to the axis, we formally flagged off the regeneration work last year July, comprising upgrade of the roads and drainage channels in the area.

Today, it is gratifying to note that, we have re-engineered and reconstructed these roads network for efficiency and improved traffic flow. We have also addressed perennial flooding in the area.”

To further improve traffic connectivity in Ikoyi, the Governor, on the spot, approved immediate rehabilitation work on three other arterial roads in the area. They are Cooper Road, McPherson Road, and Queen’s Drive.

Sanwo-Olu disclosed that similar regeneration projects were currently being carried out in other areas of the State, including Lekki-Epe, Victoria Island, Alimosho, Kosofe, Ojo, Lagos Island, Badagry, Ikorodu and Ikeja GRA. This, he said, is part of the efforts by his Government to bring development to all communities in the State.

He urged commuters and residents to protect the roads from activities that may damage their features and designs.

He said: “Maintenance of these roads is the collective responsibility of the Government and members of the community. We are ready to collaborate with the Residents’ Association and Community Development Association to develop and promote local initiatives for the community to participate in the maintenance of this network of roads to reduce road damage and infrastructure theft.”

Special Adviser on Works and Infrastructure to the Governor, Mrs. Aramide Adeyoye, said the projects were in line with the Sanwo-Olu administration’s resolve to connect more communities and residents with roads.

She said the projects held considerable socio-economic benefits for residents living and working in Ikoyi.

She said: “The rehabilitation work will abate the perennial flooding and erosion usually experienced within the axis. The roads will also reduce vehicular congestion, decrease travel hours for commuters, enhance safety and security along the corridor, and provide aesthetically pleasing environment that will further increase property value.”

An Ikoyi resident and member of Governor’s Advisory Council (GAC), Mr. Wale Edun, gave a thumbs up to the Governor for turning around the roads, which, he said, were in a “woeful state” before their rehabilitation.
“We thank the Governor for this intervention, which has brought the long sought relief back to the area. Residents can now live without the fear of flood,” Edun said.

Hon. Gbolahan Yishau, representing Eti-Osa Constituency 2 in the House of Assembly, described the projects as “needed catalyst” to boost socio-economic activities in the Ikoyi-Obalende, conveying residents’ appreciation to the Governor on the projects.

After the commissioning, Sanwo-Olu joined residents in a long trek on the roads to confirm the quality of work done by the contractor.

Wife of Lagos State Governor, Dr. Ibijoke Sanwo-Olu
Previous Post
We need to show example of leadership in anyway we find ourselves… Engr Osaro Odiase.
Next Post
You May Also Like