SA diaspora bags a recognition and conferment of a chieftaincy titled in ISU kingdom of Imo state. 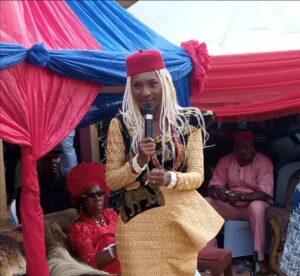 SA Diaspora Imo State, receives a Chieftaincy title in recognition of her selfless commitment to the community;
It is indeed a handpicked ‘strictly on invitation’ Chieftaincy Conferment Event yesterday the 2nd January 2021 for Ugochi Celia Osakwe-Hibbert Special Adviser to the Imo State Governor on Diaspora Affairs. This was an exclusive event as Chief Adaejiagamba was the only person who received a title yesterday at Eze Agbanyim’s Palace, a statement of privilege and double honour, rarely accorded to anyone. 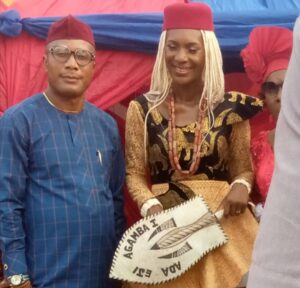 In Igbo land it is not everyday you see women being conferred with Chieftaincy title, and rarely women in their 30’s. Although for this young lady Chief, Honourable, Councillor, Celia Osakwe-Hibbert, there were more people than less, in agreement that it is a well deserved honour. Her nomination for the Chieftaincy title came from several high profile individuals in the Imo State Community including the Igwe Gedegwum of Orlu. Who described Chief Hon. Celia on the day as a very “outstanding woman to Governor Hope Uzodimma’s Government. “Celia is very focused and does actually deserve more of these titles. She’s a role model to our young women in Imo State” His Royal Majesty stated. 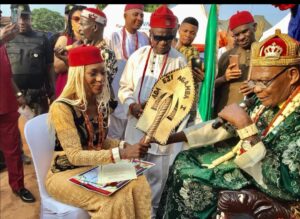 Several attendees echoed the same sentiments. Chief Dr. Lambert Orisakwe, the Commissioner for Agriculture who beautifully chaired the ceremony reminded guests that Celia is one of the rising stars in Orlu Zone political circle. The Commissioner who is also from Isu, Orlu Zone thanked the Orlu Community for acknowledging that “this young lady is worth this highly revered honour of Chieftaincy Title. Eze Agbayim nodded in absolute agreement.

Some of the legacy works Chief Celia carries out are around equality, equal opportunities, inclusion and diversity. Chief Honourable Councillor Celia Osakwe-Hibbert is a strong voice when it comes to Equality Issues and Community Development, in both the local and international community; first Black Elected Councillor currently serving the Penn Ward, Wolverhampton, United Kingdom. Little wonder the Igbo Progressive Union U.K sent a representative with cash donation in support of the Chieftaincy ceremony yesterday.