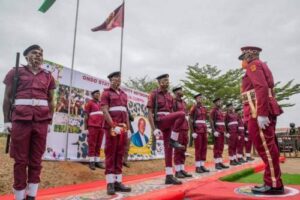 The advice was contained in a press statement issued on Monday 28th September, 2020 by the Director of MURIC, Professor Ishaq Akintola.

“We advocate for the recruitment of members of Oduduwa People’s Congress (OPC) into the new South West security initiative codenamed ‘Amotekun’. OPC deserves that preference because it was the only known militant organization which confronted the military during the June 12 struggle. Their leaders were incarcerated on account of the just struggle for the actualization of MKO Abiola’s high-jacked mandate.

“Apart from this, OPC played a central and unforgettable role in bringing sanity to the South West during the proliferation of armed robbery attacks between year 2000 and 2015. Their performance was heroic and they are still very much around. This was a period when even the police relied on the OPC for community policing. Many armed robbery suspects were apprehended with the help of OPC and handed over to the police. To a large extent, therefore, the South West owes the peace it enjoys today to the OPC.

“It is our considered opinion that South West governors should not forget these heroes in the ongoing recruitment exercise into Amotekun. We have observed attempts by charlatans to hijack the project. Two fraudsters were recently arrested for defrauding applicants: one Kareem Taiwo who claimed to be an Amotekun officer in Ibadan and Adeyemi Agboola, a cybercafé owner in Oyo town.

“OPC members are in every ward in Yorubaland. They know the territory very well. They are bold. They also have the experience in confronting criminal elements. Many communities in Yorubaland today employ OPC members as night guards. They are therefore used to night patrol and overnight duty. They did it when they were not being paid one kobo. This is the time to compensate them. They will be more reliable in combating criminality.

“Our suggestion is without prejudice to the recruitment of seasoned security personnel like retired soldiers and ex-police officers. But members of OPC will be good foot-soldiers for Amotekun. The handlers will be ignoring OPC at their own peril.

“OPC members should not be pushed to the background under the excuse that they are not ‘educated’. We affirm that emphasis on educational qualification as a pre-requisite for recruitment into Amotekun is a product of colonial mentality. OPC provided security for the region in the past without possessing certificates.

“For the umpteenth time, we reiterate our principled stand on the need for Amotekun to provide security for all residents in Yorubaland without any ethnic or religious stereotyping. Any arrangement meant to complement the efforts of the Nigerian security agencies is a welcome exercise.

“Meanwhile we advise the general public to ignore rumours of a purported meeting between MURIC or its director and an ethnic group over Amotekun. It is another desperate attempt by unscrupulous elements and shameless liars to divert the attention of the public from their nefarious activities.”