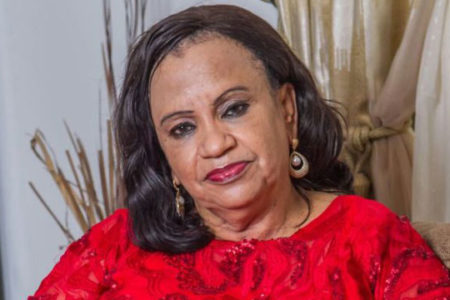 Lagos State Governor, Mr. Babajide Olusola Sanwo-Olu, has stated that the late Princess Adenrele Adeniran-Ogunsanya will always be remembered for her immense contributions to improved governance during her tenure as the Secretary to the State Government (SSG) between Y2007 and Y2011 under Governor Babatunde Raji Fashola’s administration.

Sanwo-Olu disclosed this in his address at the Wake Keep and Tribute ceremony organised to celebrate the life of the former SSG at Harbour Point Marquee, Victoria Island, Lagos over the weekend.

He said: “Princess Adenrele gave her best through effective and efficient delivery of Cabinet responsibilities and also associated with her colleagues as a team player, which further improved communication across Ministries and Agencies of Government for prompt implementation of government policies”.

Sanwo-Olu, represented at the event by the Secretary to the State Government, Mrs. Folashade Sherifat Jaji, said the deceased deployed her resources to uplift those at the grassroots ahead of people in her immediate community, adding that her benevolence was indeed commendable.

His words: “She made a significant impact in Lagos politics, especially in Ikorodu division. The late Princess Adenrele was lively, intelligent, fearless, forthright and accommodating as an entrepreneur and politician who will be sorely missed by Lagos State Government, her family, friends and political associates”.

Commiserating with the family of the deceased, the Lagos State Governor admonished them to focus on the loving memories they shared with her by upholding her legacies of uplifting the less privileged.

In his exhortation at the funeral service, Pastor Ituah Ighodalo of the Trinity House enjoined everyone to do good while living as the good deeds would be remembered long after death.

The remains of the late Princess Adenrele Adeniran-Ogunsanya, former Secretary to the Lagos State Government (2007 – 2011) was thereafter laid to rest in Ikorodu.

In attendance were former Lagos State Deputy Governors, Princess Adejoke Orelope-Adefulire and Mrs. Sarah Sosan; Commissioner for Establishments, Training and Pensions, Mrs. Ajibola Ponnle; the Special Adviser on Housing, Mrs. Toke Benson-Awoyinka; former members of the Lagos State Executive Council, members of the All Progressive Congress (APC) and other distinguished personalities from Lagos State and other parts of the Federation.