NASS Gives CAC Pat On The Back On Reforms 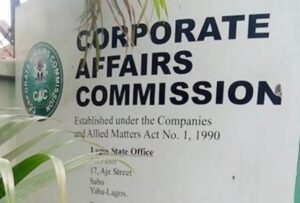 The commendation came shortly after the Chairman Senate Committee on Trade and Investment Senator Francis Fadaunsi OFR, alongside other Senators visited the Commission’s Portharcourt Office as part of their oversight function.

Senator Fadahunsi stressed that the Registrar General, Alhaji Garba Abubakar deserves a pat on the back for what he called the great work he was doing particularly the reforms being undertaken to make registration easy.

The Senate Committee noted with delight the Commission’s digital transformation thereby contributing immensely to the growth of the Nation’s economy.

The committee therefore charged the Commission to sustain the tempo noting that registration processes were now faster.

He enjoined him to keep up the good work by improving the Commision’s revenue in order to remit more operating surplus to the Federation Account.

Senator Fadahunsi on behalf of the committee used the forum to thank President Muhammadu Buhari for appointing what he called a brilliant young man to head a very important government agency like the CAC.

The Vice Chairman of the Committee Senator Elisha Ishaku and colleagues also in their separate remarks applauded the Commision’s reform initiatives and urged the Registrar General to sustain the tempo.

Highlights of the visit include facility tour and interaction with staff of the CAC Portharcourt Office.