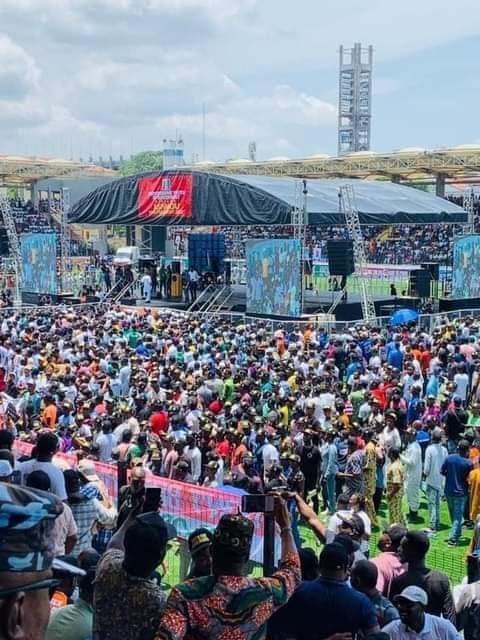 …Sanwo-Olu To Youths: ‘Your Role In Tinubu Presidency Is Not Negotiable’

A movement of youths across the Southwest region, on Saturday, took a powerful stand ahead of the All Progressives Congress (APC) presidential primaries slated for next month. The young people, in their thousands, converged on Lagos State to endorse the presidential aspiration of the APC National Leader, Asiwaju Bola Ahmed Tinubu.

The Mobolaji Johnson Sports Arena in Onikan was filled to the brim, as a mammoth crowd of youths under the aegis of Progressive Youth of Southwest declared and pledged their support for Tinubu, whom they described as “contender with clear vision and high capacity”.

Tinubu’s vision for growth and development, the youths said, has been experimented in Lagos, taking a city in distress in 1999 to envious heights of economic prosperity.

The political rally was organised at the instance of all the youth leaders of the party across the region.

The rally was joined by various other youth groups, including young House of Assembly members across the Southwest states, National Youth Council of Nigeria (NYCN) chairmen in the Southwest, Joint Campus Committees (JCCs) of the National Association of Nigerian Students (NANS), National Union of Lagos State Students (NULAS) and youth arms of various ethnic nationalities in the Southwest and indigenous communities.
Also, hip-hop artistes and Fuji musicians were at the rally to show solidarity for Tinubu, entertaining the crowd with various endorsement songs. Comic youth preacher, Oluwatoyin Bayegun, popularly known as Woli Arole, and his colleague actor, Asiri (Damilare Osundare), compered the event.

Governor Babajide Sanwo-Olu gave a hint on what the youths should expect when Tinubu is elected president, noting that the APC leader had been a passionate supporter of youths.
Aside from giving opportunities to youths to flourish in their areas of activities, the Governor said young people would be part of the major drivers of the Tinubu presidency.

Sanwo-Olu, accompanied by his Deputy, Dr. Obafemi Hamzat, and other cabinet members, gave a thumbs up to the conveners for what he called “an overwhelming support” shown at the rally.

The massive crowd, the Governor said, was an indication of the firm belief in the competence and capability of Tinubu to lead in the next political dispensation.

The Governor said: “I thank our teeming youths across the Southwest for coming to declare this overwhelming support and endorsement for your great leader, Asiwaju Bola Ahmed Tinubu, to become the next president. Asiwaju is the only person who will ensure the youth stand as stakeholders in the next Government.

“The endorsement you give to our leader is one step towards realisation of the Tinubu 2023 project. The most important step is to turn out bigger at the delegate election and complement your support with votes for Asiwaju to win the party’s nomination as presidential flag bearer. Come next year, by the grace of Almighty, we will all be going together for Asiwaju’s inauguration in Abuja as elected president.”

Tinubu described the support rally as “massive”, saying he would show gratitude for the endorsement by working hard to positively change the story of the country for young people.

The APC National Leader said young people could no longer continue the lamentation of the past, but must brace themselves to work for a new nation that would have limitless opportunities and possibilities.

The youths, Tinubu said, must eschew politics of bitterness and disunity, urging them to lend themselves to projects initiated to change the story of the nation for good.

Tinubu said: “I am here, not for myself, but for you and our collective future which our youths represent. We feel your anger whenever you are angry; I will never blame you for that. The promises of the past have not done enough to help you build a future from the onset. But, I disagree with the excuses that we cannot help it; we can help it. All you need is courage, determination and perseverance. You must develop the can-do attitude; you must have the grit and determination to change the story of poverty and banditry.

“We cannot continue the lamentation of the past. We have to brace up for new Nigeria. You have to be ready for the task ahead. If you have no voter card, go and get it. If you have it, go for revalidation of your card. You cannot be part of 1.4 billion youths using Instagram and have no PVC to vote. The youths are the reason why I am here to contest. I want to be president for you all; commit yourselves to this project and drive me there.

“All we have to do is to build a united Nigeria. When we started in Lagos, we used to pick dead bodies on the streets. Today, Lagos is one of the most progressive States. We can build a new Nigeria, where prosperity will not be isolated and limited to the family of the poor. A united Nigeria is our dream, a free Nigeria is our commitment and a violence-free Nigeria is what we promise we will hand over to you.”

APC National Youth leader, Dayo Israel, said the youths had the choice to make in deciding who becomes the next president, but said their choice must be given to a leader who had been tested and could be trusted for progressive leadership.

Lagos APC Youth Leader, Dr. Murtala Seriki, said Tinubu had impacted various homes, with his brand of programmes he initiated while he governed Lagos.
Seriki urged the youths to sustain the support for the presidential hopeful, noting that young people would not regret their decision to queue behind Tinubu in the next general elections.

Leo Obasi, Ndi Igbo Youth Leader in Lagos, described Asiwaju as “a unifying factor, detribalised politician”.
“Such leader must be given the chance to lead the nation and foster unity,” Obasi said.