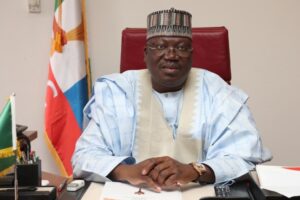 President of the Senate, Ahmad Lawan, on Tuesday, advocated for stiffer penalties for anyone caught in possession of firearm not legally procured in Nigeria.  According to him, the issue of insecurity across parts of the country would have been nipped but for the continued illegal proliferation of firearms in the country. Lawan made this known in his concluding remarks after the Senate considered a bill seeking to amend the Firearms Act, 2004 He said: “The security situation would have been far better, if we were able to control the proliferation of firearms in the country. “This bill, like the sponsor mentioned, was passed in the 8th Senate. Now that we have brought it back, when it will be referred to the Committee – Judiciary, Human Rights and Legal Matters – they should engage with the executive arm of government to see where the issue is, if that has not been done by the sponsor of the bill. “But, I believe that there is no compromise for stiffer penalties for anyone caught with an illegal arm.” The Senate President, while expressing optimism about the readiness of the Executive in addressing the nation’s security challenges, pledged the willingness of the Legislature to ensure an improved situation for Nigerians.  “The security situation can still be reversed, once we continue to remain focused and committed. And, for us in the a National Assembly, it has been a very difficult time, probably the most difficult time, because our people face this daily security challenges, and, the question is always, what are you people doing? “Unfortunately, the Legislature is limited in what it can do. It cannot implement, but it can talk about it, debate and insist on it.  “I believe that this Executive is ready to do something to improve the security situation. Now that we are seeing a different or an improved approach, maybe the end to the insecurity in the country is at sight.  “Recently, of course, we have seen the National Security Adviser, working with the Service Chiefs and others in a coordinated manner. We pray that this is sustained, and that for us, we will give them every possible support,” Lawan said.  Earlier, sponsor of the Firearms Act 2004 (Amendment) bill, Senator Uba Sani (APC – Kaduna Central) said the aim of the proposed amendments is to curtail the proliferation of illegal arms and effectively address some of the security challenges currently plaguing Nigeria.  According to the lawmaker, “the United Nations Regional Centre for Peace and Disarmament in Africa (UNREC) recently reported that proliferation of illicit small arms and light weapons (SALW) in Nigeria has reached an alarming proportion. “Analysts estimate that out of the 500 Million weapons that may be circulating in West Africa, 350 Million, Which represents 70% of such weapons, can be found in Nigeria.”  He added that, “on the 31st of January 2017, the Nigerian Customs Service confirmed the interception and seizure of 661 Pump Action riffles imported illegally into the country from China. Had such weapons escaped the eagle eyes of our Custom officers and found their way into our communities that are in the grip of murderous elements, we would have had a clearly unmanageable insecurity  situation.  “Nigeria is one of the countries experiencing some of the most devastating effects of the proliferation of illegal weapons as a result of spill over effects of the crises in Libya and Mali as well as unresolved internal conflicts in parts of the country such as the North East, Niger Delta and other regions. “We therefore need a legislation that will provide for stringent punishments to deter perpetrators of these illegalities.”  The lawmaker listed the objectives of the bill to include: imposing stiffer penalty for offences under the Act from to serve as deterrent and strengthen the current effort, geared towards control of illicit firearms influx into the country and in the possession of individuals; to establish a comprehensive and coordinated disarmament and arms destruction ceremony for Nigeria through the Office of the National Security Adviser to ensure that confiscated illegal firearms do not re-enter the society. Others are: to provide for a stipulated time within which the destruction of unserviceable firearms must be carried out, except where there is a valid court order to the contrary; to proffer an effective, coordinated and sustained legislative strategy to address the underlying factors encouraging the circulation of arms and concurrently block the outlets through which illicit firearms are proliferated; and to take proactive measures in stopping easy access to and re-circulation of illegal  arms in our communities.  Sani assured that the Bill, when passed by the National Assembly and assented into law by President Muhammadu Buhari, would “help in degrading the criminal elements in our communities”, and “deny them of the weapons which serves as the oxygen for their operations.” The Bill after consideration, was referred by the Senate President, Ahmad Lawan, to the Senate Committee on Judiciary, Human Rights and Legal Matters for further legislative work.  The Committee which is Chaired by Senator Michael Opeyemi Bamidele (APC – Ekiti) is expected to report back in four weeks.