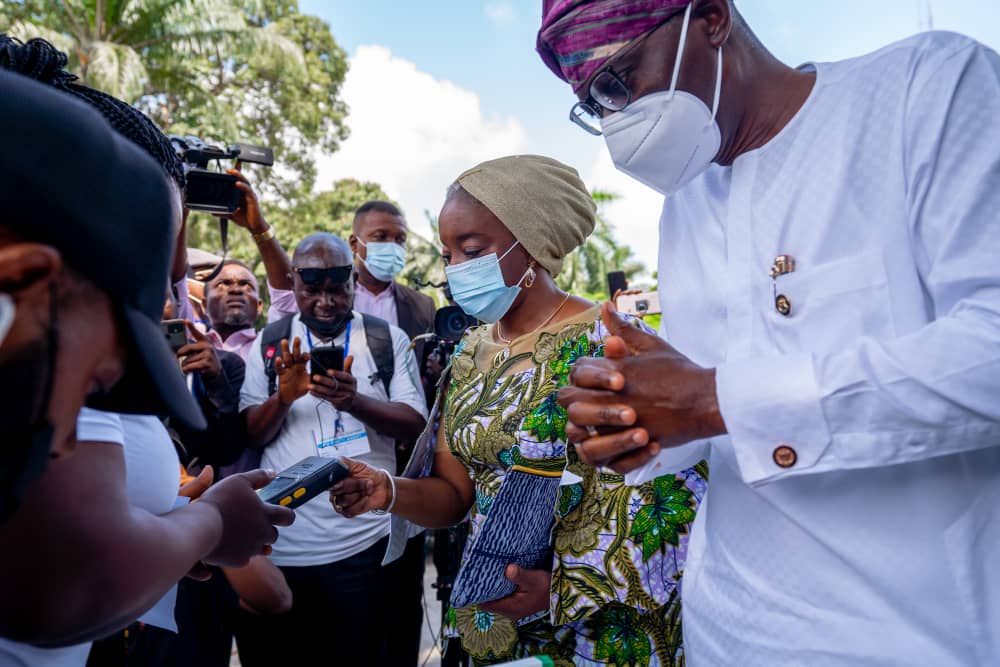 Lagos State Governor, Mr. Babajide Sanwo-Olu, on Saturday reassured Lagosians that his administration will continue to make life better for the citizens.

He gave the assurance while speaking to journalists shortly after casting his vote at Polling Unit 019, Femi Okunnu/Lateef Jakande, Ward 09 Ikoyi II, Eti-Osa Local Government Area of the State.

Governor Sanwo-Olu who arrived the polling unit alongside his wife, Dr. Ibijoke Sanwo-Olu at 11:03am and voted at 11:08am, said the recent upgraded and rehabilitated network of roads, comprising Thompson Avenue, Milverton Road, MacDonald and Lateef Jakande Road in Ikoyi, Eti-Osa Local Government Area, is a reflection of what is happening in all our local government areas in Lagos State.

“We are doing construction works everywhere in Lagos State. What you see here (Lateef Jakande Road) is a reflection of what is happening in all our local government areas. Like you observed, two years ago, this particular road,  Lateef Jakande was not like this and now it is wearing a new look. We are doing same thing in all our local governments and other places in the Lagos State. I believe that the whole idea around governance is to improve and make life better for our citizens,” he said.

Speaking on the local government elections, Governor Sanwo-Olu commended Lagosians for participating in the council polls and promised that the State would increase voters’ education and enlightenment to ensure robust participatory democracy.

He said the beauty of democracy is for people to elect their representatives through free and fair elections.

“This is about the only time when we can express ourselves freely and openly. Talking about low percentage of voters, it is a reflection of the society. We need to encourage more participation and increase advocacy for the citizens. All the infrastructure and logistics have been provided by the Government. It is really for our citizens to come up and express themselves. So, it is work in progress; that is the beauty of democracy.

“For some other countries that we follow, they have been on it for over 200 years and you will see that there is never an election where you have 100 per cent but you continue to improve on the advocacy and everybody has a role to play. This is another clarion call for our people tn.vo come out and express themselves willingly,” the governor said.

READ WHY NIDCOM BOSS Discussed WITH NIDO UK-SOUTH ON GIVE-BACK TO SOCIETY
Previous Post
Olu of Warri: Prince Tsola, An Epitome Of Itsekiri Royalty.
Next Post
You May Also Like