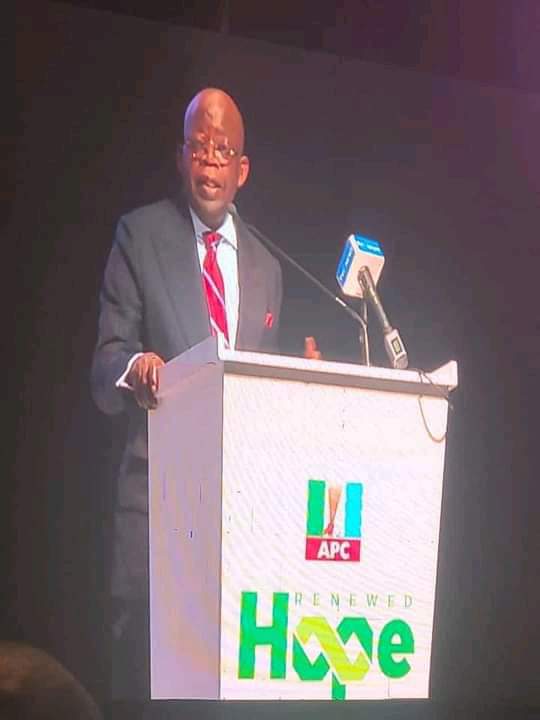 LAGOS APC REMAINS UNBEATABLE, TINUBU BOASTS AS HE REUNITES WITH POLITICAL BASE

…Says party has become stronger than he left it

All Progressives Congress (APC) National Leader, Asiwaju Bola Ahmed Tinubu, returned to his political base for the first time after winning the party’s presidential ticket in fiercely contested primaries.

Tinubu was at Lagos APC secretariat on Acme Road in Ogba on Wednesday for the party’s caucus meeting, shelving other engagements to reunite with his political family.

Activities in the area were brought to a halt, as Lagos APC leaders, Governor’s Advisory Council (GAC) members and thousands of party faithful received the presidential candidate.
Governor Babajide Sanwo-Olu led all members of the State Executive Council to the meeting presided over by the Lagos APC chairman, Pastor Cornelius Ojelabi.

Tinubu told the gathering that he returned to his political base to meet the Lagos APC family stronger than he left it. He said those entrusted with the administration of the party affairs after he weaned himself off the supervisory duty had not made him regret his decision to pursue his presidential ambition.

Tinubu passed a vote of confidence on Sanwo-Olu and other party leaders for nurturing the APC political machinery in the State, stressing that the party remained unbeatable in Lagos.

He said: “I left Lagos for Abuja, leaving the party members with Sanwo-Olu, Hamzat, leaders of the Governor’s Advisory Council and other party leaders.

They are the ones who released me to go to Abuja to contest. I left with many doubts and I was uncertain about what would be the fate of the party. I was constantly in touch with the Governor and his deputy.

“Sometimes, I would call the party chairman and ask them if we were doing the right thing in Lagos. The reports they always gave me gave me more courage and confidence to move on with my engagement in Abuja. I thank all of our leaders for keeping the party stronger. I handed over to you an undefeated platform in Lagos. The manner with which the party affairs have been conducted shows these people have fairly managed the home base.”

Tinubu recalled that his journey to secure the party’s presidential nomination in Abuja was littered with uncertainties, but said the support raised from Lagos APC leadership boosted his confidence to move on and win the primaries.

The party’s National Leader said he was in the presidential race to win, but said his fate was in the hands of the party members who, he said, must work hard to get votes for the party at the polls.

Tinubu urged party supporters to move out to the communities in their numbers and canvass voters. The work, he said, must start with the 57 local council chairmen, charging them to reach out to aggrieved members of the party at the grassroots in order to deliver more votes for APC at the general elections.

He said: “Our Local Government chairmen must do better than any other person in delivering votes for our party. You met this party already built with structures across the communities. There may be little cracks here and there, you know what to do. Manage your anger. There is no politics without anger and pain. But with the pain comes the joy of victory.

“We are giving you an assignment to go back and recruit others. We must forget about the opposition, let’s put out effort on the voters. This is the time to reach out to aggrieved members and invite them back to the party fold. This is not the time to be angry and spill the beans. We must work together to achieve the bigger goal before us.”

Sanwo-Olu said APC in Lagos was facing the most critical election, noting that winning the presidency would be the biggest political prize to win.

The Governor told the party supporters not to rest on their oars, asking them to work for the party’s victory across boards.

He said: “Asiwaju has done several things for all of us in one form or the other. He has come to this same place to support several of us as governors, senators, House of Representatives, and House of Assembly members. He has done the assignments effortlessly in the past 23 years without asking for anything.

“God has now given us the unique opportunity today for us for the first time to also raise his hands up as our donation of the best in class to the entire country. I urge all of us to work for the victory of Asiwaju at polling unit by polling unit, ward by ward, and local government by local government.”

The Governor was in the company of the APC Vice Presidential candidate, Sen. Kashim Shettima, and Kano State Governor Umar Abdullahi Ganduje to the forum where he met with the leadership of various Hausa traders in the area.

The consultation turned out to be a political rally, as youths in the area displayed various banners in support of Tinubu’s presidential ambition and Sanwo-Olu’s re-election.

The Lagos Governor said the consultation was part of his political discussions with non-indigene groups residing in the State, thanking the Hausa-Fulani community for supporting the efforts of his administration to scale up infrastructure and amenities in the LCDA.

He said: “I’m happy to join you today in furtherance of our consultation on the future of our State. I thank you for the peace and tranquility enjoyed among all non-indigene groups in this part of Lagos. We can only achieve our development goals when we stay united and work together. Iba LCDA has not been left out in our development programme.

“You have seen the good work we are doing in Iba and the infrastructure projects we are delivering in this area. We will be completing the Lagos-Badagry highway soon. The stretch towards Okokomaiko is the final work, which will be completed by the end of the year. The General Hospital we are currently building in Iba will also be completed. We will move inside Ojo and take up Kemberi-Afromedia Road.”

Ganduje, who spoke in Hausa, said he offered to meet with the Lagos Arewa community because of the need to speak with one voice with respect to electing Tinubu as president and continuation of Sanwo-Olu’s mandate, as well as all APC candidates from the State.

Tinubu, the Kano helmsman said, embodied all qualities of a thoroughbred and detribalised Nigerian, saying the APC presidential standard bearer accorded utmost respect to all tribes, cultures and faiths.

Ganduje said the decision of the North to back Tinubu for president had already been sealed. What remains, he said, is for Lagos to produce votes that will supersede the voting strength for the APC.

He said: “We are here today with good tidings and we have brought you good news. As far as the Northern part of this country is concerned, the issue of Tinubu presidency is already completed. We are waiting for you Lagosians to come out and support this with your votes. In Kano, Asiwaju will get more votes than any state will give him. We challenge you Lagosians to promise us that you will defeat Kano in the choice of Tinubu.”

Shettima said 2023 would be a payback time for Tinubu in the North, given that the APC presidential standard bearer had backed candidates from the North in previous national elections.

“For us in the North, this is a payback time for Tinubu. We are people of honour; we must honour our pledge and commitment. We urge you to vote for all candidates of APC in Lagos, from president to governorship and all legislative offices. I call on you to vote en masse for Governor Sanwo-Olu and support his good work,” Shettima said.

Responding on behalf of the Arewa community, Badaru said Hausa people in Lagos remained committed to the cause of APC and would double their efforts to ensure the party’s candidates in the State got elected.